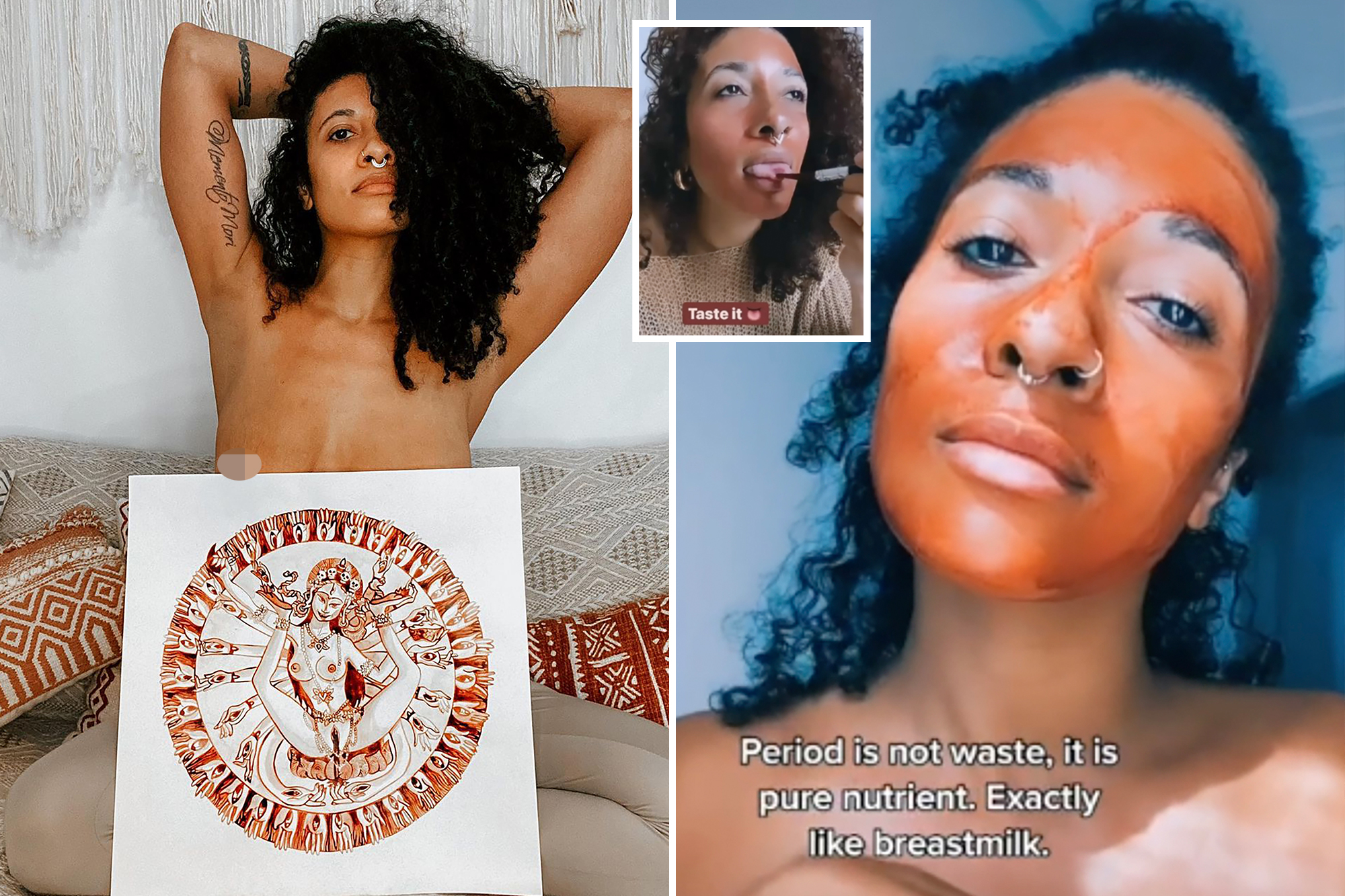 A Spanish influencer has revealed that she imbibes her own period blood to improve her health and well-being — a practice that scientists believe is bloody stupid.

“Your menstrual blood is pure medicine,” Jasmine Alicia Carter, 30, told News Dog Media of her alleged panacea, which she frequently posts about to her 22,800 followers on Instagram.

A self-appointed “Sacred Woman’s Empowerment Mentor,” the Barcelona native’s goal is to help women “understand and reclaim the inherent sacredness that lies within their entire menstrual cycle.

“We are here because of our vaginas and our blood and women don’t take enough credit for that,” claimed Carter, who feels that women have historically been “taught to be ashamed of our periods.”

She even theorizes that tampons and menstrual pads contain chemicals to “hide our blood and compromise the natural functioning of our periods,” which she claimed are “packed with all the nutrients we need.”

In order to take advantage of these supposed health benefits and shed the stigma, the menstrual health advocate reportedly drinks her own period plasma on the reg.

Carter demonstrates how to apply a menstrual face mask.@jasminealiciacarter/News Dog Me

“When I drink my period blood, I will usually squat on the toilet, remove my menstrual cup and take a sip,” Carter explained to News Dog Media. “I’m so connected to my body that I know exactly how much blood to drink.”

She added, “Sometimes it’s just a sip and sometimes it’s a whole menstrual cup, because I need more nutrients.”

Some of Carter’s menstrual blood paintings. @jasminealiciacarter/News Dog Me

Those nutrients, according to Carter, include protein, iron, copper and selenium, as well as antimicrobial properties and even regenerative stem cells. However, current research states that menstrual blood can be a breeding ground for bacteria.

Still, the social media star claimed that the healthier the person, the better their period blood.

“Your period blood won’t [be] as good if you’re eating junk food every day, for example, because your nutrients will be poor,” Carter explained of the vampiric-seeming trend. “But when you’re in tune with your period, then you know how much you need to drink and can feel the benefits.”

Carter feels that women are shamed for having periods.@jasminealiciacarter/News Dog Me

Of course, Carter claims drinking period blood isn’t the only way to purportedly benefit from this alleged menstrual medicine.

“When I first put my fresh menstrual blood on my face, it felt so natural,” gushed the monthly re-cycler. “The feeling is very refreshing and cooling on the skin.”

The gal, who also boasts 12,300 followers on TikTok, added that “although I’ve never had major skin issues, I can definitely feel that my skin looks at its best now because of these face masks.”

Carter encourages her followers to have a more positive attitude about menstruation.@jasminealiciacarter/News Dog Media

And while a menstrual mask might evoke something out of a slasher flick, Carter claimed her husband has gotten used to her wearing it around the house.

Too squeamish to give your face a bloodbath? Not to worry: Women can reportedly also embrace their menstrual cycles in other ways, including painting “period pieces” — which the blood-lover frequently showcases on social media — and even sprinkling it in the garden as a “natural fertilizer.”

“I don’t expect everyone to be obsessed with their period blood the way I am,” said Carter. “But I do encourage women to collect and observe their menstrual blood to see what it can tell them about their health.”

Despite her sanguine convictions, dermatologists say there isn’t any evidence to back up the notion of period blood as a medicinal holy grail.

“In theory, menstrual blood has many properties that are beneficial to the skin, such as anti-inflammatory properties and stem cells, but there is no current scientific evidence that supports the use of menstrual blood as a mask,” Texas dermatologist Jennifer Vickers told Cosmopolitan.

Not to mention that period blood is difficult to extract “in a sterile way, so there is a concern about transferring disease from the genitals to the face,” added Vickers. “If, for example, a woman is infected with human papillomavirus or herpes simplex, menstrual blood could potentially serve as a means for transmitting these viruses to facial skin.”

Carter with her husband Suriya and son Rav.@jasminealiciacarter/News Dog Me

Nonetheless, Carter isn’t the first to swear by baptizing themselves in blood. In 2019, a beauty blogger was slammed online for promoting vampire facials — a beautification technique that involves harvesting one’s own plasma and injecting it back into the skin to supposedly prompt rejuvenation.

First made famous by Kim Kardashian, the procedure can reportedly put people at risk of deadly sepsis, experts say.

Experts say slathering oneself in period blood can put you at risk of infection.@jasminealiciacarter/News Dog Me

Scientists have dismissed the notion of period blood as a cure-all.@jasminealiciacarter/News Dog Media

She uses her own natural dyes.@jasminealiciacarter/News Dog Media