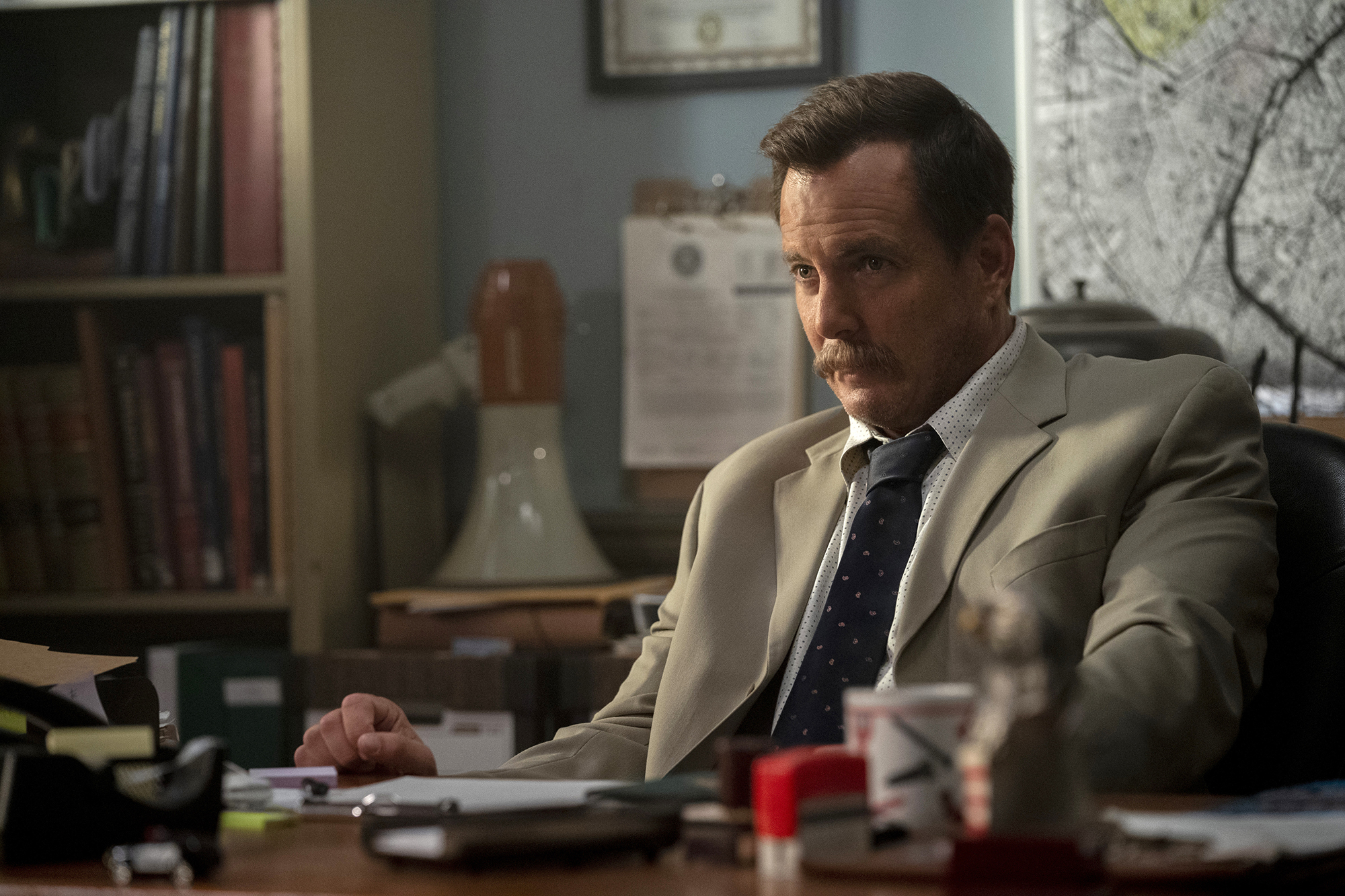 Will Arnett and a supporting cast of celebrity guest stars take a novel trip to “Murderville” in the new Netflix comedy series premiering Thursday (Feb. 3).

The concept, adapted from the BAFTA-winning BBC3 series “Murder in Successville,” posits Arnett as Terry Seattle, a chief homicide detective straight out of a ’70s-era cop drama (mustache, bad wardrobe) who works for the City Police in an unnamed metropolis (and “no, I’ve never been,” he says of Seattle. Terry’s partner, Lori Griffin (Jennifer Aniston’s face graces her memorial plaque in line with the celebrity theme) was murdered 15 years ago, and he’s kept her desk exactly as it was that day (it’s full of cobwebs, a hideously moldy sandwich and the skeleton of her pet rabbit … Terry isn’t the sharpest tool in the shed).

What Terry can’t seem to keep is a steady partner, so his boss/estranged wife, Chief Rhonda Jenkins (Haneefah Wood), brings in a steady line of new Detectives-in-Training. These are played each week by different celebrities — Conan O’Brien, Annie Murphy, Marshawn Lynch, Sharon Stone, Kumail Nanjiani and Ken Jeong (who’s on way too many TV shows) — who are not shown the script, so they improvise their way through the action.

Lilan Bowden (left), Will Arnett and Marshawn Lynch in an episode of “Murderville.”DARREN MICHAELS/NETFLIX

The stars play themselves though no one recognizes them; in each episode, they “investigate” a murder with Terry — and, in the final scene, confront three suspects (“The Accusation”) with that week’s guest star dramatically revealing who he/she thinks is the killer in a reality-show kind of way (underscored by the “serious” music used in reality shows for the “big reveal”).

It works, for the most part, and any “this is going nowhere” moments are kept to a minimum. It helps that Arnett is very funny as Terry Seattle, who drives a bright orange ’82 Dodge Rampage, has a strange obsession with Tommy Tune (“kind of without equal,” he says) and is the proud owner of a Maxim magazine collection … and a “Take Me Drunk I’m Home” T-shirt (which he’s left with his estranged wife).

In the opening episode, Conan O’Brien is brought on board as Terry’s sidekick to investigate the death of a magician’s assistant who was sawed in half, really sawed in half, onstage before a group of kids at the City Library. She was, Terry solemnly states, “murdered against her will.” Terry and O’Brien visit a local restaurant, where, in a fun scene, O’Brien tries to interview a potential suspect while gagging down a sandwich slathered with extremely hot jalapeno sauce. Every now and then, O’Brien almost breaks character, particularly when he and Terry interrogate sleight-of-hand magician Magic Melvin. “That is sorcery!” Terry shouts, recoiling in awe, as if he’s never seen anything like this before.

Annie Murphy plays herself in “Murderville” as Terry Seattle (Will Arnett) looks on.COURTESY OF NETFLIX

Several episodes later, it’s Annie Murphy’s turn as Terry’s Detective-In-Training when they investigate the murder of the city’s chief health inspector. He’s found face-down in a bowl of soup — “Waiter, there’s a guy in my soup,” Terry jokes at the crime scene. Terry persuades Murphy to go undercover to question a local mob boss (she dons a dark wig, dark shades and black mustache) and, like O’Brien, seems, at times, to be thrown off a bit by the improv nature of the enterprise. It’s all in good fun, it lends an air of whimsy to the proceedings and Terry Seattle can use all the help, scripted or unscripted, that he can get.

Rihanna’s zodiac sign reveals secrets to life with A$AP Rocky
Tamar Braxton Has A Message For Some Men In The Streets: ‘You Are Not A Player!’
Comment