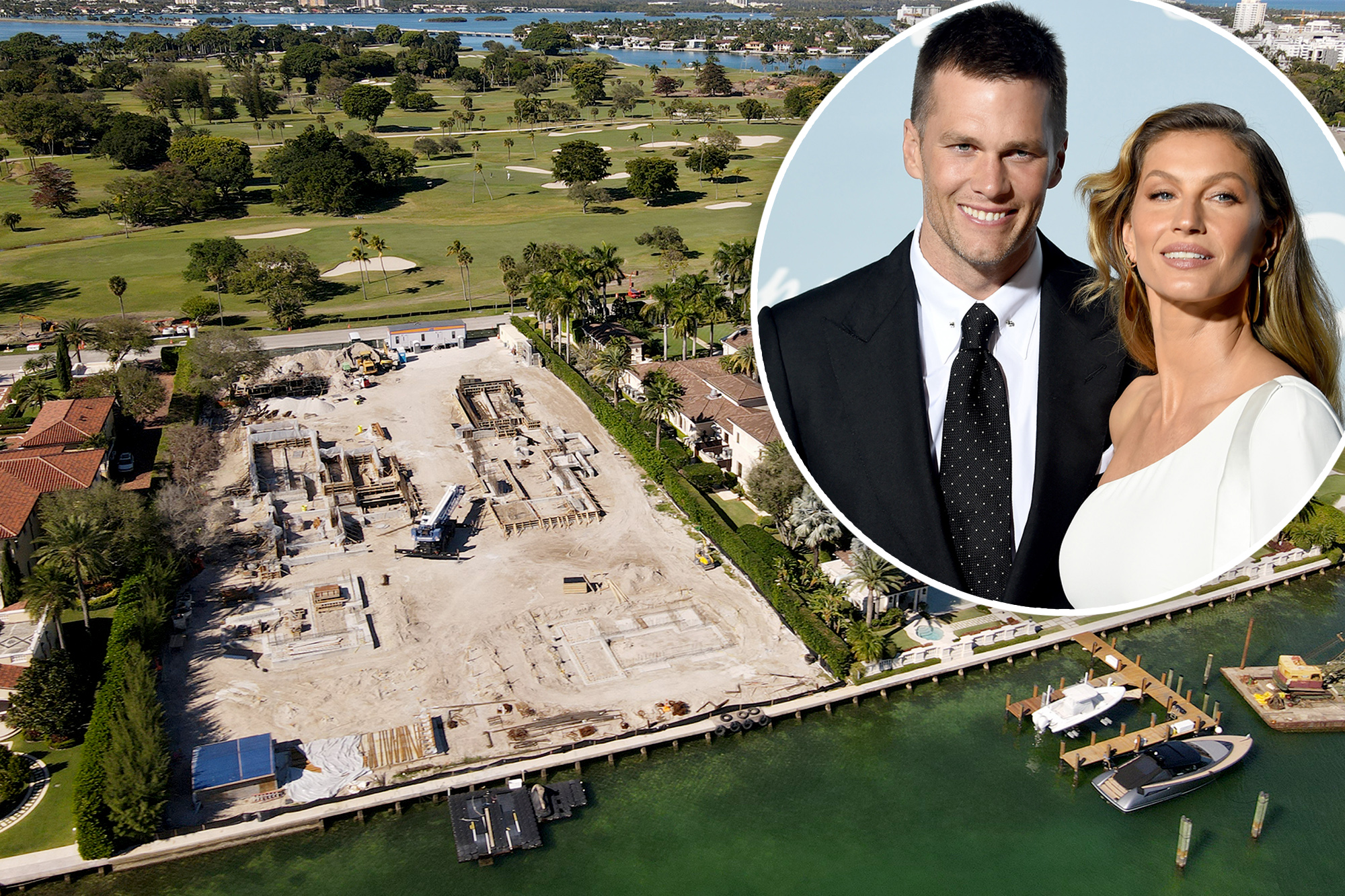 It’s the end of an era for Tom Brady, who made the stunning confirmation of his retirement on Tuesday after 22 years as the NFL’s leading quarterback.

And now many fans are wondering where he goes from here. Well, one thing has been settled: Despite some diehard fans’ Reddit and Twitter wishes — it’s not back to Boston.

Brady, 44, and his wife — supermodel and activist Gisele Bündchen, 41 — demolished the initial structure on the property, a five-bedroom, five-bathroom home spanning over 5,700 square feet.

They were spotted at the home last May, likely discussing plans of their massive renovation project.

Aerial shots show the aftermath of the teardown with the new home under construction.

Tom Brady and Gisele Bündchen have already began construction on their custom-designed Miami property they purchased for $17 million in 2020. SplashNews.com & Getty Images

Sources told Page Six that the power couple is building an environmentally friendly mansion with a particular focus on the design, all the way down to the doorknobs. And they are allegedly hoping to emulate their longtime Massachusetts home.

Brady and Bündchen also had designed their New England home, which they sold in February 2021 for a whopping $32.5 million.

“They like to build from the ground up,” a source told Page Six in December 2020. “Look at their Brookline home, this will be like that.”

The construction appears to show several different structures that are set to be built on the plot of land. SplashNews.com

Four separate structures appear to be taking shape – likely to include a main house, pool house and guest quarters. SplashNews.com

On one side of the lot is the crystal blue Biscayne Bay with views of the neon-lit South Beach skyline; on the other side is an expansive golf course for when the athlete wants to hit some balls.

Brady was previously spotted sailing to the property on a 40-foot yacht.

The lot — on the southwest corner of the island — is next door to his pal, financier Jeffrey Soffer. Other neighbors include Jared Kushner and Ivanka Trump, who also invested in a plot of land on the island around the same time.

The residence overlooks a golf course and is surrounded by 24-hour security. SplashNews.com

The island is ultra-private and is only accessible via a bridge that’s manned by a guard with 24-hour security by land, air and sea.

Made up of 300 acres, the island is occupied by just 34 estates, each with an average value of $20 million.

Their move to buy the Miami property comes a month before they sold their New York City Tribeca apartment for a whopping $36.8 million.

The plot of land they purchased spans nearly two acres. Here is an image of the home before it was torn down. Via Realtor.com

Meanwhile, sources also told Page Six, the duo are looking to invest in property on the West Coast as well.

“I was a native Californian for a long time in my life and went away from it for about 25 years. You won’t catch me dead living in the Northeast anymore … I’m loving the warm weather, and it’s been a great feeling,” the three-time MVP winner said.

Following Brady’s retirement announcement, many noticed he left out any mention of the New England Patriots, with whom he spent 20 of his career years playing. Instead, he paid homage to his final team, the Tampa Bay Buccaneers.

But Brady did respond to a tweet by the Patriots account, which included a statement from owner Robert Kraft reacting to the retirement news.

“Thank You Patriots Nation,” Brady wrote with a red heart emoji. “I’m beyond grateful. Love you all.”

Rumors have circled that Brady’s apparent issue with the team stems more from his last interactions with Patriots coach Bill Belichick upon his departure from the team.

According to a book by ESPN’s Seth Wickersham, Belichick reportedly wouldn’t meet face-to-face with Brady for a proper goodbye when the quarterback departed New England for Tampa Bay.

Kenya Moore’s Heart Is Breaking
Margaret was ‘relentless’ in Teresa feud on ‘RHONJ’
We use cookies on our website to give you the most relevant experience by remembering your preferences and repeat visits. By clicking “Accept All”, you consent to the use of ALL the cookies. However, you may visit "Cookie Settings" to provide a controlled consent.
Cookie SettingsAccept All
Manage consent