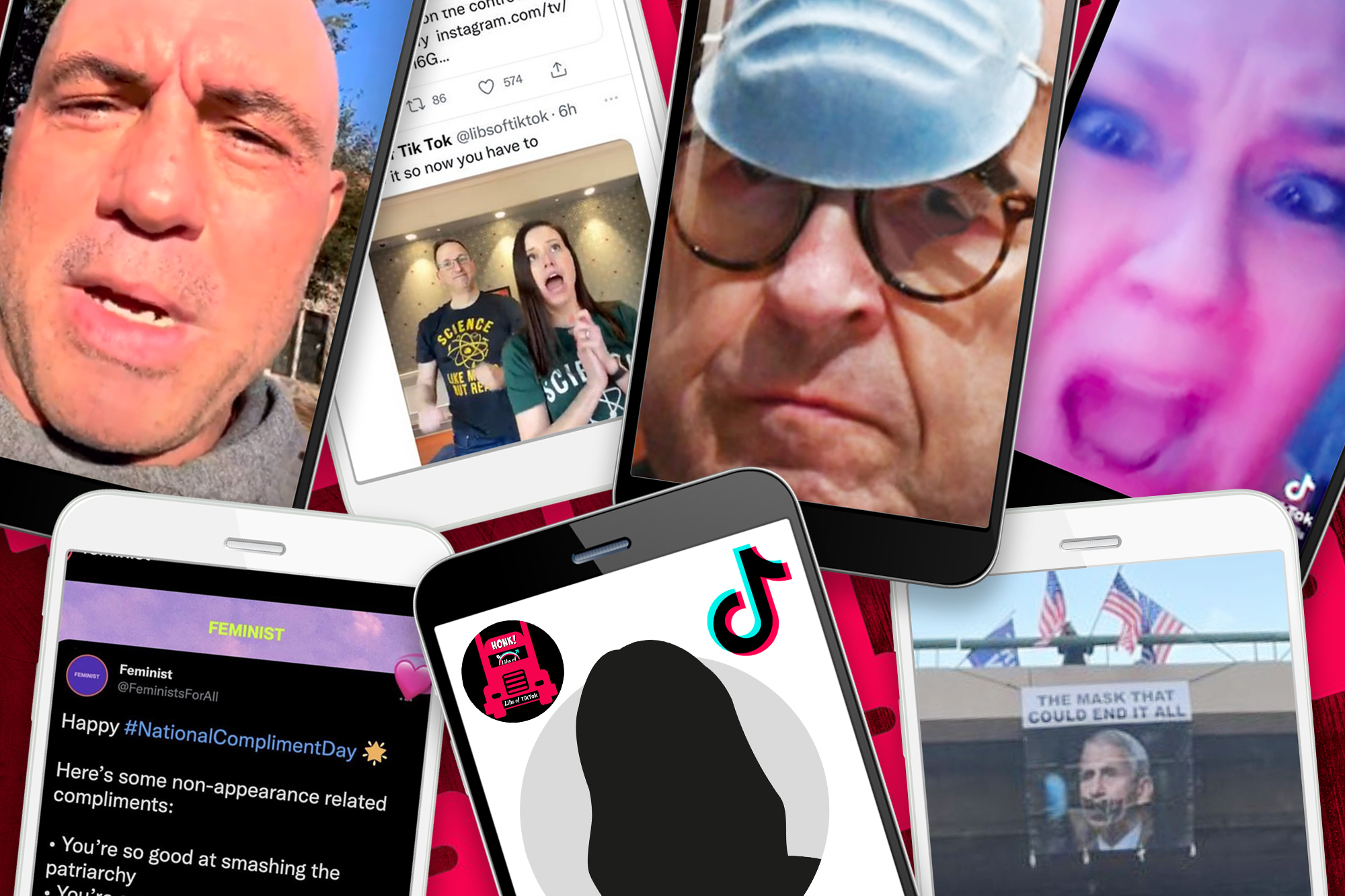 If you’ve been pondering the idea of the world coming to an end lately, it might be because you’ve been spending too much time with the “Libs of TikTok.”

The no-longer-underground social media sensation — which amassed more than a half-million followers and tens of millions of views on Twitter, Instagram and YouTube in less than a year — prides itself on exposing far left hypocrisy and liberal “wokeness” on steroids. The account’s mysterious creator specializes in outing unchecked teachers, abuses in schools and the alleged “indoctrination” of children by reposting videos of the so-called offenders in their own words.

With biting zingers and snappy captions, the feed posts alarming videos pulled directly from the “unhinged” sources: TikTok accounts of, say, a college professor accused of soft-pedaling pedophilia — or a middle school teacher gleefully threatening to “throw a child at you.” Maybe even an English teacher steering students to pledge their allegiance to a gay pride banner after secretly stowing the American flag.

Those are just a few of the greatest viral hits, mixed in with a hefty dose of button-pushing hot takes on non-binary gender fluidity and its impact on US youths.

The feed’s founder — who chooses to remain anonymous — spoke with The Post about the meteoric rise of the feed she formally launched in April 2020 which has high-profile fans in controversial podcaster Joe Rogan, 54, and former “The View” co-host Meghan McCain, 37, who often retweets her. While her location reads “Depths of Hell” online, the founder said she’s in a slightly cooler California location, where she quit her former nonpolitical 9-to-5 job to run the feed full time.

‘I’ve been called a Nazi, white supremacist, grifter, liar. I’m not offended — I think these people are so broken … I can’t see any of the people I’ve posted about coming to my home. I don’t think they’re violent.’ The mysterious founder of Libs of TikTok on “not losing any sleep” over her controversial content

It’s a “grassroots” one-person operation — yes, it once lived on TikTok but that account is now deactivated — that involves scouring every corner of the web for up to eight hours a day and sifting through tips and submissions.

“I don’t do this for money or fame. I’m not some politician or blue-check journalist. And people feel like they have someone they can talk to when they have no one else to ask to help them spread it,” she said, noting that she relies heavily on the dozens of direct messages in her inbox each day from parents and ordinary citizens who want their story to have a platform.

“With me, they have a place to reach out to to get the message out,” she told The Post. “I feel like there are so many small stories that are so important that aren’t getting out — and that’s what I’m here for. It sometimes feels like a mini Project Veritas.”

The anonymous Libs of TikTok founder told The Post she’s well-aware that not everyone is a fan of her viral video account: “If you are a conservative, chances are you will be called a racist or Nazi in your life,” noting how cheapened she believes these words have become in the culture wars. “It’s overused.”NY Post composite/Libs of TikTok/Twitter

Although plenty of proud conservatives hang on her every tweet, she told The Post there are also secret liberals, albeit ones too scared to be publicly associated with her, who follow the feed. “I think a lot of people in the middle follow me, and probably a lot of liberals and democrats,” she said.

Meanwhile, Libs of TikTok viewers likely don’t know whether to laugh or cry at the often disturbing content, but the cherry on top is her withering, pithy commentary: “The captions are the hardest part of the whole thing — I try to encapsulate the whole video together with the message . . . in two lines, max.”

And she’s not losing sleep over retribution from a teed-off subject. “I can’t see any of the people I’ve posted about coming to my home,” she said. “I don’t think they’re violent.”

Still, unsurprisingly, she’s on the receiving end of some pretty ugly epithets. “I’ve been called a ‘Nazi,’ ‘white supremacist,’ ‘grifter,’ ‘liar,’ ” she said of the parade of messages and DMs that she ignores wholesale. “I’m not offended — I think these people are so broken. The people on the left who all day call people Nazis and white supremacists are so broken. All the left-wing media are brainwashing people.”

She said there’s an inevitable moment anyone on the wrong side of the hard left will face: “If you are a conservative, chances are you will be called a racist or Nazi in your life,” noting how cheapened she believes these words have become in the culture wars. “It’s overused.”

Teacher at West Hollow Middle School in NY went on unhinged rant today on his IG about masks and says if you mask shame him at school he will throw a child at you pic.twitter.com/YuwNfnYp4c— Libs of Tik Tok (@libsoftiktok) January 25, 2022

Waking people up about what’s going on in schools and exposing “lefty lunacy” has been overwhelming. “People have said, ‘Your videos opened my eyes to what’s going on’ or ‘Your videos have convinced me to run for school board,’ ” she said, adding that she may have even converted some former lefties. “I think I’ve gotten a few [messages] that said, ‘I used to be on the left.’ ” Her focus on the “grooming and indoctrination” in schools has been her main thrust on the feed. “The left has taken over all the schools and universities — and turned out all these people now who are so confused about their identity, and they’re teachers now. We need to stop this cycle,” she said.

But what’s most gratifying is the action taken after exposing what she considers to be educators gone too far. The attention to issues featured on Libs of TikTok has brought down multiple teachers who posted dubious videos — but she doesn’t take lightly seeing someone’s life go up in smoke. “It’s not easy. I really do feel bad,” she told The Post, noting that their poor judgment and self-incriminating content brought about their downfall in the first place. “Sometimes it breaks my heart, but it has to be done. These kids are so innocent and they don’t deserve to go to school to get groomed and indoctrinated.”

It’s surprisingly easy to find countless teachers, lacking basic self-awareness, publicly and cavalierly posting inappropriate content on TikTok. “They’re usually smug about it, bragging about it and think there won’t be repercussions,” she claimed, adding, “They were doing this as a government employee. Technically, it’s taxpayer money.”

Reps for TikTok did not immediately respond to The Post’s request for comment regarding her opinions about inflammatory content.

While she said she’s always conscious of not running afoul of the ubiquitous Twitter police, the founder added that the constant censorship and suspensions only hurt the platform’s credibility. “I obviously don’t agree with the policing and silencing, but I do think Twitter is an amazing platform.” However, she tries to stay away from vaccine discourse for that reason. “I know the work I’m doing is really important, and I don’t want to risk getting suspended … for vaccine-related videos.”

With future plans to monetize her work, the founder said she has no plans to hang up her laptop: “I would never stop this because it’s too important.”