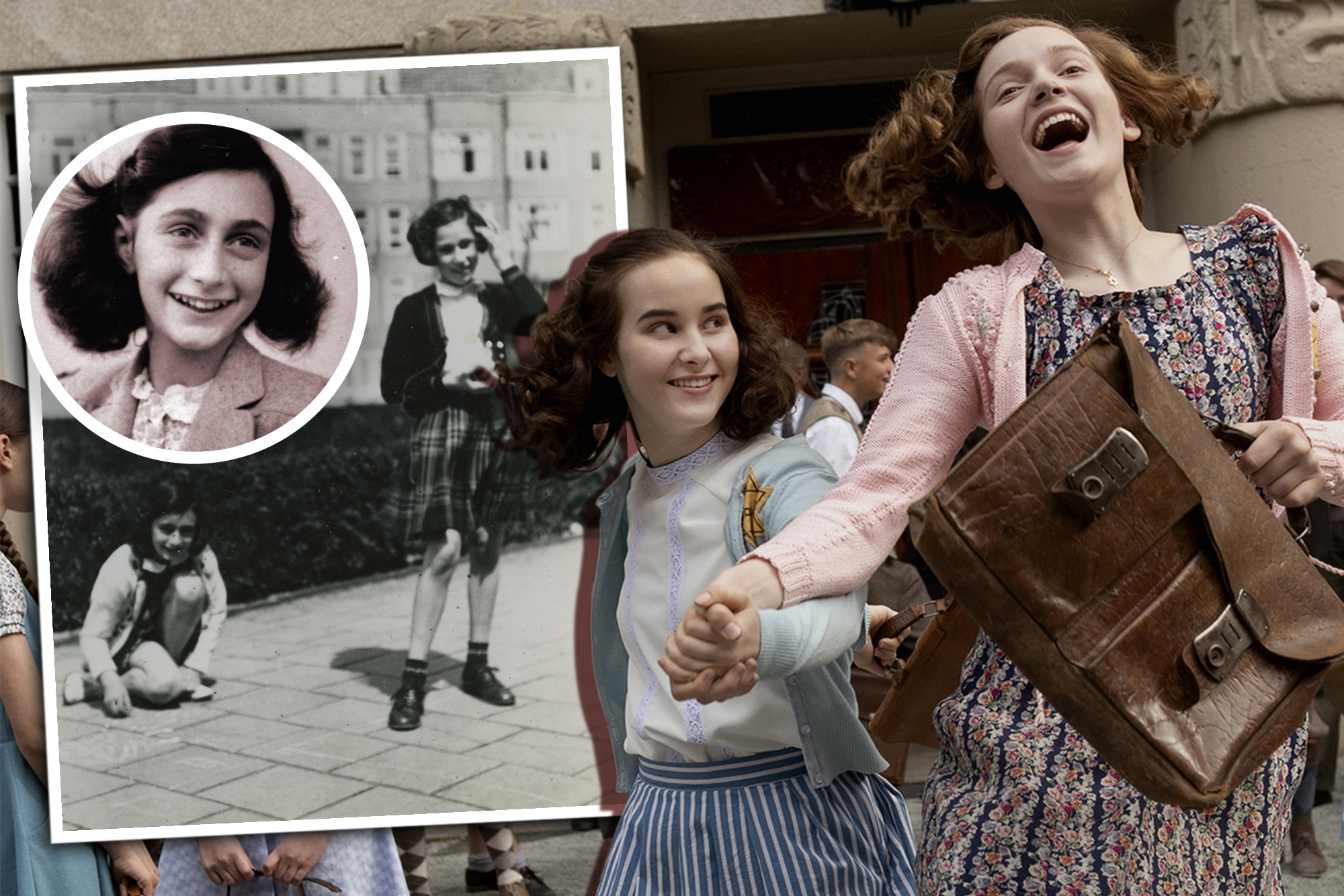 In 1934, when she was still in kindergarten, Anne Frank made an instant friend in fellow German Jewish refugee Hanneli (Hannah) Pick-Goslar.

Long before Frank became a worldwide symbol of the Holocaust’s tragic losses with “The Diary of a Young Girl,” written while she and her family spent two years hiding in an attic, she was a normal kid, readjusting to life in her adopted city of Amsterdam. Pick-Goslar was her neighbor and best friend at the local Montessori School, and the two girls played hopscotch, gossiped about boys and set up a ping-pong club called “The Little Dipper” — all in the midst of Nazi occupation and an increasingly hostile Europe.

Their beautiful and complex friendship is the subject of the new film “My Best Friend Anne Frank” (streaming on Netflix Feb. 1), based on the 1997 book “Memories of Anne Frank: Reflections of a Childhood Friend,“ by Alison Leslie Gold.

While Frank did not survive World War II, Pick-Goslar did, and the now 93-year-old, who lives in Jerusalem, still cherishes the memory of her childhood playmate.

In an interview with Scholastic in the late 1990s, Pick-Goslar shared that her friend was always an avid writer — constantly scribbling in her journal — who could also command a room. “Everybody would ask her ‘What are you writing?’ and the answer always was ‘It’s none of your business,’ ” Pick-Goslar said in the interview.

Anne Frank, left, along with best friend, Hanneli Pick-Goslar, in Amsterdam, May 1941, a year before the Frank family went into hiding for two years. Getty Images

In the film, Pick-Goslar is played hauntingly by Josephine Arendsen. She and Frank (Aiko Beemsterboer) love star-gazing, and in one scene, Hannah points to a constellation and tells her little sister: “That saucepan over there has seven stars. One of those is me and the biggest one is Anna.”

Later, the starry-eyed Frank confides to her friend about her life’s ambitions: wanting to see “the whole wide world” and become an actress or writer — “a very famous one.”

In real life, the close confidantes were suddenly torn apart in July 1942.

Pick-Goslar, who thought the Franks safely escaped to Switzerland, didn’t know the family’s true whereabouts: they were still nearby in Amsterdam, cramped in the attic of a house eventually called the “Secret Annex.” There, Frank penned what would become the world’s most famous diary, eventually published by her father, Otto, the sole survivor from the group. It’s since sold 30 million copies and been translated into more than 70 languages. In it, the anguished teen pined for her friend, “Last night, just as I was falling asleep, Hanneli suddenly appeared before me. I saw her there, dressed in rags, her face thin and worn,” she wrote Nov. 27, 1943.

The best friends and neighbors go through adolescence with the backdrop of Nazi occupation in the new film “My Best Friend Anne Frank,” which pivots between happier days and despair in the concentration camp.Courtesy of Netflix

Less than a year later, in August 1944, the Franks were discovered and later put on a transport to Auschwitz. Eventually Anne and her older sister, Margot, were sent to the Bergen-Belsen concentration camp.

With the SS hunting Jews door to door throughout Holland, Pick-Goslar was arrested in June 1943 and sent to a transit camp, then also transferred to Bergen-Belsen.

When she found out that a desperately frail Frank was on the other side of the heavily guarded barbed wire fence in a different section of the camp, Pick-Goslar risked both their lives to help her friend during the bitter cold in the winter of 1945.

“I was waiting — and I suddenly heard somebody calling me,” Pick-Goslar recalled of finding Frank in the 1994 documentary “Anne Frank Remembered.” “It was Anne. We cried. Then she said she had nobody anymore.”

Knowing she would be killed if she were caught, Pick-Goslar assembled a modest care package for Anne, including a sock, dried prunes and some bread donated from fellow inmates. In the middle of the night, the two teens met on either side of the barrier. Pick-Goslar threw the package — only for it to get intercepted by another prisoner, who stole it and fled.

Pick-Goslar tried again soon after. “This time she caught the package and it was the last time I saw her,” she later said. In February 1945, just weeks before British soldiers liberated Bergen-Belsen, 15-year-old Anne, thought to be infected with typhus, died.

“I thought we’d be liberated and be together. One day before you are liberated, you don’t know it’s going to be tomorrow. You hope and you don’t know which will happen quicker — that the English will save us or that we will die,” Pick-Goslar told Scholastic.

The film’s screenwriter Paul Ruven told The Post that Pick-Goslar’s tale unlocked a new angle on the Anne Frank story. “We were immediately moved by Hannah’s story,” he said of himself and co-writer Marian Batavier. “What amazed us the most during our research is the strength and courage of these young girls in wartime, especially Hannah’s effort to save her best friend from death.”

After being liberated at 16, Pick-Goslar went on to become a nurse in Palestine, marrying a doctor, Walter Pinchas Pick. They had three children and eventually 11 grandchildren and 20 great-grandchildren. The film’s end credits note that this was her “revenge on Hitler.”

Hanneli Pick-Goslar, now 93, is a great-grandmother living in Jerusalem.ANP/AFP via Getty Images

She still mourns the fate of her dear friend.

“People should know about the cruelty — it was unnecessary,” she told Scholastic. “It’s important to understand what happened so it doesn’t happen again … I always say that the only thing Anne Frank did was that she was born Jewish, and for that she had to die. She could’ve given a lot to mankind.”