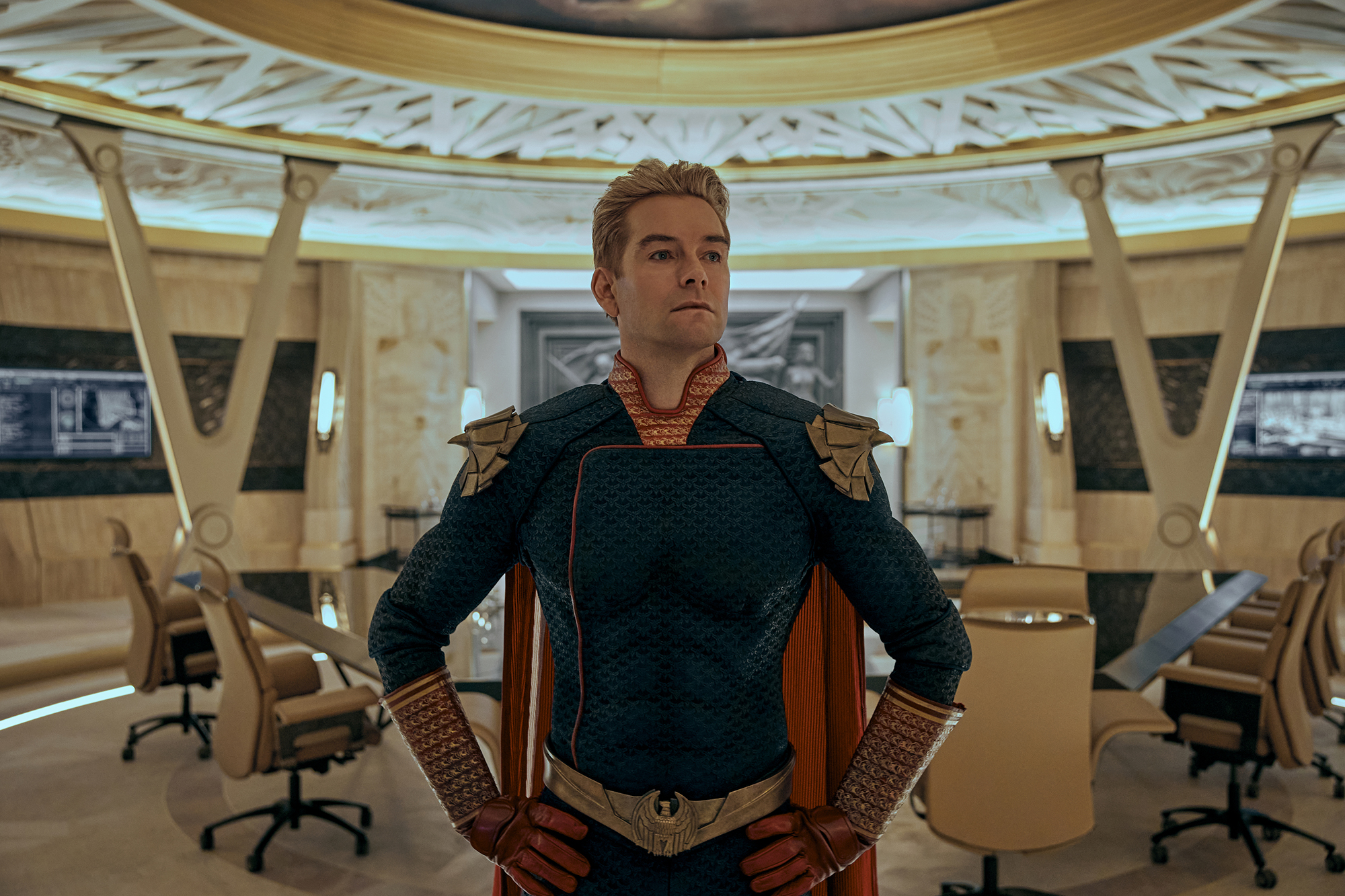 Strap yourself in for a wild ride: “The Boys” returns for a third season of head-popping gore, dark humor and psychotic superheroes — and it’s a rollicking ride.

Nearly two years have passed since Season 2 of “The Boys” dropped on Prime Video and ended with Nazi superhero Stormfront (Aya Cash) fried to a cinder and narcissistic, murderous Homelander (Antony Starr) — leader of The Seven — spiraling further into his unbridled madness.

There’s a quick catch-up tutorial in the opening episode of Season 3 and, once that’s dispensed with, it’s right back into the fire with our “Supes” and the mere mortals plotting their downfall — starting with a clip from “Dawn of The Seven,” Vaught’s big-budget movie rewriting Homelander’s history with Stormfront (portrayed by Charlize Theron in a meta twist) in an effort to boost his sagging public ratings.

He’s also on an apology talk show in which he goes full-on-smarm, but he’s further thrown for a loop once Starlight (Erin Moriarty) is named co-captain of The Seven. It’s a “touché” moment, not just for Starlight but for evil Vought boss Stan Edgar (Giancarlo Esposito), who’s tired of Homelander and the whole shebang.

It’s now a year later, and Hughie (Jack Quaid), who’s still in a relationship with Starlight, is wearing a suit and heading the Federal Bureau of Superhuman Affairs alongside Congresswoman Victoria Neuman (Claudia Doumit) — who’s not who or what she appears to be.

The take-no-prisoners Butcher (Karl Urban) remains unrelenting in his quest for justice and the rest of the team is scattered to the wind: Mother’s Milk (Laz Alonso) is trying to adjust to life as a single dad (his ex-wife, Monique, dates the nebbishy “Dawn of The Seven” director) but he can’t shake his visceral obsession with hunting Supes. Frenchie (Tomer Kapon) and Kimiko (Karen Fukuhara) are still together and communicating via sign language, but otherwise hanging around waiting for something to happen.

Starlight (Erin Moriarty) is hosting a reality show to find the next member of The Seven.Courtesy of Prime Video

They don’t have to wait for long.

I could go on, but that would ruin many of the surprises in store for fans of “The Boys.” Jensen Ackles joins the cast as Soldier Boy — thought to have been killed in a nuclear-reactor meltdown in the ’80s — but that’s only the tip of the surrealistic iceberg. Trust me.

The series hews closely to its mission of outrageous entertainment via tongue-in-cheek pop-culture references and allusions: Vaught’s Lifetime-y VTV network has the tagline “Television for Women,” there are shout-outs to Dame Judi Dench (!) and the cast of “Riverdale” and Starlight hosts a reality TV competition series, “American Hero,” to choose the next member of The Seven.

It’s that weird and spot-on, with some of the sharpest writing on television that leaves virtually no strange stone unturned. It’s riveting, with the show’s stock-in-trade cartoonish violence that’s more humorous than disturbing.

Fans of “The Boys” will get it; if you’re watching for the first time, you will soon understand what all the fuss is about.

The Flash is Coming And It Does Not Look Like He Will Disappoint
Gabrielle Union Is Praising Pinky Cole In An IG Post
We use cookies on our website to give you the most relevant experience by remembering your preferences and repeat visits. By clicking “Accept All”, you consent to the use of ALL the cookies. However, you may visit "Cookie Settings" to provide a controlled consent.
Cookie SettingsAccept All
Manage consent