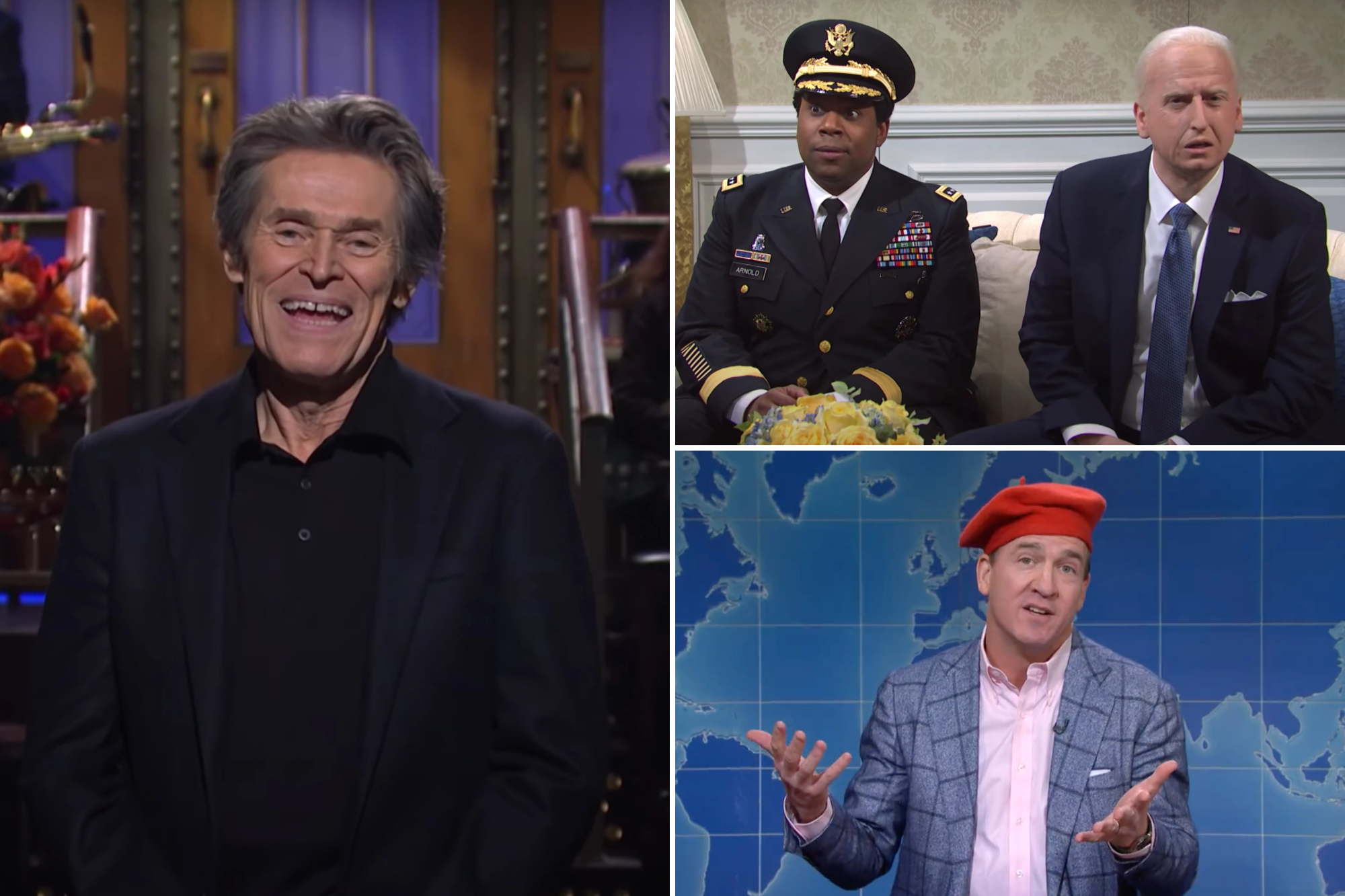 “If Germany doesn’t want to go to war you know it’s bad,” Johnson said as officials told him which allies would not support the US in a potential military intervention.

Cabinet members then told the fake president that Russia was deploying another disinformation campaign to put a positive public relations spin on its aggression, and had enlisted anti-vaxxer Aaron Rodgers to star in propaganda commercials.

“Mr President I think your generation could learn a lot from mine,” the teenage social media pro (Chloe Fineman) said. “Like we don’t believe in drone strikes we believe in breaking down our enemies psychologically. That’s why I’m gonna DM Putin and say ‘oh my God, I loved your outfit the other day. Was that Old Navy?’”

Fresh off his appearance as the Green Goblin in “Spider-Man: No Way Home,” Dafoe made light about his famously intense film roles.

“One man’s over the top is another man’s engaged performance,” the 66-year-old joked.

As Dafoe thanked the live audience for venturing out to 30 Rock in the snow, the Wisconsin native was interrupted by Mikey Day and Aidy Bryant, who played stereotypical Midwesterners from his hometown that struggled to recall any of his non-superhero roles.

A skit spoofing a tenants meeting at a Manhattan apartment building featured an amusing roster of eccentric New York characters. A grumpy woman on a fixed income, a ladies’ man whose exploits were hard to ignore, and a young transplant who pays $6,000 a month spoke to the board members.

All of the building’s residents were under the false impression that the doorman, played by Chris Redd, was named Jamarkus.

“My real name is Robert. I let it slide at first but I’d like to nip it in the bud,” Redd complained.

Dafoe played an aging bohemian that lamented the city had lost its edge.

“I bought the top three floors of this building in 1971 for $11 and I’ve been a pain in the ass ever since,” Dafoe said.

“You’d go to CBGBs and Iggy Pop would puke in your face. We loved it.”

A satirical music video saw Redd and Keenan Thompson depicting insomniac R&B singers who were too distracted by their phones, TVs and previous embarrassments to sleep.

Dafoe and Aidy Bryant hosted a “Badminster Dog Show,” where non-pedigree dogs were rated for their deformities, anti-social behavior and bad fashion sense.

In a fake commercial, aging sports legends Frank Thomas and Doug Flutie, (played by Thompson and Alex Moffat) and Dafoe (playing himself) dropped in on Day to give him unsolicited advise on a male impotence treatment with unappealing side effects.

“Weekend Update” featured a guest appearance by retired quarterback Peyton Manning, who was booked to provide commentary on last Saturday’s thrilling NFL playoff games. However, Manning admitted he wasn’t watching because he was hooked on “Emily in Paris” and its “fresh take on feminism … finally!”

“If it were me I probably would retire too if it gave me more time to watch ‘Emily in Paris,’” the Super Bowl champ joked.

“President Biden promised to nominate a black woman to the Supreme Court, but I hope it’s not because he wants to sniff a new type of hair,” Michael Che cracked.

In a send-up of “Beauty and the Beast,” Dafoe played Belle’s father Maurice, who was more interested in spending quality time with himself than looking for his daughter.

A digital short saw the “SNL” writers room infiltrated by a 10-year-old boy who was more fun and relevant than most of the staff.

The veteran actor also anchored a bizarre skit at the end of the show where he played an office temp worker on a path of destruction.

Katy Perry performed her songs “When I’m Gone” and “Never Really Over” on a set designed to look like an underground portal in “Super Mario Brothers.”

The show is slated to return live to the airwaves on Feb. 26, when former writer John Mulaney will join the “Five-Timers Club” of people who’ve hit the rare mark of hosting the show five times. Brooklyn’s LCD Soundsystem was set to make its second appearance as musical guest.

Kid Rock to cancel tour stops at venues with vaccine mandates
No Way Home’ swings back to top box-office spot
We use cookies on our website to give you the most relevant experience by remembering your preferences and repeat visits. By clicking “Accept All”, you consent to the use of ALL the cookies. However, you may visit "Cookie Settings" to provide a controlled consent.
Cookie SettingsAccept All
Manage consent