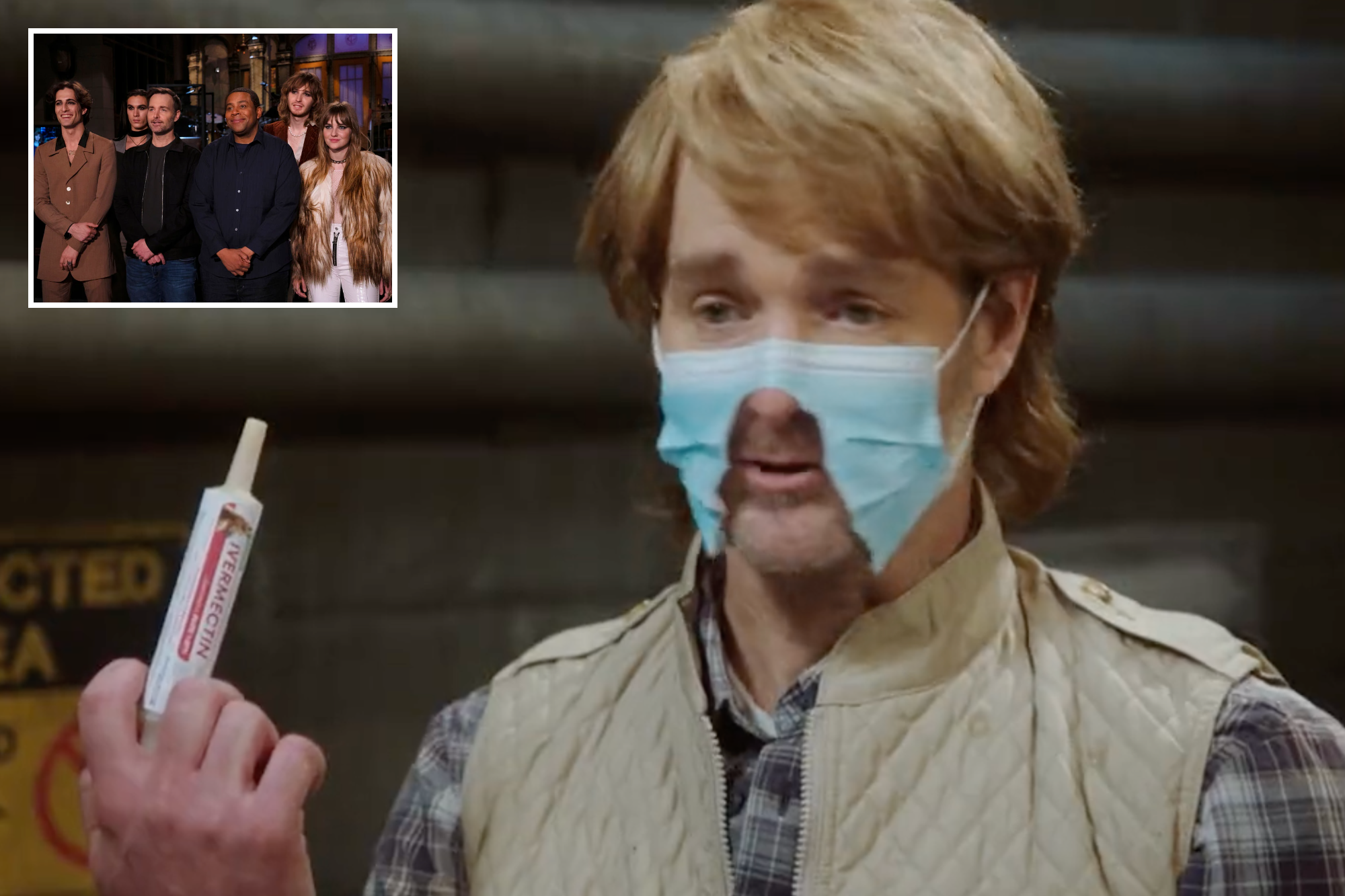 “The Ingraham Angle,” sponsored by a Paula Dean hummus substitute and a COVID-19 test that always comes up negative — even if you have it, begins with McKinnon grumbling about the first year of President Joe Biden’s term.

“Inflation’s out of control, gas is $19 a gallon and the Green M&M has been canceled just for being a whore,” she deadpanned.

She then welcomed Aidy Bryant as Cruz, who pledged to degrade himself to stay in Trump’s good graces.

“My beard is like January 6th: shocking at first, but it’s been normalized,” the fake Texas senator said.

Pete Davidson played the anti-vaccination athlete Djokovic, who was asked about his COVID-19 related expulsion from the Australian Open.

“I never thought I would hear myself use deported in a bad way, but what happened?,” the fake Ingraham asked as she drooled over the Serb’s accented answer.

“I’m a fan of your sport, because in tennis love is bad,” she deadpanned.

“It’s my greatest honor to fight for African Americans, no matter how many times they ask me to stop,” Nwodim said.

Johnson-as-Trump then delivered a free association rant that touched on booster shots, John Mayer, “How I Met Your Father,” Jason Momoa, Prada, and his ambition for another run at the White House in 2024.

From left to right –Damiano David and Ethan Torchio, host Will Forte, Kenan Thompson, Thomas Raggi, and Victoria De Angelis pose for a group photo on the set of Saturday Night Live on January 20, 2022.Rosalind O’Connor/NBC

In his monologue, Forte, 51, who left “SNL” in 2010, complained he hadn’t been asked to host sooner, unlike contemporaries Kristen Wiig, Fred Armisen, Bill Hader, Seth Myers, Adam Samberg and John Mulaney — a writer on the show who had taken center stage four times.

Executive Producer Lorne Michaels then appeared with next week’s slated guest host Willem Dafoe, saying there had been a mistake and he meant to feature the dramatic actor Saturday, but his phone’s auto correct mistakenly texted “Will.”

Several pre-taped MacGruber bits reunited Forte with Wiig and Ryan Phillipe as the MacGyver-esque character’s assistants. MacGruber was more interested in burning masks and using unsanctioned COVID-19 treatments than deactivating bombs. He also dressed as the “QAnon shaman” and confused the terms “asymptomatic” and “anti-Semitic.”

“I feel like you’ve gone down some sort of alt-right misinformation rabbit hole,” Phillipe said, as their hideout exploded.

Will Forte, reunited with Kristen Wiig and Ryan Phillipe, was more interested in burning masks and using unsanctioned COVID-19 treatments than deactivating bombs, playing his role as MacGruber.Twitter

In a Nickelodeon game show spoof, Forte played a sadistic host that reveled in insisting that Bryant (playing a little girl) dig a miniature flag from a spinning, oversized cream pie.

“The whip cream is adversity and the flag is your unfulfilled potential,” he told her.

In his monologue, Will Forte, who left “SNL” in 2010, complained he hadn’t been asked to host sooner, unlike contemporaries like Kristen Wiig and Fred Armisen.Saturday Night Live

“Remember it’s a three-way not a me-way,” the creepy character said to Gardner’s delight and Day’s dismay.

On “Weekend Update,” Davidson joined Colin Jost to poke fun at their new purchase — a decommissioned Staten Island ferry vessel that they planned to turn into a performance venue.

“Even the mayor tweeted about it which is how I found out we had a new mayor,” Davidson said. “What happened to Bloomberg?”

Sarah Sherman also drew big laughs by accusing Jost of being an elitist pervert who was out of touch with younger struggling comedians.

“The oldest person in America died at the age of 115. It’s a powerful reminder to always test your cocaine for fentanyl,” fake co-anchor Michael Che cracked.

Forte and Wiig teamed up again to play a hokey country-and-western duo whose songs kept getting more avant-garde as their infomercial continued.

Italian glam rockers Måneskin energized Studio 8H with lively performances of the Four Seasons’ tune “I’m Begging” and their hit “I Wanna Be Your Slave.”

“SNL” was slated to return to the airwaves next week with Dafoe on hosting duties and musical guest Katy Perry rounding out the season’s 12th episode.

Stephen Sondheim left behind an estate worth an estimated $75 million
Porsha Williams Supports Her BFF, Kandi Burruss In Her Latest Initiative
Comment