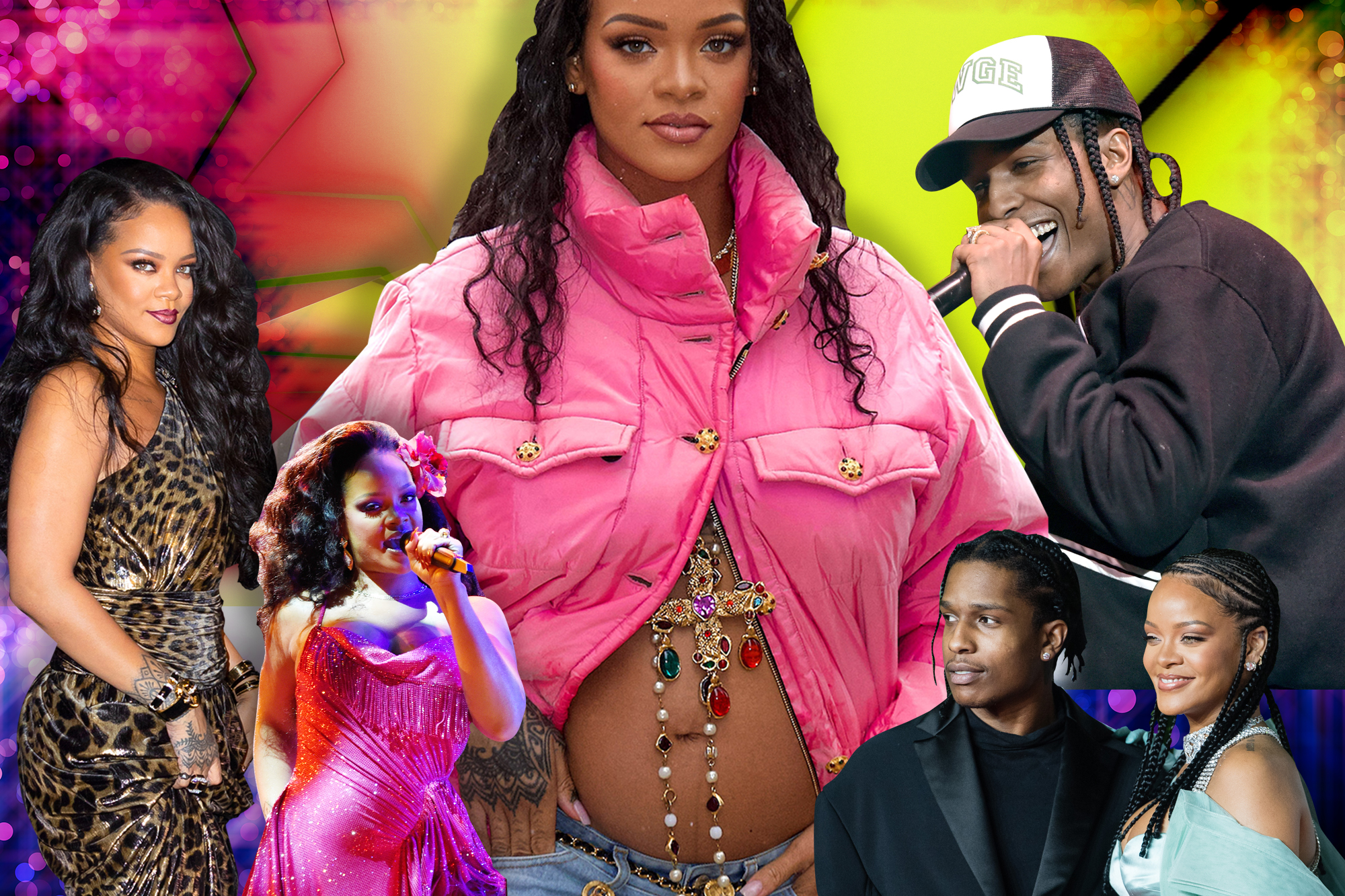 Oh, and let’s not forget: billionaire.

The enigmatic Rihanna, 33, hit the mainstream like a tidal wave and has relentlessly risen to ever-greater heights in ways that no other modern pop star has done.

To call her a living legend does not do justice to her legacy thus far — and the fact that she’s been seen lighting up a joint, baring her derrière and having a total blast while doing it gives her a polarizing allure as she asserts her claim over the world. And with the recent announcement that the “Diamonds” singer is expecting her first baby with rapper A$AP Rocky, RiRi’s legacy is only getting more noticeable — just like her belly.

There’s something infectious and mesmerizing about her — and I bet there’s something cosmic! Good thing I’m a pop culture astrologer, so pull up your fave RiRi playlist and let’s dive right in.

Rihanna’s confidence & strength of will are her greatest assets

Rihanna was born on Feb. 20, 1988. That makes her a Pisces sun with an Aries moon. Her birth time that is listed online hasn’t been verified, so let’s focus on what we actually know for a fact. (Yo, Rihanna, you’re going into one of the most important decades of your life, so holler at me.)

Rihanna’s birth chart shows that she is a powerhouse.Getty Images for BET

The predominant element within Rihanna’s chart is fire — she practically sizzles with it! Surprisingly, people with strong Pisces energy tend to be overpowered by their emotions, but — because she has tremendous resources of fire and earth — she is both able to ground herself, find an endless amount of fuel and channel her passion into any goal she desires. She’s an all-or-nothing queen with immense confidence, willpower and perseverance. Aries energy — the leader of the zodiac and the catalyst to charge forward and get whatever it desires — dominates her chart, giving her luck when she takes action and forges a path of her own creation. Yet, with big planets in Capricorn, the business head of the zodiac, she’s obviously ambitious and seeks to carve out long-term success with big money and an untouchable legacy.

Rihanna’s astrological aspects lean predominantly toward one sextile, which is a supreme angle of harmony and opportunity. However, for her, opportunities have always been like diamonds that were initially hidden but easy to find when she looked. It’s as if anything she’s ever wanted is guaranteed to be there and supplied by a supportive universe. Lucky? Yeah, a lifetime of it!

Another point to mention is that she is obviously very creative and has phenomenal talents, but these are not actually the things that have established her as iconic. It’s by her knowing how to ask for what she wants, work toward her goals and then strike fiercely with complete confidence in her success that she has been able to branch out in any way that she dreams. There are some aspects in her chart that hint that she’s a rebel, but I don’t truly believe that this epitomizes her. I don’t feel like she’s inherently someone who lashes out. Instead, I think that she’s independent and immensely courageous, rather than being an unhinged personality on steroids like some other pop stars.

Rihanna is embarking on a whole new era of her life.REUTERS

Rihanna is strategic. She’s a force to be reckoned with. She can set her mind on anything and work her magic to get it. But with so much cardinal energy in her chart, she can certainly be pioneering (if not controlling) to get it. She’s not one who wants to micromanage others — she just likes it done her way, period.

Her ascent to power has been an inherent motivation from birth, not just for the sake of power (as others crave it) but to assert her will and have the wealth and abundance associated with it. I was looking deeper into her chart, and when it comes to being a billionaire, she has some extremely lucky placements. Not only does a lot of her chart speak of understanding traditional business models, but there’s a synergy with the more modern ones that happens effortlessly for her. She can present visionary energy in her work but especially in business and around money. Jupiter, the planet of miracles and wealth, links perfectly to her Mars (her drive), her Saturn (her structures) and her Uranus (her genius). Jupiter expands everything it touches exponentially and provides luck, prosperity and gain. Her Jupiter is in Aries — meaning that when she has the vision, calls the shots and sets forth on any new endeavor, it is guaranteed to find success.

Rihanna and A$AP Rocky are super compatible.AFP via Getty Images

A$AP Rocky, Rihanna’s longtime boo, was born on Oct. 3, 1988. That makes him a Libra sun with a Cancer moon. While the couple started out as collaborators and friends, it appears that this could be a very serious connection. “Why?” you ask. Because I can see their stars, duh. While neither Rihanna nor A$AP Rocky’s birth times are listed online (but my DMs are oooopen), as soon as I pulled up their natal charts side-by-side, my head spun! My compatibility rating for them is an 8.5 out of 10.

There are just so many beautiful alignments between them that I can easily see why they have built such a solid connection. This is also a perfect example of why sun sign matches are not the most important tool to predict a couple’s compatibility — there are so many other factors to consider.

For instance, Rihanna’s Pisces sun is sensitive, imaginative and romantic, which shares a similarity with A$AP’s Libra sun, who is also charming, sensual and loving. But Rihanna’s Pisces sun is water, while A$AP’s Libra sun is air — which is not technically a connection that has the greatest ease. But, surprisingly, as I mentioned before, Rihanna’s chart is mostly fire and earth, with A$AP’s chart mostly fire and air. This means that, for the most part, they significantly energize each other — especially with most of Rihanna’s energy being in Aries, with strong energy in A$AP’s chart being in Libra. Aries and Libra are like a yin-yang, balancing one another. In fact, Rihanna’s fiery moon is exactly in unison with his sun, showing that this is a profound union — a soulmate union. (We have several soulmates in a lifetime, FYI.) Both of each other’s suns are also exactly connected to each other’s Venuses, which rule pleasure and affection, showing that, yet again, they are perfect mirrors to each other.

Last to mention is that A$AP’s Venus is in an exact link with Rihanna’s Mars and Jupiter, showing that there’s expansive passion, sex and euphoria that they bring to one another’s lives. Oh, and if anyone wants to know who is the dom top most of the time in the relationship, it’s def Rihanna! Ha!

Where are predictions for Rihanna’s future?

Rihanna is entering one of the most important periods in her entire lifetime for many different reasons.

First off, Jupiter, her solar co-ruler, will dance throughout her Pisces zodiac sign throughout much of 2022, bringing her a gorgeous period of extra luck (lol, like she needs it?!) and new beginnings. But because so much of her chart is also in Aries, 2023 will be epic for her, too. New product launches? New real estate? New business initiatives? All guaranteed.

But let’s talk about some more shocking predictions, shall we? How about this . . . drum roll, please . . .

Will Rihanna get engaged or married?

Yes. I think that engagement could be tossed around in 2022 (most likely), with 2023, 2024 and 2025 bringing some major growth around these subjects. This could lead to a prolonged engagement, but also some friction as her life changes and settling-down decisions are considered.

Will Rihanna have a child?

Uh, yes. In fact, she was destined to. The news broke, but I always knew she was fated to be pregnant and have a child in 2022 with Jupiter moving through Pisces and Aries — as this is often a very significant time of happiness, birth, pregnancy and joy.

Absolutely. 100%. That is going to happen. I think we will get teases of this in 2022, but I think it will be singles dropped and then a greater release in the years beyond that. Get ready for R9. You heard it here first.

Saturn, the planet of life lessons, will enter Pisces in 2023 and will be making some intense movement over many of her planets from then until nearly 2028. This will help her to re-establish her empire but could bring some tougher decisions that she must face. This means more responsibility will also be added to her plate.

Oftentimes, someone has to focus on creating an entirely new flow, whether that’s truly stepping into a long-term relationship, becoming a parent or juggling more than ever before. But will she survive and thrive? Hell yes. She’s Rihanna.

Kyle Thomas is a globally recognized pop culture astrologer who has been featured in ”Access Hollywood,” E! Entertainment, NBC & ABC television, Cosmopolitan magazine, Hulu, Bustle, Elite Daily, Marie Claire and more. He is known for his cosmic guidance for celebrities, business executives and prominent influencers. His work harnesses the power of the stars in regards to entertainment lifestyle and trends affecting people worldwide. For more information, visit KyleThomasAstrology.com.