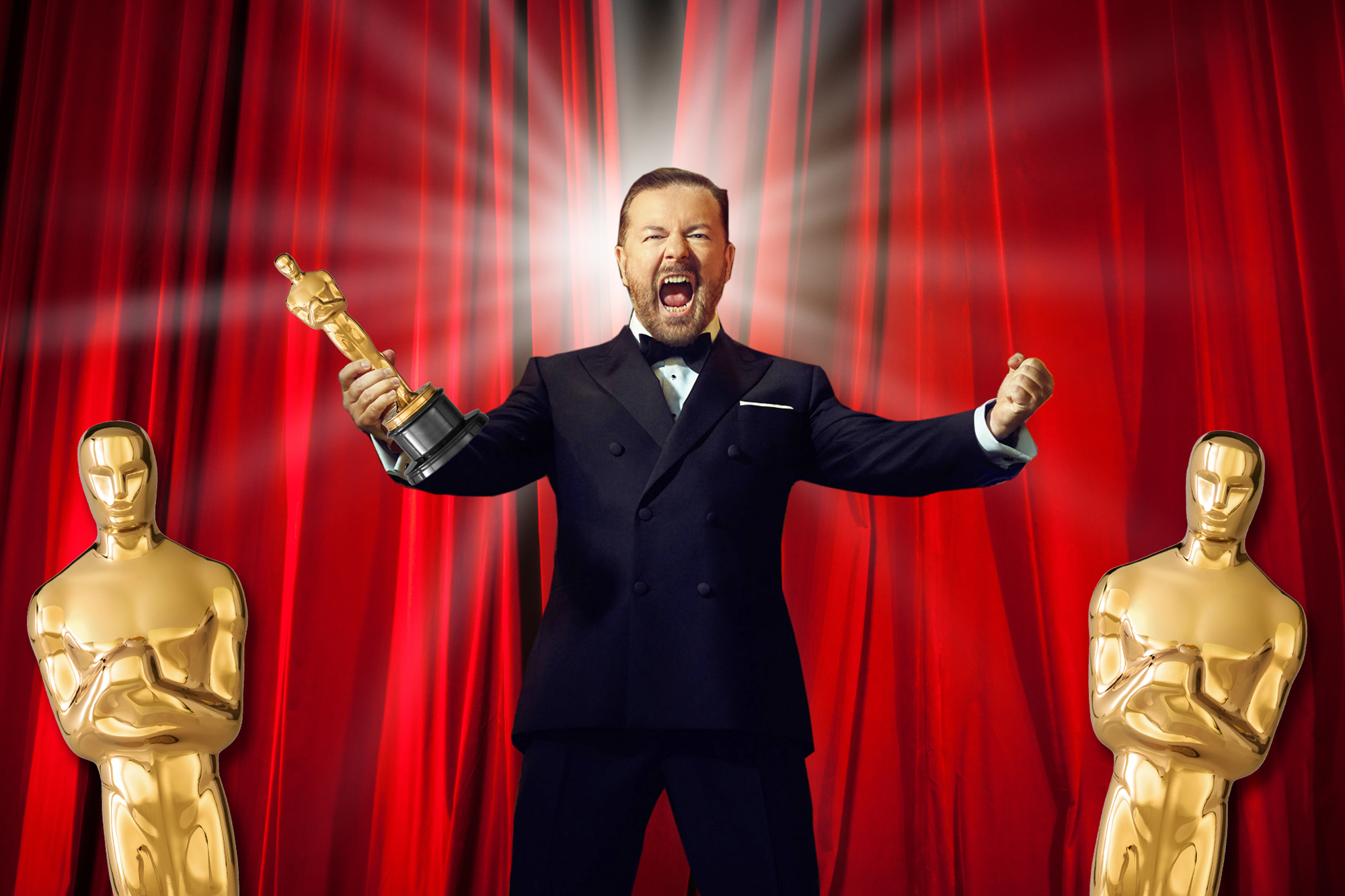 If Hollywood wants to save the Oscars, they need the one man they’d never, ever want to host.

Ricky Gervais, like Obi-Wan Kenobi before him, is their only hope.

In case they missed it, last week Gervais offered to host the Oscars for free.

The Academy will never take him up on it. They absolutely should.

Consider that the Golden Globes — which Gervais has hosted five times, generating buzz and ratings and headlines and faux-outrage for days — wasn’t televised this year, and no one even noticed.

Three years into this pandemic, we’ve all become quite happy streaming high-quality content from the comfort of our homes, at a fraction of the price.

The screens have gotten smaller — and, apologies to Norma Desmond, so have the stars.

It’s a permanent shift, one Gervais addressed at the 2020 Globes, talking “to all you perverts” in the room.

“No one cares about movies anymore,” he said. “Most films are awful. All the best actors have jumped to Netflix and HBO and the actors who just do Hollywood movies now do fantasy-adventure nonsense. They wear masks and capes and really tight costumes. Their job isn’t acting anymore. It’s going to the gym twice a day and taking steroids. Have we got an award for Most Ripped Junkie? No.”

He was right then and even more so now. Can you name any of the movies likely to be nominated for Best Picture this year? Let alone who’s starred in them?

The Academy has reportedly reached out to. ‘Spiderman’s’ Tom Holland and Zendaya to host the 2022 Academy Awards. CHRIS PIZZELLO/POOL/AFP via Getty Images

Yet the Academy, in all its willful ignorance, keeps trying the same thing over and over, even as they continue to lose eyeballs, ad revenue and cultural relevance.

Their big brainstorm this year is to float Zendaya and Tom Holland as hosts. This is the dumbest idea since they hired James Franco and Anne Hathaway.

Since we must state the painfully obvious: Anyone over age 25 doesn’t know or care who these two are. Anyone under age 25 is never, ever going to watch a bloated three-hour narcissistic master class in self-congratulation and hypocritical, woke virtue-signaling live on network television, no matter who hosts — because kids no longer watch television.

TikTok is their Hollywood.

Other brilliant ideas to save the Oscars, host-less since 2018: Pete Davidson, that reliable “SNL” player with mainstream appeal; The Rock, known for his lacerating humor and quick wit; “Only Murders in the Building” trio Steve Martin, Martin Short and Selena Gomez (there’s that ridiculous cross-demographic thinking again); Golden Globe vets Tina Fey and Amy Poehler, who go further than most but still toe a line only Gervais will cross.

According to sources, the Academy of Motion Pictures did not take Ricky Gervais up on his offer to host the Oscars for free. Xinhua/Li Rui via Getty Images

Take his opening at the 2016 Globes, telling the stars applauding him to “shut up, you disgusting, pill popping, sexual deviant scum.”

Harvey Weinstein was seated upfront. That was his second-to-last Golden Globes before #MeToo. Now the Globes are no more, the Oscars not far behind. Ratings for last year’s Oscars dropped faster than Biden’s approval rating — down 51% from 18.69 million viewers the year before.

No combination of young and old Hollywood hosts can save it, even though one source told Variety that if they pull off multiple hosts, “this will be a game changer for everybody.”

It won’t. This is exactly what’s killing Hollywood: insular groupthink and the cult-like belief that they’re doing something NEW! FRESH! ORIGINAL! — when really they’re just rearranging deck chairs on the Titanic.

Their other Achilles heel: unrelenting sanctimony. They need Gervais to say the things we’re all thinking at home, the things Hollywood finds un-say-able.

Gervais at the 2020 Globes, on Hollywood wokeness: “We were going to do an ‘In Memoriam,’ section, but when I saw the list of people this year, it wasn’t diverse enough. It was mostly white people. And I thought, ‘No. Not on my watch.’ ”

On the BS of Hollywood virtue-signaling: “Apple roared into the TV game with ‘The Morning Show,’ a superb drama about the importance of dignity and doing the right thing — made by a company that runs sweatshops in China . . . You say you’re woke, but the companies you work for — unbelievable. Apple, Amazon, Disney — if ISIS started a streaming service, you’d call your agent, wouldn’t you?”

The Academy is so clueless that they tweeted a poll, asking who we’d like to see host this year.

The answer is simple. Hire the man who hates Hollywood in order to save it.