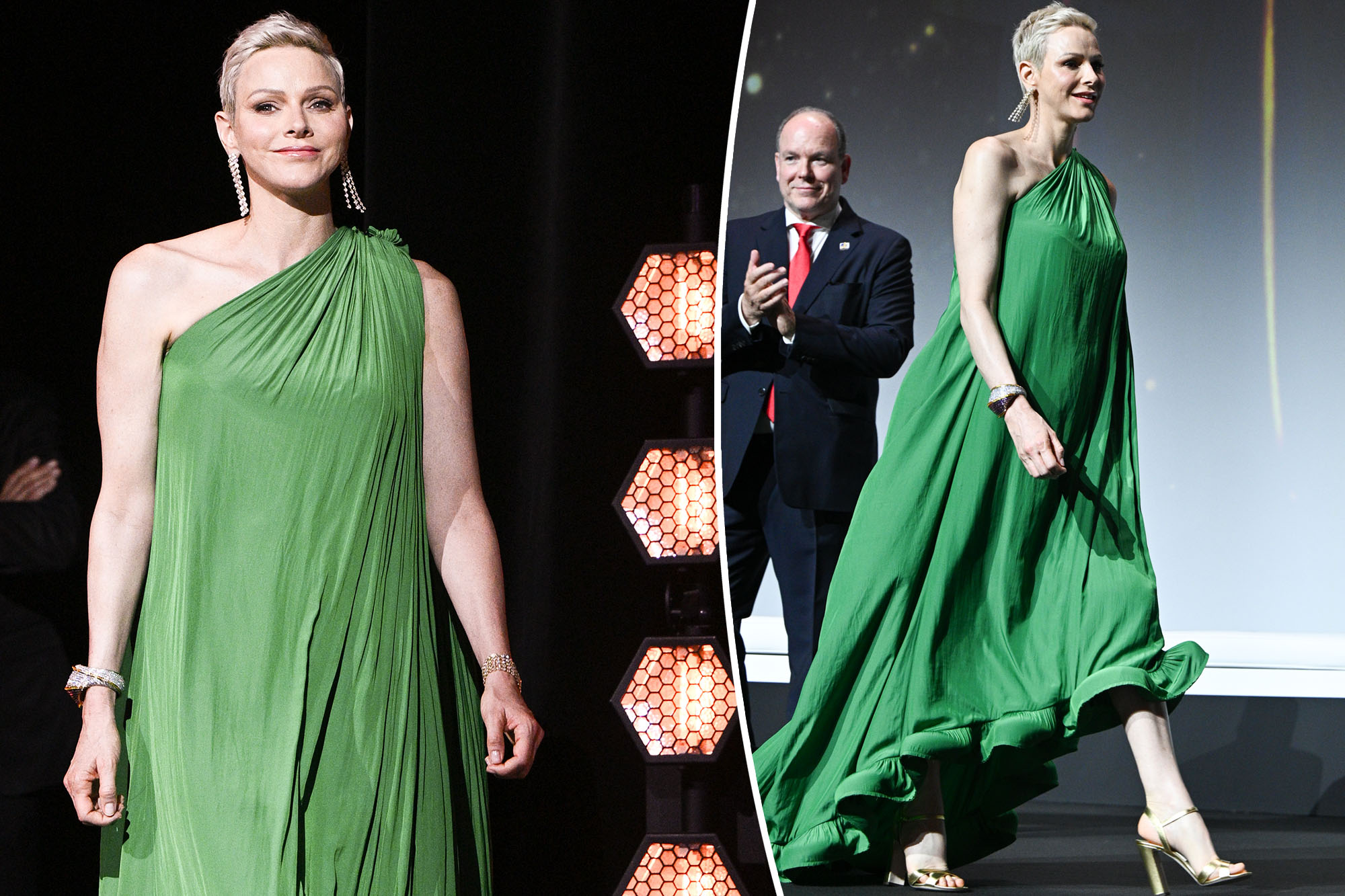 We’re green with envy over this Lanvin look.

Princess Charlene of Monaco stepped out for her first public appearance since testing positive for COVID-19 in early June, wearing a stunning Grecian-style gown on the Monte-Carlo Television Festival red carpet Friday.

The one-shouldered Lanvin gown featured a high-low hem with ruffle detail and a small train.

The former Olympic swimmer — along with her husband, Prince Albert II — looked in high spirits as she chatted with members of the crowd and even posed for selfies.

The princess is back to her usual public appearances following a bout with COVID in early June.Corbis via Getty Images

Her cropped ‘do was perfect for showing off a pair of gold multi-strand diamond statement earrings, and she added a matching bracelet on one wrist and a chunky, two-toned diamond bracelet on the other.

The pair attend the opening ceremony of the four-day-long television festival, with Albert, 64, serving as honorary president of the event, which was founded by his father, Prince Rainier III.

Charlene’s glamorous night out marks one of the few times we’ve seen the royal since the mysterious illness that nearly killed her while staying in her native South Africa last year.

Once she returned to Monaco, Albert told People that his wife would be entering a facility in Europe to “have a rest and have a real medically framed treatment,” adding, “It’s not a personal relationship issue. And if you want to discuss another speculation, it isn’t related to plastic surgery or facial work at all.”

Charlene and Albert posed with their 7-year-old twins, Princess Gabriella and Prince Jacques, at the Sainte Devote Rugby Tournament in May.Getty Images

In May, the princess made her first official appearance since returning to Monaco, attending the Monaco E-Prix with Albert and their 7-year-old twins, Princess Gabriella and Prince Jacques.

After rumors swirled that Albert pays Charlene $12 million a year to stay married to him, a source close to the princess revealed exclusively to Page Six last month that simply isn’t the case.

The royal couple posed with attendees of the festival on the red carpet, including “Downton Abbey” star Joanne Froggatt.Corbis via Getty Images

“Of course she has a generous prenup, but Albert doesn’t have to pay her to stay,” the insider said.

“After being away for so long during her illness, Charlene is so happy to be back with Albert and the kids. They spend every weekend at their country place. Albert is fully supportive of Charlene and is also helping her with her charities.”

Priyanka Chopra gifts Nick Jonas, baby sneakers on Father’s Day
Beautiful Julia Fox looks in a revealing outfit and unusual makeup
We use cookies on our website to give you the most relevant experience by remembering your preferences and repeat visits. By clicking “Accept All”, you consent to the use of ALL the cookies. However, you may visit "Cookie Settings" to provide a controlled consent.
Cookie SettingsAccept All
Manage consent