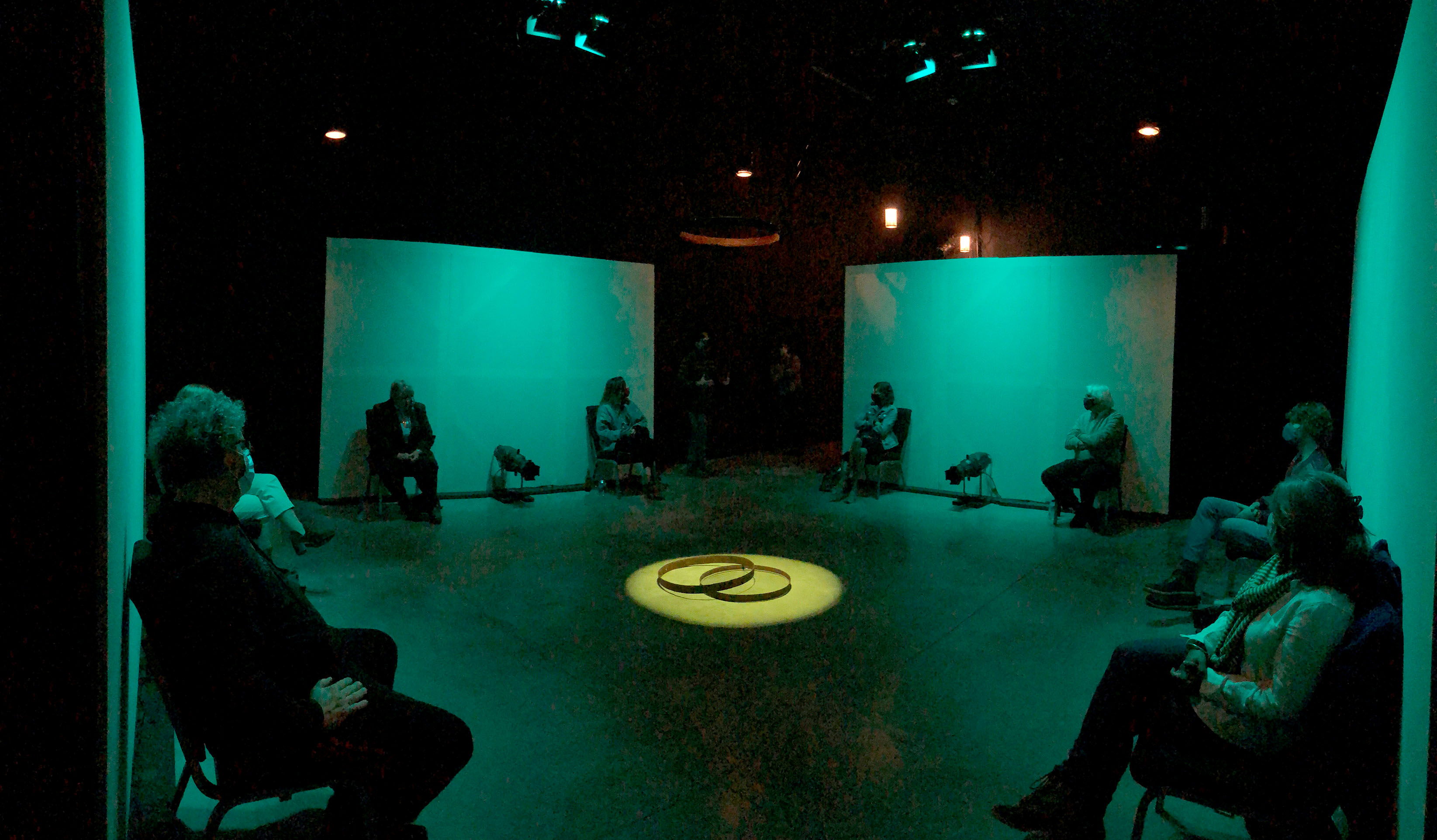 COVID-era entertainment has so far been about one thing: Zoom.
“Saturday Night Live” mocked Zoom meetings in episodes that were filmed from the cast’s apartments. Richard Nelson’s play “What Do We Need To Talk About?” depicted a WASP family’s Zoom call. Netflix’s new TV series “Social Distance” is a lot of video chatting.
It’s overkill. What once was cute is now impossibly tedious.
Thank goodness Denizen Theatre has swapped Zoom for a room.
The small theater in New Paltz is one of the precious few in New York putting on in-person shows for audiences right now. Broadway, of course, remains closed till at least next fall.
How on earth have they managed it? Easy. By having no live actors.
For their world premiere of Neil LaBute’s “True Love Will Find You in the End” — a coronavirus pandemic thriller — just eight audience members sit in the round and listen to two prerecorded performers enact a tense two-hander. (Tickets are $24 to $28.)
It can, at times, feel like a podcast. But the technique is a sharp workaround for a couple of reasons: Ticket-buyers need to be coaxed back to the theater in a comfortable, gradual way, rather than be told to jam-pack into 1,500-seat auditoriums in a few months. And, just as importantly, we’ve forgotten what it’s like to watch something without distraction. It’s nearly impossible to enjoy TV, read or listen to music without glancing at the news — good or bad — on your phone.
Even at a show without actors, you’re told to turn that damn phone off and listen.
Gia Crovatin and KeiLyn Durrel Jones star in “True Love Will Find You in the End.”Joe GaffneyLaBute’s writing, with its usual domestic unraveling, is well-suited to an audio-play format. A husband (KeiLyn Durrel Jones) and a wife (Gia Crovatin) seem to separately discuss with another person — whom we never hear from — about the last several months of their lives. How the pandemic went from terrifying to novel to monotonous. The comments are relatable, and we assume they’re speaking to a therapist.
Neil LaBute, however, would not be Neil LaBute if the 45-minute drama was just a series of poignant observations about our lockdown lives. The man likes a shocker. So, the story takes a perverse turn, and one character starts living a nightmare within a nightmare.
Director J.J. Kandel’s staging, such as it is, shows great ingenuity given the mountain of restrictions. The experience is kind of like going to a 4-D IMAX movie. The walls in the theater change color when each character speaks, and the direction of the sound moves around to keep us engaged. In the center of the stage are two metal rings, and one is filled with water. Droplets from the ceiling hypnotically fall into the pool (on purpose), perhaps to say that there is a crack in the veneer.
“True Love Will Find You in the End” is not the playwright’s best work, although it is still a fun and creepy time, and shows without actors are not the future of theater. But small, unusual, brave steps like these are essential to the broader theater’s eventual comeback.

How to visit Santa in NYC under tight COVID-19 restrictions
Candace Owens ‘not sorry’ for criticizing Harry Styles
We use cookies on our website to give you the most relevant experience by remembering your preferences and repeat visits. By clicking “Accept All”, you consent to the use of ALL the cookies. However, you may visit "Cookie Settings" to provide a controlled consent.
Cookie SettingsAccept All
Manage consent