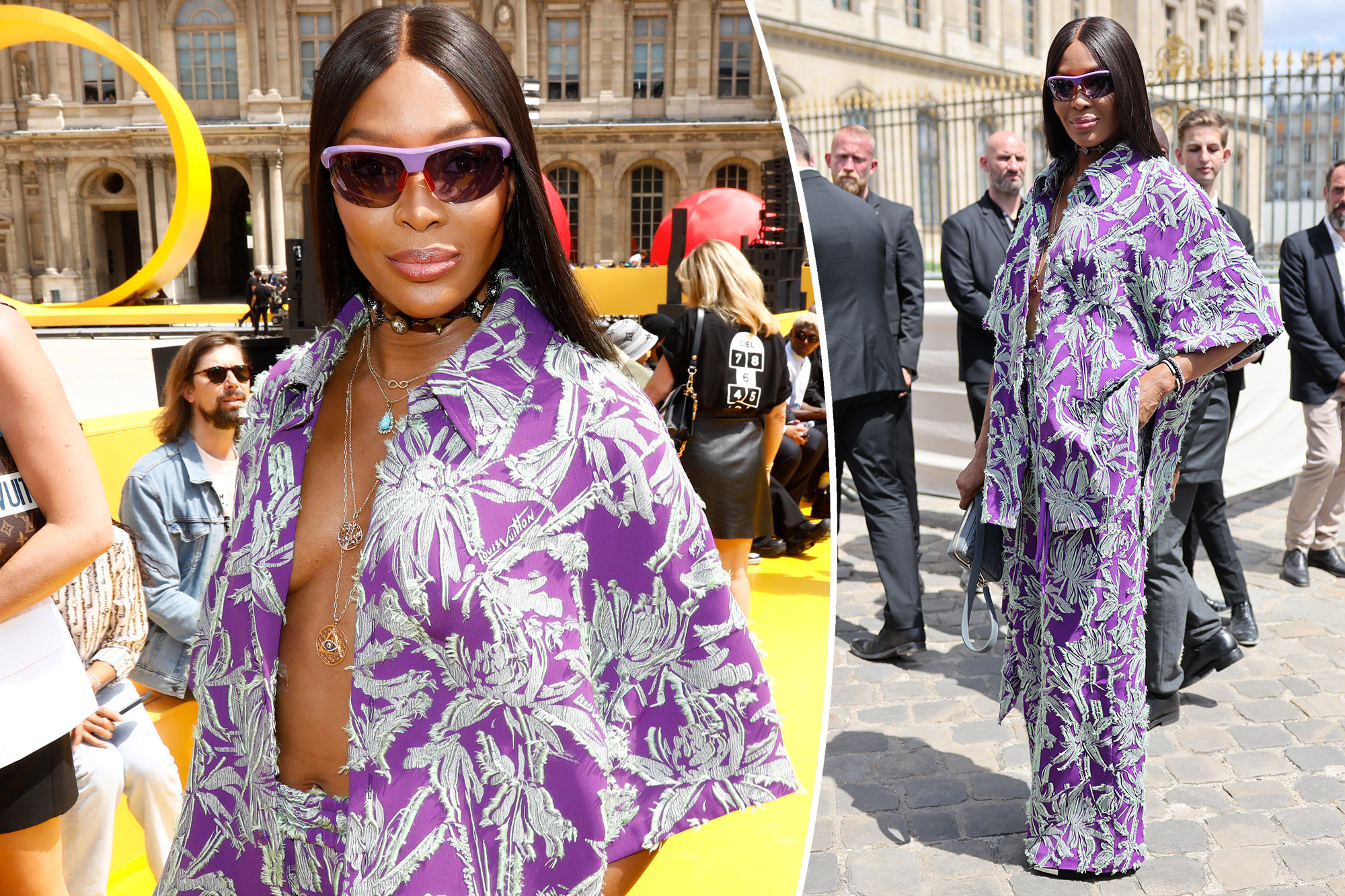 Naomi Campbell, 52, gave her fashion tape a run for its money when she stepped out at Paris Fashion Week in a wide-open purple printed shirt today.

The supermodel somehow managed to avoid a wardrobe malfunction in her unbuttoned Louis Vuitton top, wearing the tropical-print shirt with a pair of matching trousers for the label’s menswear spring/summer 2023 collection.

At first glance, it appears to be a typical printed Hawaiian-style shirt, but the floral design is actually embroidered onto the piece.

Although she wore nothing underneath her wild shirt, Campbell added multiple necklaces, wearing four layered pendants of various lengths along with a funky black choker.

The mom of one — who recently showed off her 13-month-old daughter’s first steps —  added coordinating purple sunglasses, a stack of sparkling bracelets and a pale blue Louis Vuitton logo bag to her standout outfit.

Her bright attire matched perfectly with the playful theme of the show, which Louis Vuitton described as a “magnified playground” on its Instagram account.

The fashion house said its runway — situated in the Cour Carrée of the famous Louvre museum — was modeled after “a giant toy racetrack” as well as “a yellow brick road for the imagination.”

The supermodel waved to onlookers as she attended the Louis Vuitton show at the Louvre.GC Images

Justin Timberlake, Jessica Biel and Tyga were among the other famous guests who attended the outdoor fashion show, which took place on a scorching hot summer’s day in the French capital.

This isn’t the first time Campbell has had a purple moment in recent months; she wore a stunning Valentino gown in the shade for the Prince’s Trust gala back in April.

Whether it’s a ballgown or a risqué shirt, this model sure does rock the regal color.

Campbell, who serves as a global ambassador for The Queen’s Commonwealth Trust, made a splash in a purple evening gown for The Prince’s Trust gala. GC Images

Britney Spears shows off new haircut after Sam Asghari wedding
Kim Kardashian, Pete Davidson ‘inject their pimples together’
We use cookies on our website to give you the most relevant experience by remembering your preferences and repeat visits. By clicking “Accept All”, you consent to the use of ALL the cookies. However, you may visit "Cookie Settings" to provide a controlled consent.
Cookie SettingsAccept All
Manage consent