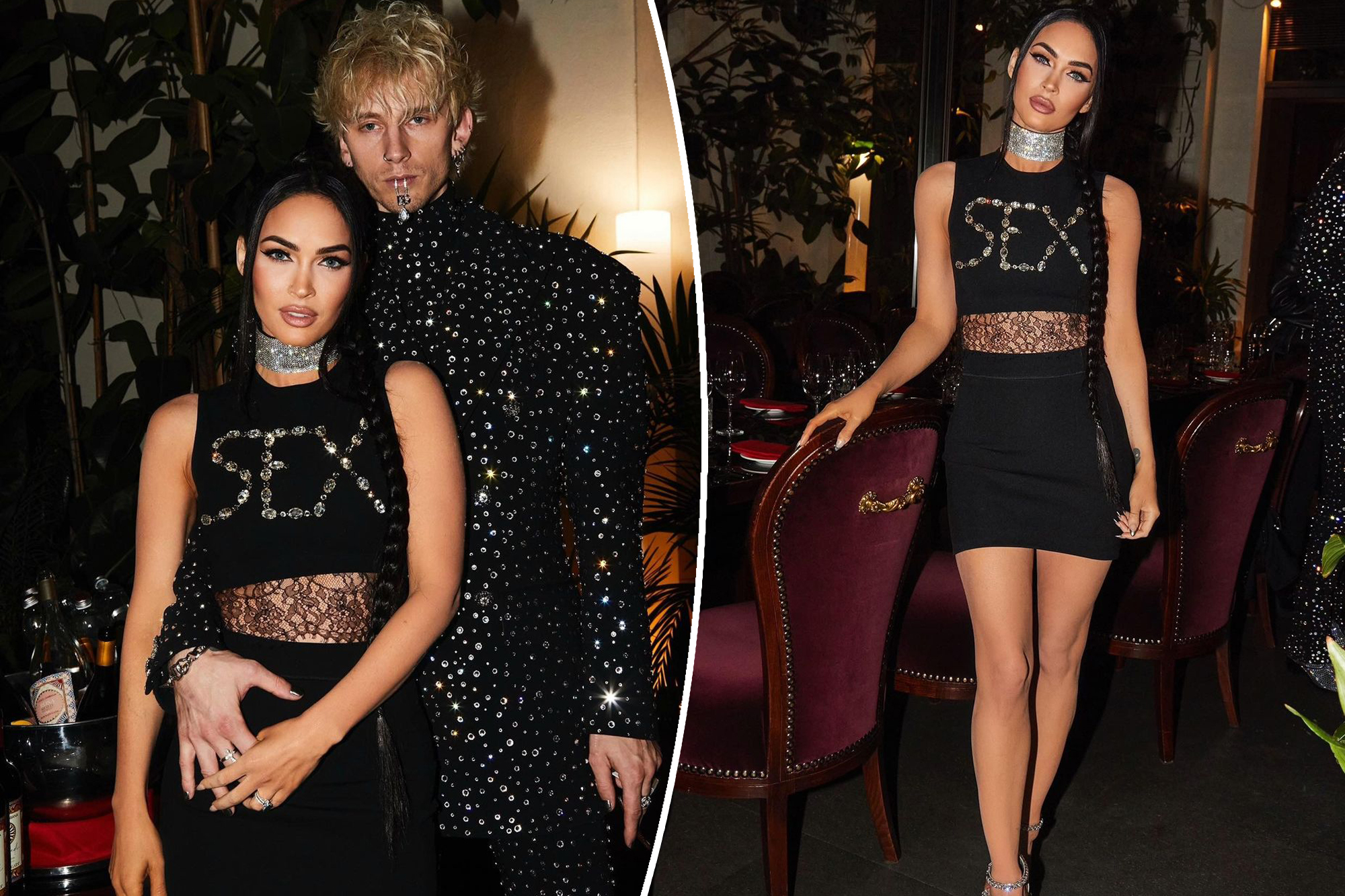 The “Jennifer’s Body” star, 35, celebrated her engagement to Machine Gun Kelly with a trip to Milan Fashion Week over the weekend.

While the 31-year-old rapper (real name Colson Baker) walked as a model in Dolce & Gabbana’s menswear show — and closed it out with a performance of his song “Bloody Valentine” — his “twin flame” supported him in the front row, clad in a sheer lace bodysuit with lace-up leather pants.

But she saved her most statement-making outfit for later, wearing a bedazzled Dolce & Gabbana tank top ($1,295) emblazoned with the word “sex” to the brand’s post-show dinner.

As usual, MGK matched his soon-to-be-spouse in a crystal-studded suit.

At the dinner, Fox revealed that her style has “definitely changed” over the course of the couple’s relationship, and that she “kind of gave up on fashion” before meeting Kelly.

Fox supported MGK while he modeled and performed in the fashion show.meganfox/Instagram

“Before it wasn’t something I was focused on or thought about. Because as an actress I had been classified or put in the category of being a sex symbol. And publicists come in and they bring in a stylist and it’s all about dressing more seriously, so that the world will take you more seriously as an actor,” she told Vogue.

“But they weren’t dressing me the way in which I liked to express myself … I was like, I don’t f—king care, whatever you put me in because I’m not going to like it anyway. Until I met [MGK],” she continued.

Fox went on to say that musicians “can be so much more flamboyant” in how they dress, while actors often aren’t encouraged to express themselves through style.

“I remember we got all these racks of dresses for the Golden Globes, and I hated all of them,” she recalled. “I was like, well, where’s the stuff that lets me be me — where’s the good stuff? … Ladies’ lunch at Barneys? I don’t dress like that!”

Continued the actress, “And the publicists would say, ‘Well, these are the best dresses that are being designed right now.’ So like, f—k it, I don’t like clothes. And then I was with him and it was like: Oh, these clothes exist? OK!”

And Fox certainly hasn’t been shy about expressing her true style over the past year, having stunned in numerous nearly-nude dresses on red carpets and stepped out in a whole series of bra tops.

Paulina Porizkova models black lingerie on Instagram
Olivia Culpo shades American Airlines in open-sided dress
We use cookies on our website to give you the most relevant experience by remembering your preferences and repeat visits. By clicking “Accept All”, you consent to the use of ALL the cookies. However, you may visit "Cookie Settings" to provide a controlled consent.
Cookie SettingsAccept All
Manage consent