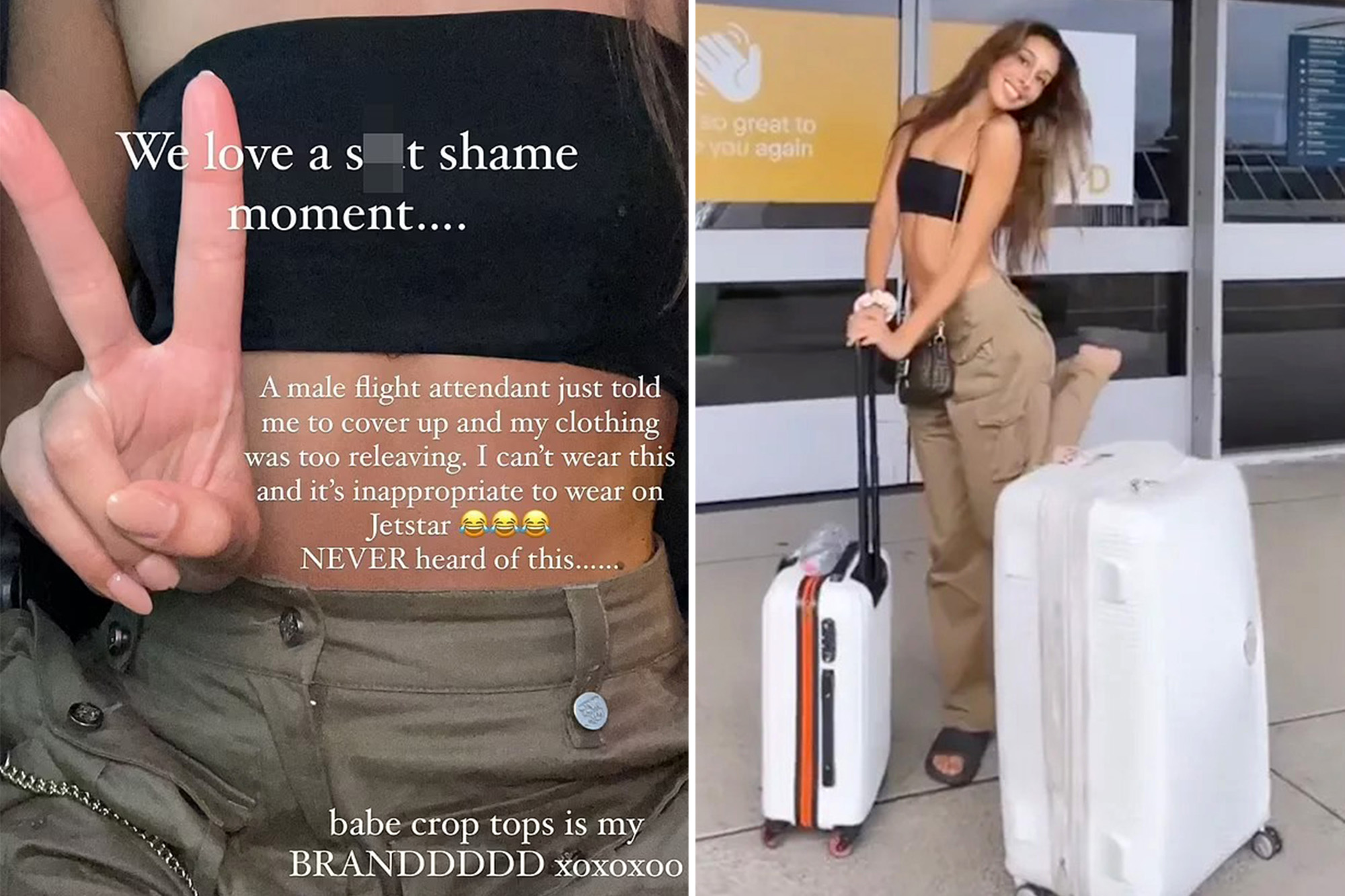 Checking in the luggage. Queuing for security. Unpacking your bags in front of total strangers.

By the time we actually make it to our flight’s gate, we feel more in need of a holiday than ever. Right?

Among all the chaos of traveling, our favorite perks (other than settling into the airport bar at 6 am) is getting to wear our comfy clothes out and about.

So when Amelia Marni boarded her flight to Bali earlier this week, the former “Love Island Australia” star didn’t think twice about the jersey black crop-top and khaki cargo-trousers she was wearing.

However when she boarded the plane, the social media star was informed that her outfit violated the airline’s dress code.

Describing how she’d been “slut shamed,” Amelia explained: “A male flight attendant just told me to cover up and my clothing was too revealing.

“I can’t wear this and it’s inappropriate to wear on JetStar. NEVER heard of this.”

Sharing a photo of herself in her seat, she joked: “Babe, crop tops are my BRANDDDDD xoxoxo.”

Following the incident, Amelia then tried to look up their policy online and could only find a rule about “offensive clothing”.

Amelia claims she was told to cover up her stomach by a male flight attendant.ameliamarni/Instagram

It read: “Please refrain from wearing any clothing or carrying personal items that display words, images, symbols or slogans that may reasonably be deemed offensive.”

As her outfit clearly didn’t fall into this remit, Amelia sarcastically said: “We love a man abusing his authority.”

After sharing the awkward incident with her 340,000 Instagram followers, one replied: “I used to work for Jetstar and they literally don’t give a f— what you wear.”

Amelia blasted the airline for shaming her. ameliamarni/Instagram

“I’m actually so embarrassed,” Amelia said. “He was so mean.”

In another Instagram Story, the social media star said the man came over again when she didn’t cover her crop top.

Turning to a female flight attendant, Amelia claims she said: “Wait, is this not allowed? I’m only showing the tiniest bit of tummy.”

The woman then told her colleague that Amelia’s outfit was “fine” and the man then dropped it.

When she boarded the plane, the social media star was informed that her outfit violated the airline’s dress code.ameliamarni/Instagram

A Jetstar spokesperson told 9Honey: “While we do have basic dress requirements on our flights (ie. shoes), we do not have any policy regarding crop tops.

“Our team will reach out to Amelia and to our crew member to understand what’s taken place, and we apologize if there’s been any misunderstanding of our policy.”

This story originally appeared on The Sun and was reproduced here with permission.

Eric Clapton cancels shows after testing positive for COVID-19
Chris Rock could be named host of Oscars 2023
We use cookies on our website to give you the most relevant experience by remembering your preferences and repeat visits. By clicking “Accept All”, you consent to the use of ALL the cookies. However, you may visit "Cookie Settings" to provide a controlled consent.
Cookie SettingsAccept All
Manage consent