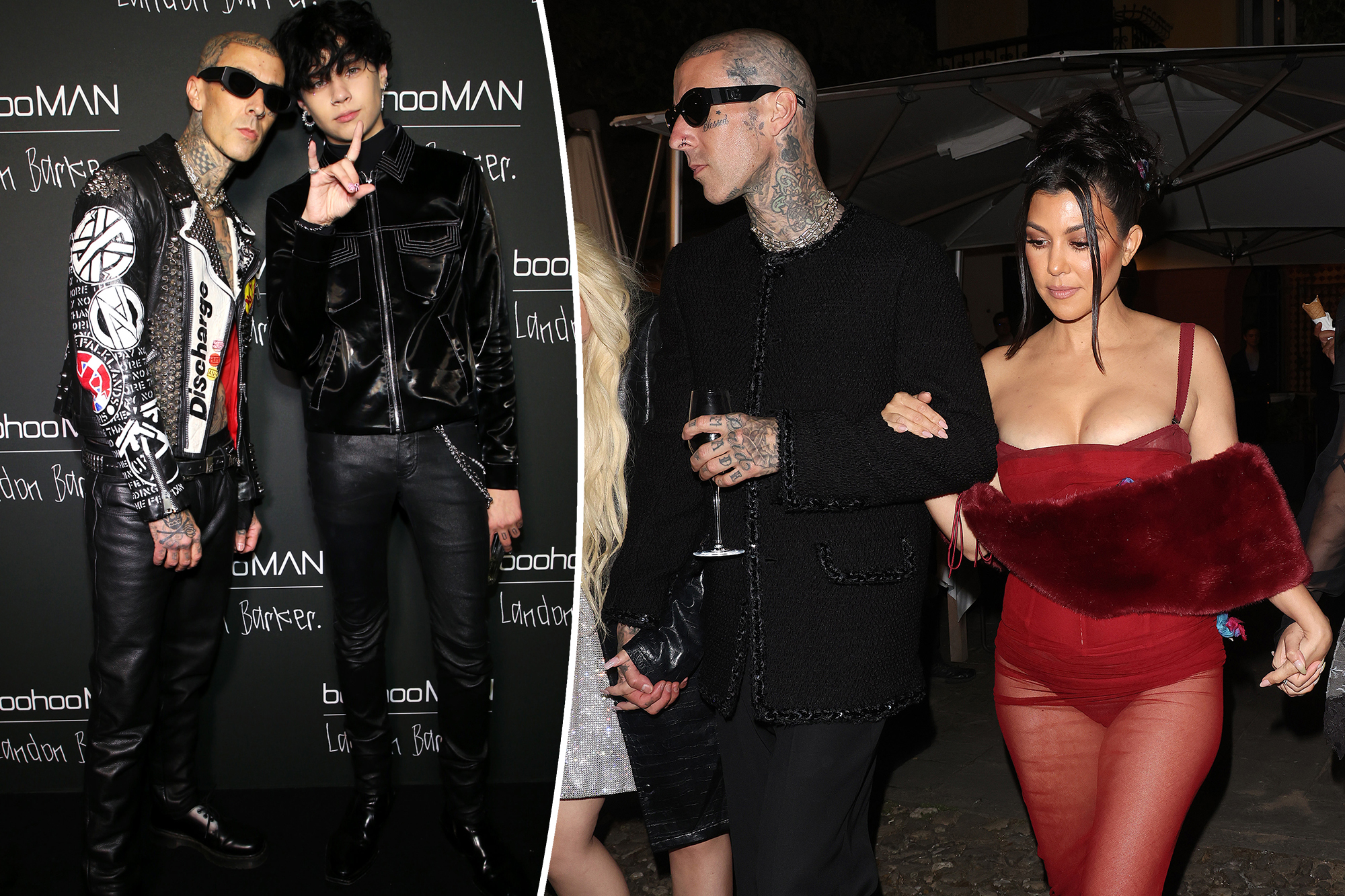 Landon Barker is following in his father’s tattooed footsteps.

Travis Barker’s son Landon, 18, released a fashion line but says he’s still having some trouble keeping up with his dear old dad thanks to Kourtney Kardashian’s influence.

On Tuesday, the “Die in California” collaborator celebrated the launch of his boohooMAN collection surrounded by family, including his dad and sisters Alabama Barker and Atiana de la Hoya.

During the Hollywood launch, the TikTok star opened up to People about how his father’s pop punk style has influenced him since he was a baby, when “he would always put me in cool old rock band tees.”

Before Travis married Kourtney Kardashian, Landon was the chief fashion stylist in his household. “I got my dad into fashion more than he got me into fashion, because when I was younger all my dad would wear is black Dickies and a punk rock t-shirt for years,” the aspiring musician explained.

Now, Landon credits his dad’s new leading lady with forcing him to elevate his rockstar style. “When he started being with his wife, he started stepping up his fashion a little bit, just so he can get on her level.”

Landon revealed that for the “longest time I was even more fashionable than my dad,” until “he stepped it up a lot,” admitting, “Now he can out-dress me.”

Travis Barker stepped up his style thanks to wife Kourtney Kardashian. GC Images

When Travis, 46, hit the Met Gala red carpet alongside Kourtney in April, he opened up about straying from his uniform, which he described as “no shirt, a pair of pants and some Converse or some Doc Martens.”

And, their Italian wedding was entirely supported by Dolce & Gabbana, with everyone in the now-blended Barker-Kardashian family wearing new and vintage clothing from the brand.

Landon describes his androgynous boohooMAN collection as “rockstar-ish, grungy, punk rock style” and commented in the press release, “I feel like when someone is wearing one of these pieces, it’s like they picked it straight out of my closet.”

The Gen Z clothing collection includes leather jackets, sheer pink shirts, oversized hoodies, distressed t-shirts, biker jackets and more. One favorite is a vegan leather jacket with a skull based on a necklace he had made “four or five years ago.” The aesthetic is fitting, as his father launched a skull-themed jewelry and home decor line in February.

It looks like the whole family has stepped up their style. Getty Images for ABA

It looks like Travis and Landon are having no problem keeping up with the Kardashians style-wise.

Beyoncé covers British Vogue in headpieces, platform boots
Kate Middleton is pretty in pink pastel pantsuit
We use cookies on our website to give you the most relevant experience by remembering your preferences and repeat visits. By clicking “Accept All”, you consent to the use of ALL the cookies. However, you may visit "Cookie Settings" to provide a controlled consent.
Cookie SettingsAccept All
Manage consent