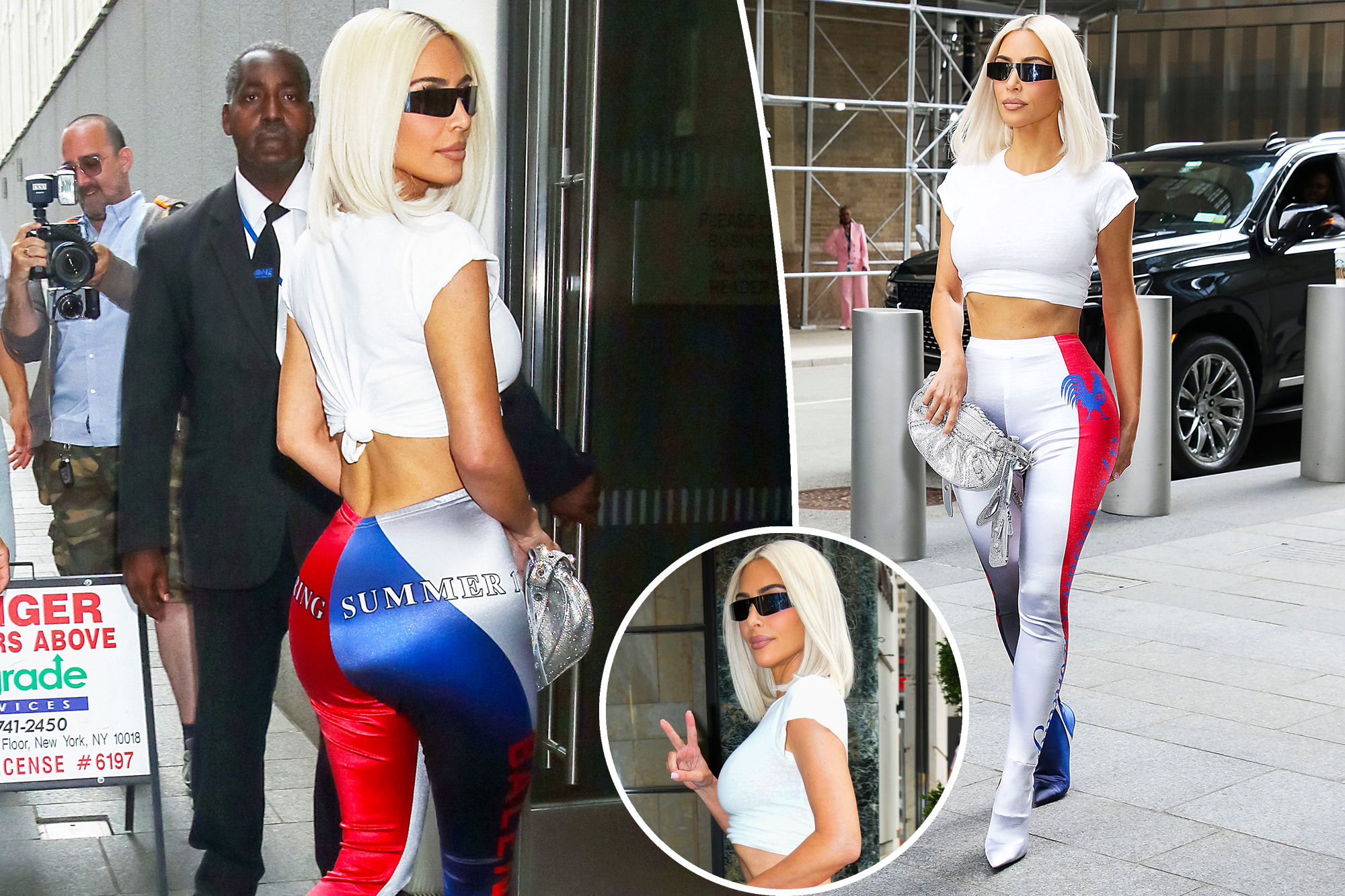 The Skkn by Kim founder, who’s been open about the difficulties of dressing herself without the help of her ex (and de facto stylist) Kanye West, shed some light on her new aesthetic during a chat at Condé Nast’s New York headquarters Tuesday.

“I would say it’s definitely, like, future alien Barbie vibes,” Kardashian said when asked to describe her personal style at present, adding, “I do struggle with casual. I’m trying to get better at that.”

For her visit with Condé’s editors, the 41-year-old wore a white Re/done baby tee ($90) tied up to show off her midriff, plus a pair of her beloved Balenciaga “pantaleggings” in graphic red, white and blue.

The luxury label’s campaign star topped it all off with a blinged-out “Le Cagole” bag ($7,000) and slim, shield-style mirrored sunglasses ($490) that embodied her new futuristic vibe.

How many pairs of “pantaleggings” can one person possibly own?GC Images

And the beauty chameleon wore her hair in a platinum blond bob — perhaps as a nod to Vogue editrix Anna Wintour, with whom she snapped a selfie.

Since filing for divorce from West, 45, Kardashian has struggled to cultivate a style separate from the Yeezy designer’s.

“I’m having panic attacks, like, ‘What do I wear?”” she told sister Kourtney on a recent episode of “The Kardashians,” adding, “How do I wear something that hasn’t been pre-vetted first?”

Kardashian snapped a selfie with Anna Wintour during her visit.GC Images

Kardashian did style herself for the WSJ. Magazine Innovator Awards in November 2021, but her skintight leather Skims x Fendi look clearly didn’t pass muster with West.

“He called me afterwards. He told me my career is over and then he showed me a picture of Marge Simpson wearing something similar,” she recalled on her Hulu reality show.

The look in question was from Skims’ collaboration with Fendi.Getty Images for WSJ. Magazine I

Despite Kimye’s split, the “Famous” rapper still apparently wants to dress his ex, with Kardashian recently revealing “he wants to quit everything and dedicate his life to being my stylist.”

“I just want the outfits lined up in my room — I’m a robot. I will operate as such,” she told Kourtney and Khloé on the premiere episode of “The Kardashians” in April.

Perhaps dressing like a robot is the next best thing?

Ashley Graham shows off body after baby in colorful corset
Madonna refused to dress down for ‘Will & Grace’ guest role
We use cookies on our website to give you the most relevant experience by remembering your preferences and repeat visits. By clicking “Accept All”, you consent to the use of ALL the cookies. However, you may visit "Cookie Settings" to provide a controlled consent.
Cookie SettingsAccept All
Manage consent