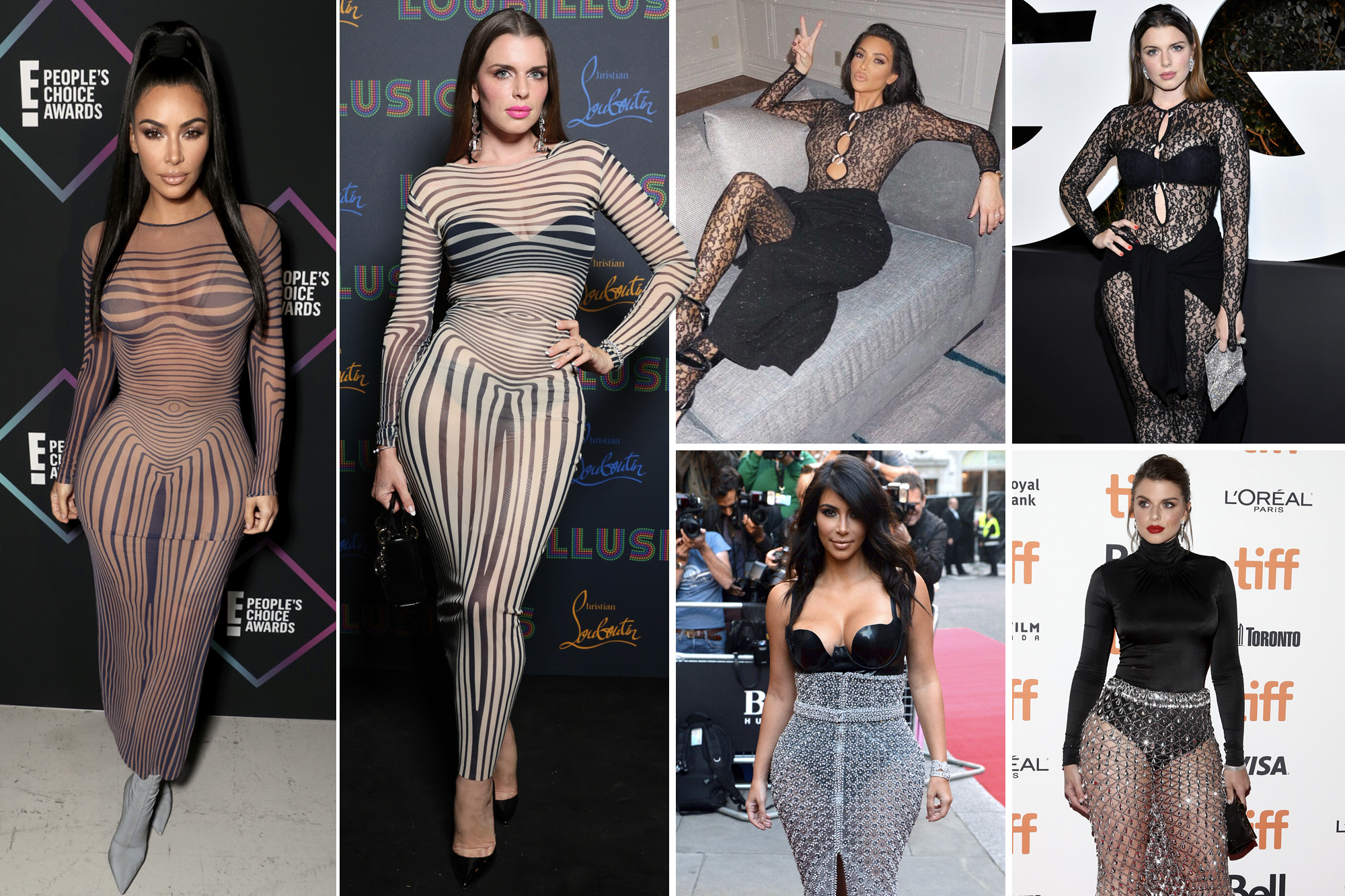 Kanye West clearly has a type.

The rapper and fashion force famously overhauled ex Kim Kardashian’s wardrobe when the duo started dating in 2012, tossing her bandage dresses and bulky designer totes to make way for the sleek, monochromatic styles that still define her look to this day.

And now that West and Julia Fox are an item, it seems the “Uncut Gems” actress is getting a makeover of her own, with her new beau treating her to racks of Diesel duds and whisking her off to Paris Fashion Week.

“Kanye’s doing with Julia what he did to Kim,” a Kardashian source recently told Page Six. “He’s controlling what she wore — making sure she appears as the set image that he has in his mind.”

But in fact, 44-year-old West might not have to work much at all to transform Fox, 31, into the woman of his dreams. A self-proclaimed “die-hard, OG” fan of the Kardashians, Fox seems to have been taking cues from the Skims founder’s closet for years; the two bodacious brunettes have even stepped out separately wearing the exact same outfit on several occasions.

Below, all the twinning moments that prove that while Fox and West may be “kindred spirits,” she and Kardashian are style twins.

Kardashian, 41, paired a black latex Atsuko Kudo bustier with a sheer, shimmering Ralph & Russo Couture skirt for the 2014 GQ Men of the Year Awards with West. While Fox might’ve opted for different designers at the Toronto Film Festival premiere of “Uncut Gems” in 2019 — Paco Rabanne, to be precise — there’s no denying the similarities between their styles.

The KKW Fragrance founder took Alexander Wang’s lacy black onesie for a spin in January 2019; that December, Fox picked the same sexy, skirted style for the GQ Men of the Year Awards.

Any real style star knows you haven’t made it until you’ve got access to top designers’ archives. Kardashian and Fox both appear to be fans of vintage Versace in particular, having picked likeminded black gowns with plunging necklines and slit skirts for the 2019 amfAR Gala New York and a 2020 Golden Globes afterparty, respectively.

In 2014, Kardashian’s uniform became a Max Mara coat layered over a matching body-con dress. Fox went for the same fashion formula at the 2020 Whitney Art Party, choosing a look from the brand in bright, eye-catching blue.

Long before linking up with West, Fox stripped down to her Skims to promote the brand’s Summer Mesh collection in 2020.

Getting dizzy? Considering that both Kardashian and Fox have rocked Jean Paul Gaultier’s “body morphing” frock on the red carpet — the former at the 2018 People’s Choice Awards, the latter at a 2021 Christian Louboutin party — we couldn’t blame you.

Remember when West emailed Kardashian instructing her to ditch her oversized shades in 2018? It seems KKW’s still all about tiny sunglasses — and so is Fox. Two months after Kardashian posed on Instagram in a glossy leather Balenciaga look accessorized with narrow frames in November 2021, the actress had a “Matrix” moment of her own.

You can’t hang with West without wearing Balenciaga, the Grammy winner’s luxury label of choice. And Fox took things a literal step further during Paris Fashion Week in January 2022, slipping into the very same pair of thigh-high silver boots Kardashian’s been snapped in since 2016.