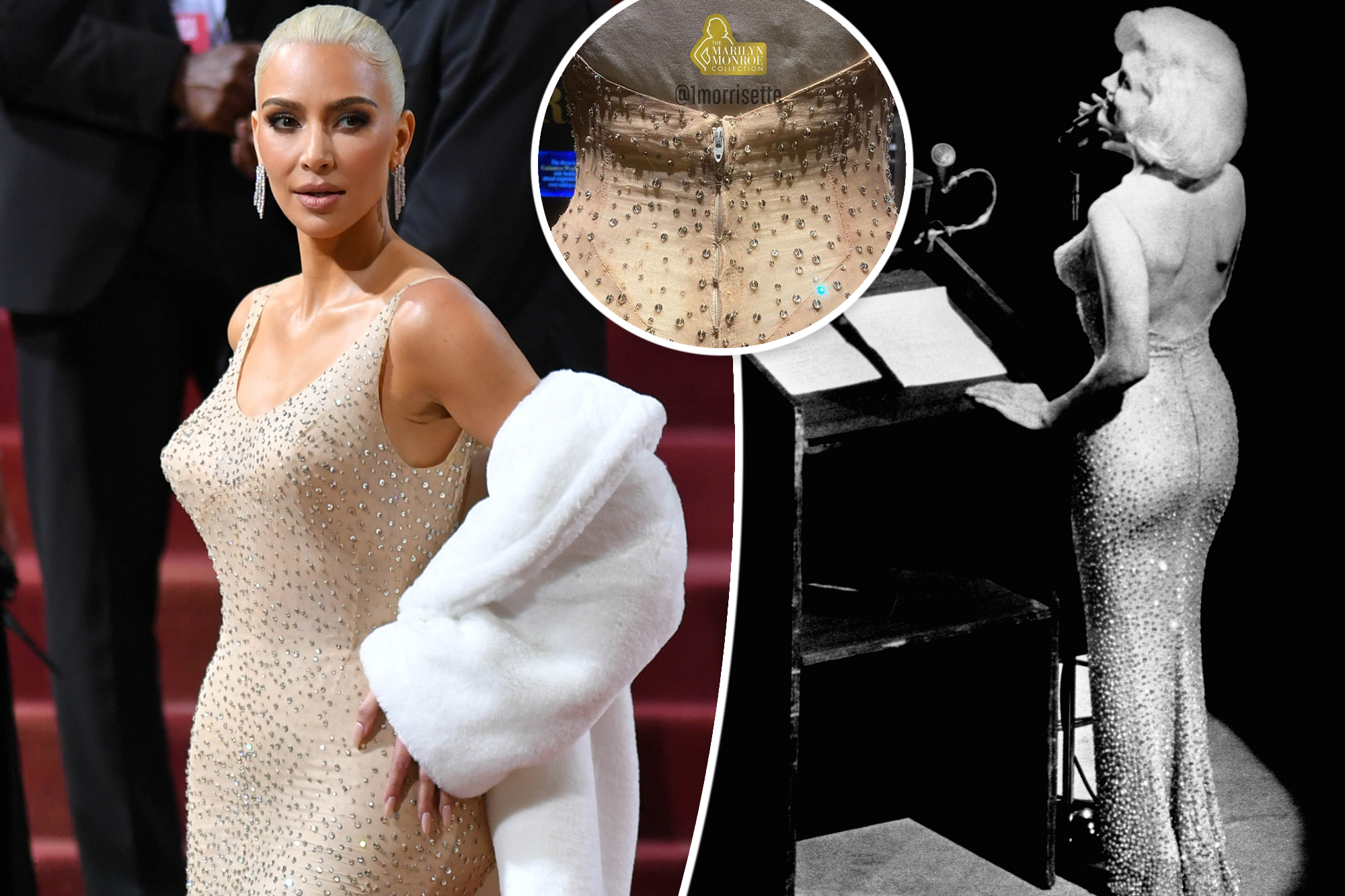 Give a girl the right shoes, and she can conquer the world. Give her the wrong dress, and she may just piss off millions of fans.

The “Kardashians” star, 41, notably dropped 16 pounds ahead of the event in order to squeeze into the historic gown, and even changed into a replica once she got to the entrance of the party, as she was unable to move freely in the original.

“I’m extremely respectful to the dress and what it means to American history,” she told Vogue ahead of the party. “I would never want to sit in it or eat in it or have any risk of any damage to it and I won’t be wearing the kind of body makeup I usually do.”

However, it appears that just posing for photos on the red carpet with Pete Davidson — who later dyed his hair platinum blond to match his girlfriend’s Marilyn-inspired locks — may have caused damage to the “world’s most expensive dress.”

On Monday, Pop Culture posted side-by-side photos of the gown, allegedly from before and after Kardashian wore it to the Met. One of the snaps shows signs of stretched fabric and missing crystals, particularly around the dress’ back closure.

Marilyn Monroe’s iconic dress has reportedly been damaged after being worn by Kim Kardashian at the Met Gala.The dress now shows signs of tearing, and several crystals are either missing or hanging off of it. pic.twitter.com/cFu1lUBmzS— Pop Crave (@PopCrave) June 13, 2022

“Kim should’ve never worn that dress to begin with. I mean yes it’s nice to pay homage to Marilyn but she could’ve had a new dress made and replicated. This was a timeless and iconic artifact that’s been ruined,” one person tweeted in response. “Leave it to kim to destroy a historial piece of art,” another said.

A third wrote, “Congratulations to the Met Gala for showcasing a real-life example of why a conservation department like the Costume Institute is necessary for historically significant garments.”

The dress had no visible signs of damage when it was photographed in 2016. AFP via Getty Images

While some Monroe experts were “disappointed” to see Kardashian in Monroe’s “extremely fragile” gown at the Met, Ripley’s Believe It Or Not! Museum — which loaned the look to the star and is currently displaying the garment at its Hollywood location — previously told the Post that pains were taken to prevent any possible damage.

“We take great pride in owning the ‘Happy Birthday’ dress and consulted with multiple textile experts and conservators on this endeavor,” Ripley’s said after the gala. “While none were adamantly for or against Kim wearing the gown, their input helped us craft a set of precautions and procedures for the Met Gala. This caution proved to be sound, as no damage occurred at last night’s event.”

A Ripley’s representative did not immediately respond to Page Six Style’s request for comment on the new photos.

Victoria Beckham starred in a satin slip dress with an open back
Britney Spears married Sam Asgari: the first details of the sensational wedding ceremony
We use cookies on our website to give you the most relevant experience by remembering your preferences and repeat visits. By clicking “Accept All”, you consent to the use of ALL the cookies. However, you may visit "Cookie Settings" to provide a controlled consent.
Cookie SettingsAccept All
Manage consent