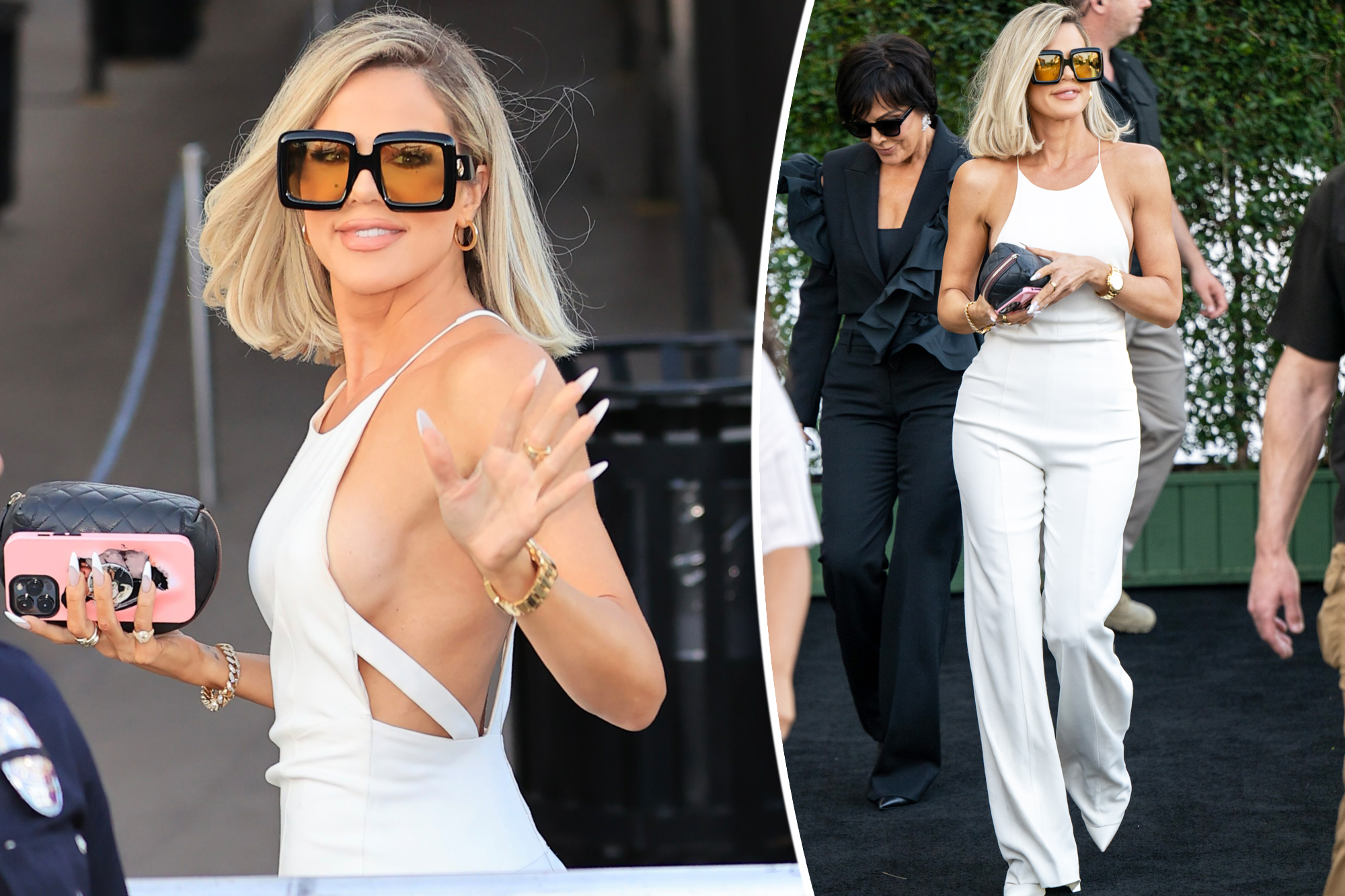 The reality star, 37, stepped out at a Hulu For Your Consideration panel last night to promote her new “Kardashians” show in a sexy white jumpsuit by Narciso Rodriguez, displaying a peek of side boob in the wake of ex Tristan Thompson’s cheating scandal.

The best part? This isn’t the first time she’s rocked the outfit following a split.

Kardashian wore the same white ensemble in 2016 while out with her ex, French Montana, the same day her split from James Harden was announced.

While she covered up with a long tan duster for its first outing, the blond bombshell showed off the full, daring look this time.

Kardashian looked glamorous in her Gucci shades as she greeted onlookers at the Hulu event.GC Images

The wide-legged outfit features a halter neckline, an open back with criss-cross straps and a slim-fitting bodice, and she kept the sleek look going with chic gold accessories.

She swapped out a purse for a black Chanel cosmetics pouch, clutching her phone in a pink case with a family photo on the back.

Kardashian wore the jumpsuit for a 2016 dinner with French Montana at The Nice Guy in West Hollywood.ROLO / AKM-GSI

Her appearance comes in the wake of today’s season finale of “The Kardashians” in which Khloé learns of ex Tristan Thompson’s paternity scandal from her sister, Kim.

“I feel not really in my own body, like these things are just happening, and I’m just going through the motions,” the Good American founder said, “but when things happen to you a couple times you do kind of become immune to them, which is really sad.”

Despite the drama going on with Thompson — who is the father of Kardashian’s daughter, True —  the Good American founder looked in high spirits as she waved to fans at last night’s Hulu event.

Meanwhile, Kendall Jenner was by her sister’s side in a gray blazer and fitted pencil skirt, adding a sparkling diamond cross necklace and clear heels.

The Kardashian/Jenner matriarch, Kris, was also on hand to support her daughters, looking elegant in a ruffled black trouser suit by Alexander McQueen with cutouts at the shoulder and a bright purple croc-print Hermés purse.

As for Khloé, she’s clearly still building a revenge wardrobe to go with her “Revenge Body.”

Rebel Wilson stuns in vintage-inspired bikini set
Blake Lively chooses the perfect dress for a hot summer in the city
We use cookies on our website to give you the most relevant experience by remembering your preferences and repeat visits. By clicking “Accept All”, you consent to the use of ALL the cookies. However, you may visit "Cookie Settings" to provide a controlled consent.
Cookie SettingsAccept All
Manage consent