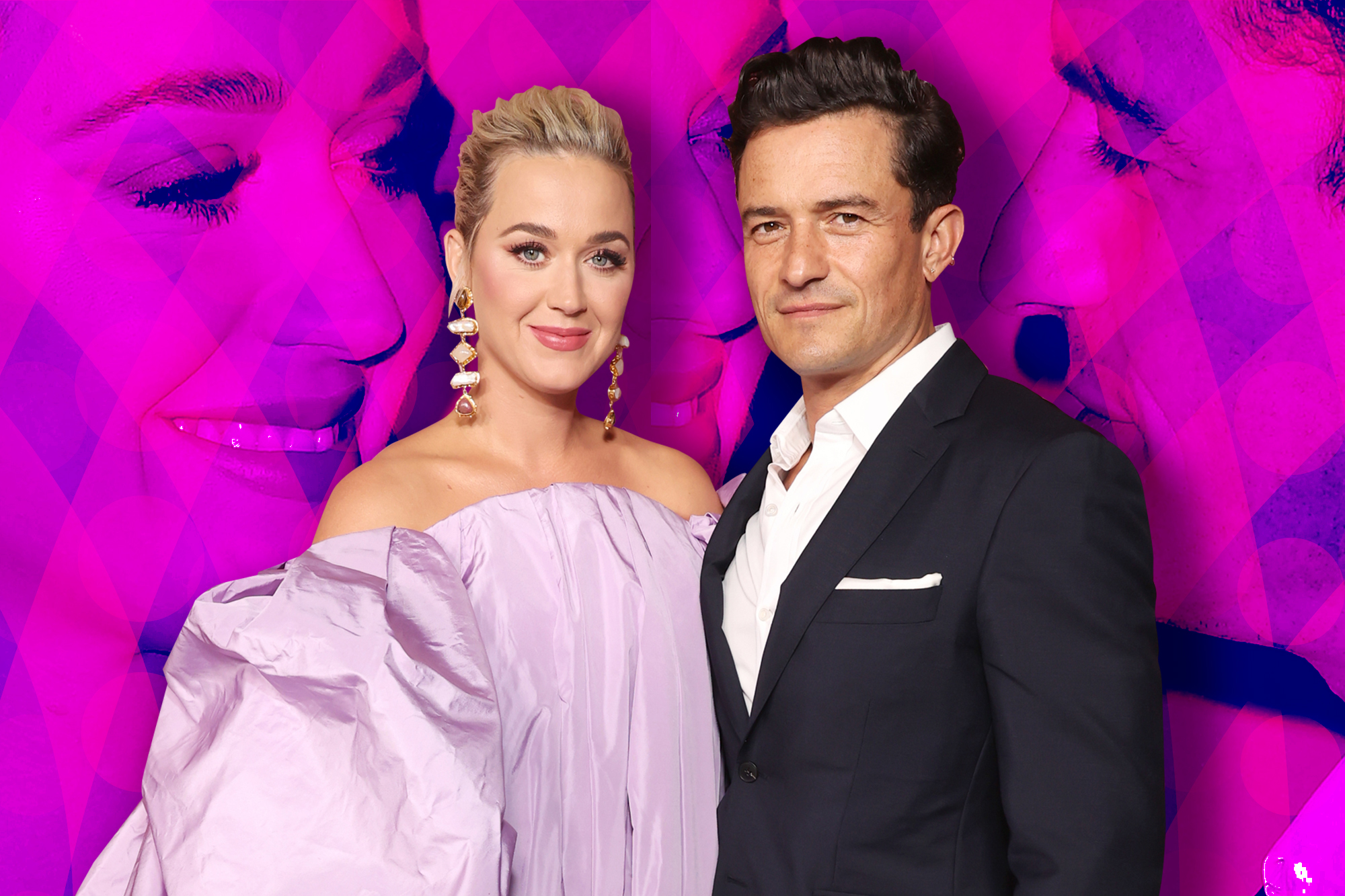 Pop goddess, global icon and queen of camp Katy Perry, 37, hit the mainstream like a tidal wave. With some of the most popular songs worldwide since her arrival on the scene, it is no wonder that her legacy continues to grow in ever-expansive ways — especially with a new Las Vegas residency.

Always bringing a sense of comedy and eccentricity to her art, she lives to entertain and always seems to be having a good time while doing it!

Enter an ever-dashing knight in shining armor: Orlando Bloom, 45, known for his epic portrayals of heroes, swordsmen and archers in some of the biggest modern-day classics to hit the silver screen.

To say the pair is a power couple is an understatement — and with an engagement and a new child, it’s clear that the duo is thinking of building their empire for the long-term.

But what makes their union so special — and is it meant to last?

Join me as we take a deep dive into their love story because I’m a pop culture astrologer and that’s just what I do!

Katy Perry is the Queen of Camp.Getty Images for Katy Perry

Katy Perry’s birth chart reveals that she is magic incarnate

Katy Perry was born on Oct. 25, 1984. That makes her a Scorpio sun with a Scorpio moon. This also means that she was born on a new moon — which means that, throughout her life, she craves to experience everything possible and is unafraid to start over and go in vast new directions. TBH: the vast majority of her chart is in Scorpio, so when we think of a stereotypical Scorpio, yes, it’s our Queen here. (I personally love Scorpio energy, but that’s just me. I have met her and Orlando before and she just oozes magical energy. HMU sometime and let’s catch a vibe, bb!) Scorpio energy is intense, mystical and deeply passionate — all or nothing in every single way.

Next up, she has some fiery vibes in Sagittarius, giving her a free-spirit and courage to think outside of the box, with some strong Capricorn energy, too, helping her to think big picture with immense ambition.

When it comes to her natal chart, she has a stellium in Scorpio (AKA a ton of planets) and her sun is united with Pluto, which brings her a tremendous innate power to turn her plans and visions into a reality. She commands respect and is willing to put in the work to get there — in a sense, she’s like an ancient sorceress-queen who can command an empire, or you know, just the entire world.

Her moon is united very closely with Saturn, the planet of strength, bringing her an ability to channel her immense emotions into the manifestation of her desires, particularly around building long-term stability, structures and material wealth. While conjunctions (or close unions) in her chart are the predominant aspect — showing that she has an ease in creating synergy between a multitude of talents and parts of her will — the next most notable one is a sextile, which is a supreme angle of harmony that denotes opportunity.

Her sun links with Neptune, making her highly spiritual and creative — a true visionary. Her sun also dances with Jupiter, bringing her tremendous luck, optimism and good fortune. And then her Mercury, ruling her mind, links with Mars, the planet of courage, and Jupiter, too. To say that Perry has a very blessed chart is an understatement. Her natal chart is literally a work of art.

Katy Perry and Orlando Bloom have a soulmate, telepathic connection.Getty Images for Lifetime

Orlando Bloom was born on Jan. 13, 1977. That makes him a tenacious Capricorn sun with a passionate Scorpio moon. From looking at his birth chart, I can see that he has a high predominance of earth and water planetary energy. The peaceful flow between those elements allows him to move fluidly through life, as opposed to feeling like he’s constantly pulled in multiple directions. He can easily use his emotional depths and intuition to manifest practical, real-world results.

Also, when looking at the strongest aspects in his birth chart, I literally chuckled because he has such a joyful and charming demeanor. He, like, his fiancée, has a significant amount of luck and fortune that shine down upon him, helping him to live a very blessed life — filled with ease and serendipity.

His sun links gorgeously with Jupiter, bringing him good spirits and abundant energy. To say a lucky star follows him throughout his life is genuine truth. His natural ability to just casually be irresistible is written all over his chart, too, not only in the way he communicates — in reference to his Mercury linking with Venus — but also his good looks and sense of humor, with his Venus and Mars being in perfect alignment. He’s a natural showman, theatrical, witty and kind.

There are certainly many planetary aspects in his chart that speak of high ambition and a quiet spirituality, but those are more internally expressed and softly indicated — as opposed to Perry, who is much more commanding around those two particular themes. I feel that earlier in his life, his drive for power and recognition were higher, but as he aged, he has hit such significant thresholds that at the end of the day, Bloom is still just a child at heart who wants to have a lot of fun and sex with his beautiful soon to be bride.

The couple has a bright future ahead of them.FilmMagic

Katy Perry, Orlando Bloom: step before me and face my judgment! Don’t worry, I only have nice things to say and I always speak the truth.

So, is our beloved power couple compatible? Y-E-S! In fact, my compatibility rating for them is 9 out of 10. Their sparks are off the chart! This is a rapport that isn’t just special, I genuinely think they have a soulmate bond. (Yes, we have many soulmates in our lifetime, but some of them do stay.)

Let’s start off with how each of their suns is beautifully aligned to the other person’s moon. Oh, and no biggie or anything (I’m being sarcastic — it’s a hella huge deal), but Bloom’s moon is in the exact same place as Perry’s. This often denotes a strong and lasting connection, as they have shared interests, camaraderie and harmony. Romance, trust and cooperation? Yup. Oh, and in case if anyone is wondering, Perry’s energy is the slightly more powerful and intense of the two but, TBH, Bloom probably likes that his queen can take the lead.

The pair also expands one another’s ideas, provides excellent vision and feedback to the other and also easily knows how to bring extreme pleasure, spontaneity and euphoria to the other’s lives. Bloom’s Venus links with Perry’s Jupiter, and when those two planets play, it’s like life is suddenly a theme park.

Oh, and one of my fave parts about their union is how Mars interacts between them. They can set their minds to any goal or endeavor, easily work as a team to foster it and also have mind-blowing sex. So, yes, you can guarantee these two know how to make one another ROAR.

One last thing — I believe that Perry and Bloom also share a telepathic connection, too.

Expect plenty of spice from this power couple!WireImage,

What lies ahead for Katy Perry and Orlando Bloom?

Will our fave power couple make it to the altar and live the life of their dreams — or will there be trouble in paradise? Let’s take a peek.

In 2022, Perry has a particularly gorgeous year around her professional life, creativity and passions. Her Vegas residency is destined to be quite the hit and she will unleash some of her most unique and eccentric designs.

More music ahead? Guaranteed! TBH, I think we can expect some truly brilliant tunes from her in 2022 and 2023 — as she is experiencing powerful eclipses in Scorpio, too. This shows that she will continue to recreate herself and emerge as new versions of herself. When it comes to love — and children — 2022 will also be quite sweet. It is very likely that she and Bloom will find even deeper levels of love for one another, as well.

The thing that is most important to note, though, is that in 2022 and 2023, there will be intense eclipses that take place on the Taurus-Scorpio axis. From just their solar charts, we know that this will bring profound changes to both of their lives. For Perry, this energy activates her sector of marriage and partnership, ensuring that as long as the two can keep fun, sex and communication paramount in their relationship, they’re ensured to tie the knot — and do so in a very big way.

As for Bloom, these eclipses energize his sector of true love and children, showing that he may actually be the one spending a bit more time with the child. There’s also a possibility that this could excite him to want to pursue some personal creative projects of his own, as if awakening his own inner passions. While eclipses in themselves are the wildcards in astrology — bringing destined turning points and events — I hope for the sake of the couple that they tie the knot prior to the eclipses that take place in the second half of 2022. If they don’t, there could be a great deal of turmoil and stormy weather for them to face. Or hey, just hit me up and we can pick out the best day for ya’ll to do so, shall we? Looking forward to it.

Kyle Thomas is a globally recognized pop culture astrologer who has been featured in “Access Hollywood,” E! Entertainment, NBC & ABC television, Cosmopolitan Magazine, Hulu, Bustle, Elite Daily, Marie Claire and more. He is known for his cosmic guidance for celebrities, business executives and prominent influencers. His work harnesses the power of the stars in regards to entertainment lifestyle and trends affecting people worldwide. For more information, visit KyleThomasAstrology.com.