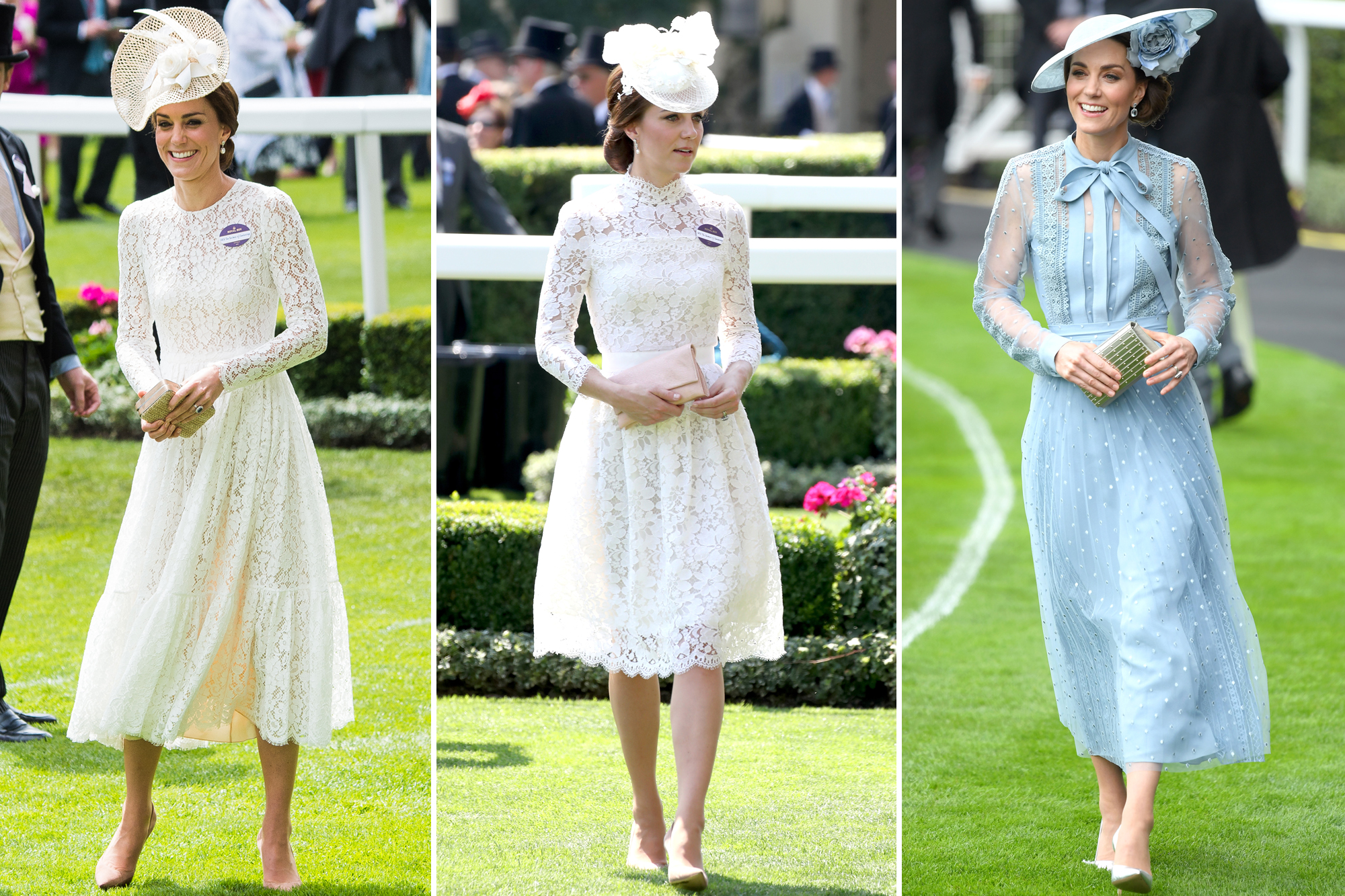 Although Kate Middleton waited until 2016 to finally make her debut at the prestigious racing event, we’ve been treated to some fabulous fascinators and elegant outfits since then.

Unlike noted equestrians Zara Tindall and Princess Anne, the Cambridges aren’t the most horsey of royals — and it’s been rumored that Middleton is actually allergic to the animal — but on the few occasions that we’ve seen the duchess at Royal Ascot, we’ve been treated to some seriously stunning outfits.

From white lace to baby blue bows, we’re taking a look back at Middleton’s best Royal Ascot outfits through the years.

The duchess made her Royal Ascot debut in an elegant white lace midi. WireImage

After Kate Middleton married Prince William in 2011, many wondered why she’d never attended Royal Ascot (her mother, Carole, had even made several appearances). But royal fans were delighted when the duchess made her first Ascot visit in 2016, wearing a white lace dress by Dolce & Gabbana.

The swishy midi featured sheer sleeves and a softly tiered skirt with nude lining, and although it appeared to be new, it turns out she had worn the dress just a month prior.

The duchess had previously layered the frock under a red Zara cape-style coat for the Royal Windsor Horse Show, although the dress was barely visible at the time.

For the Ascot, the royal added pearl drop earrings, a mesh saucer-style hat with white floral accents and a matching clutch by L.K. Bennett.

Middleton, ever a fan of a beige pump, added praline-colored suede heels by Gianvito Rossi to round out her winning first Ascot outfit.

The duchess stuck with white lace for her second trip to the Ascot racecourse.Getty Images

Fashion fans did a double take when the duchess showed up to Royal Ascot the following year in an almost identical white lace look. This time, her dress was by Alexander McQueen, and it did have some clear differences from her 2016 Dolce design.

The piece had a higher, scalloped neckline, a ribbon belt at the waist and a slight peplum. Middleton also chose a shorter length this time around, sticking to the strict Ascot dress code with her just-below-the-knee hemline.

For 2017, she again chose neutral accessories, including a matching white hat with floral details, a tan clutch by Loeffler Randall and the same suede Gianvito Rossi heels.

But the most special part of her outfit ties back to the Queen: Middleton borrowed Her Majesty’s Bahrain pearl and diamond earrings, which she would later wear to the Platinum Jubilee festivities in 2022.

Middleton mixed it up for 2019 in a glamorous blue outfit.WireImage

Her most elegant Royal Ascot look came in the form of a pale blue blouse and skirt set by Elie Saab — in what was to be the duchess’ last appearance at the race for some time, due to the pandemic.

Featuring Swiss dot detailing, a pussy-bow tie at the neck and a sheer bodice over a pale blue tank-style top, the look incorporated a custom version of one of Saab’s resort 2019 collection blouses.

The elegant top was paired with a matching blue midi skirt with the same embroidered dots, and Middleton wore a matching hat by Philip Treacy worn at a jaunty side angle.

Although she chose another pair of Gianvito Rossi pumps for the outing, this time she debuted a new silver pair, adding a metallic Elie Saab clutch and blue topaz and diamond earrings from her go-to jeweler, Kiki McDonough.

Prada Men FW22 Ad Campaign Stars Rami Malek, Jeff Goldblum, and Damson Idris
‘Euphoria’ star Sydney Sweeney’s best bikini moments
We use cookies on our website to give you the most relevant experience by remembering your preferences and repeat visits. By clicking “Accept All”, you consent to the use of ALL the cookies. However, you may visit "Cookie Settings" to provide a controlled consent.
Cookie SettingsAccept All
Manage consent