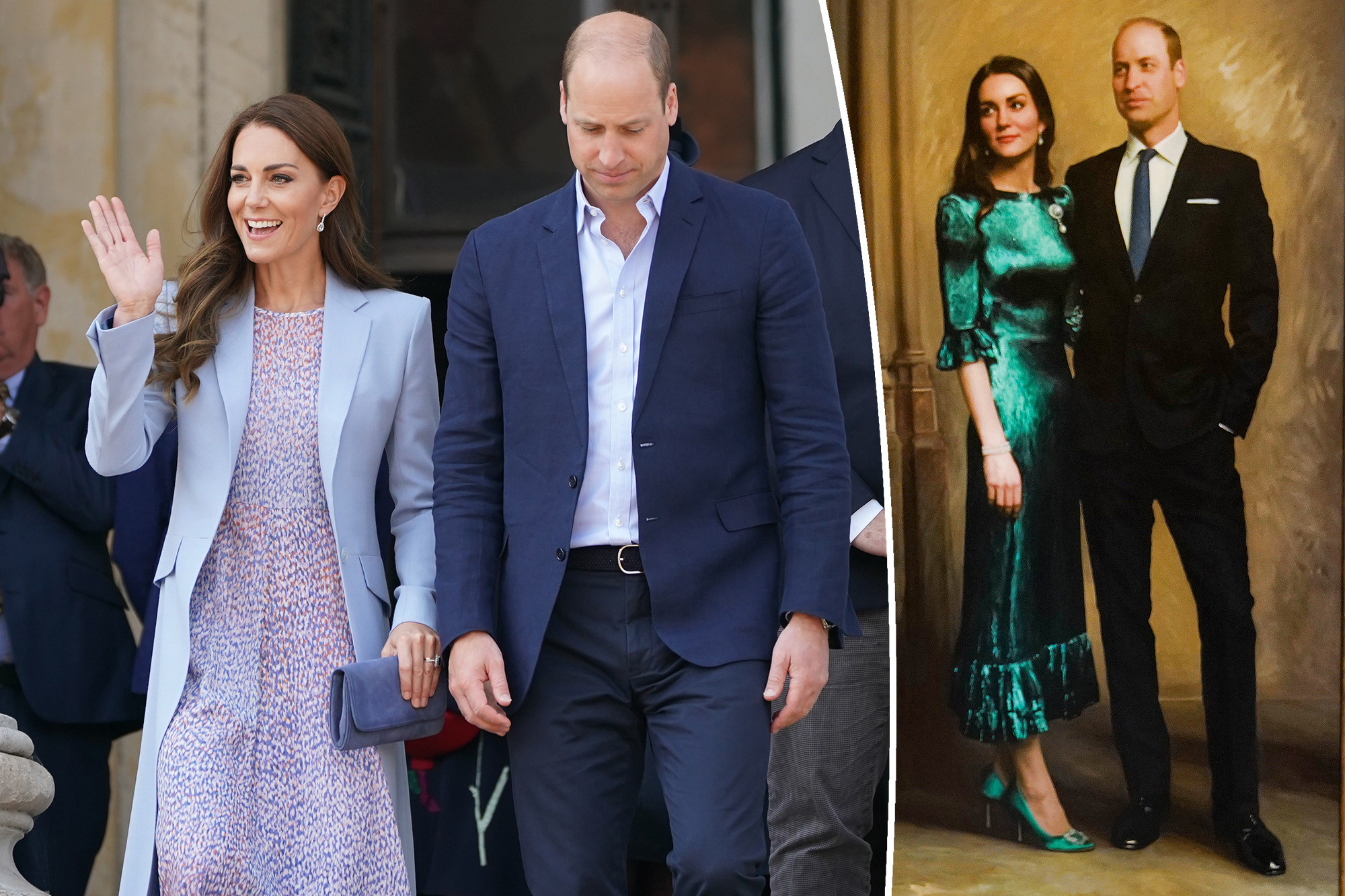 One of Kate Middleton’s favorite dresses will live on forever.

The first-ever joint portrait of the Duke and Duchess of Cambridge was unveiled at a museum in Cambridge, England today — and the duchess chose a familiar outfit with a twist for the historic piece of art.

Dressed in the glittering green dress by The Vampire’s Wife ($2,217) that she previously wore to the Guinness Storehouse in March 2020, Middleton gazes off to the distance as she wraps an arm around Prince William in the glamorous painting.

She gave the old fit a new look with some glittering accessories, including an important loan from the Queen that has a special tie to Cambridge.

According to royal blog The Court Jeweller, the brooch pinned to Middleton’s dress in the painting is actually called “The Duchess of Cambridge’s Brooch.”

The duchess takes a look at the new portrait hanging in Cambridge’s Fitzwilliam Museum today.Getty Images

The pearl-and-diamond piece dates back to the late 1800s and Princess Augusta of Hesse-Kassel, who was married to the Duke of Cambridge at the time, Prince Adolphus. It’s been worn by generations of royal women since — including the current Duchess of Cambridge.

She chose two other significant pieces for her portrait, wearing Princess Diana’s Collingwood pearl drop earrings and three-strand pearl bracelet, both of which Middleton has worn on previous occasions.

The 40-year-old royal made a further fashion statement by wearing the crystal-buckled Manolo Blahnik pumps ($995) made famous by Carrie Bradshaw in “Sex and the City” for her portrait, choosing an emerald shade to match her shimmering frock.

Artist Jamie Coreth poses with his painting of the Cambridges, which he called “the most extraordinary privilege of my life” in a statement.Getty Images

The piece, which was painted by award-winning artist Jamie Coreth, will hang in the Fitzwilliam Museum in Cambridge before moving on to other locations, including London’s National Portrait Gallery in 2023.

To view the special new painting today, Middleton re-wore a pink, purple and blue patterned L.K. Bennett dress ($540) she wore to a 2015 event — although the exact color is no longer sold, it’s now available in both a blue and peach printed version.

She topped the dress with a pale blue coat and added blue-gray accessories for the occasion, sporting yet another color of her favorite Emmy London “Rebecca” heels ($415) and the matching clutch ($370).

The duchess looked pretty in pastels to view the extraordinary portrait.PA Images via Getty Images

Middleton — who serves as royal patron of EACH — rolled up her sleeves and donned a floral-print mask as she engaged with children, taking part in some painting activities and speaking with families of patients.

The duchess had her hand painted by a young girl, Willow Bamber, at EACH’s Milton facility.Getty Images

From viewing a painting of herself to holding a brush, Middleton has had quite the day.

Kim Kardashian, Pete Davidson ‘inject their pimples together’
Ryan Gosling and Margot Robbie match on set of ‘Barbie’ movie
We use cookies on our website to give you the most relevant experience by remembering your preferences and repeat visits. By clicking “Accept All”, you consent to the use of ALL the cookies. However, you may visit "Cookie Settings" to provide a controlled consent.
Cookie SettingsAccept All
Manage consent