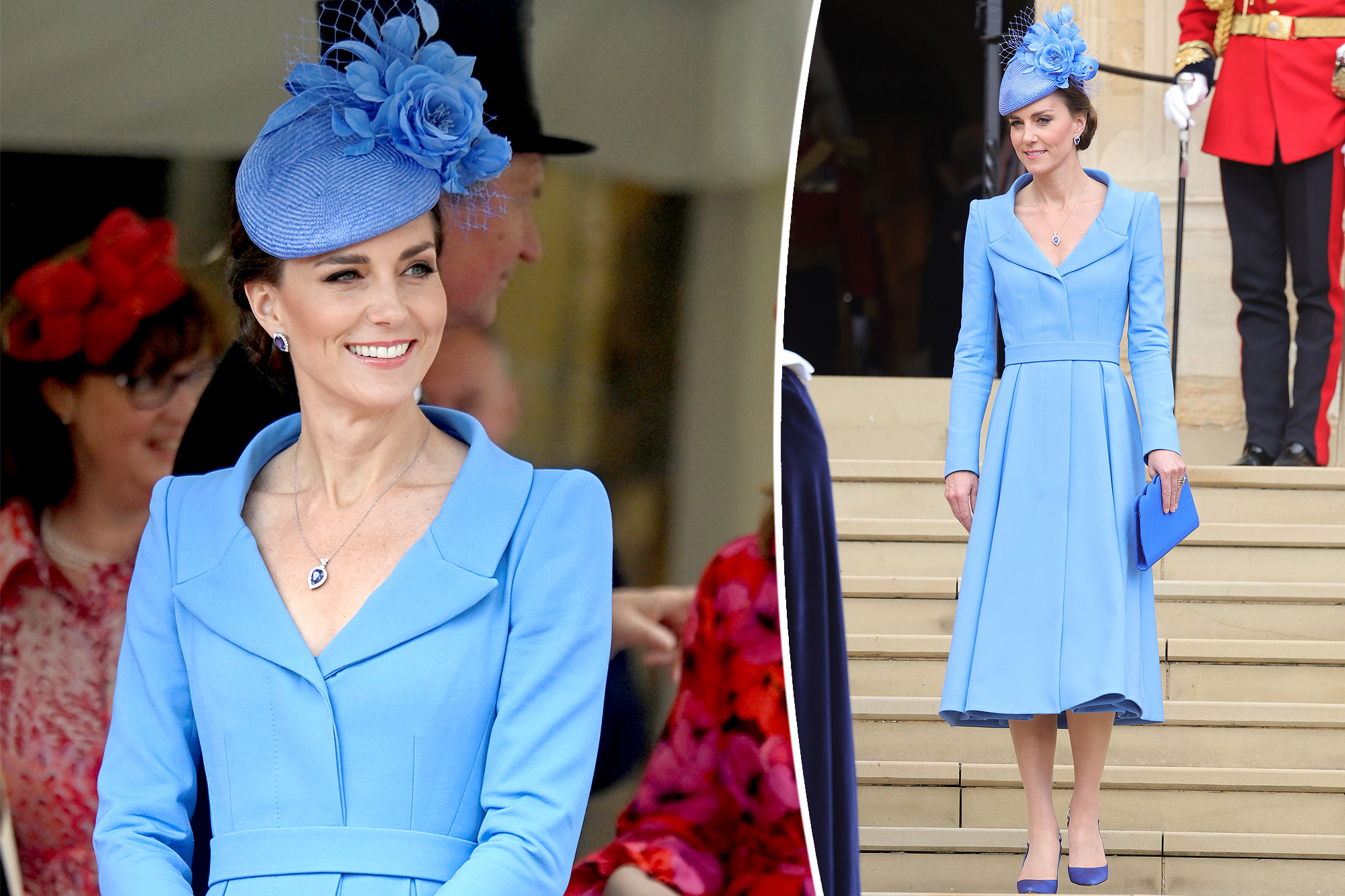 The Duchess of Cambridge was all smiles as she watched Prince William and other members of the royal family join in the Order of the Garter festivities at Windsor Castle today.

Her new periwinkle coat dress by Alexander McQueen is similar in style to several pieces she already owns and features a wide, open collar, built-in belt and full skirt with box pleats.

Middleton, 40, topped off her elegant updo with another fresh piece, wearing a blue fascinator topped with tonal flowers by Juliette Botterill Millinery ($681).

She added a clutch with scalloped trim and some sparkling accessories for the special event, choosing her tanzanite and diamond necklace and earring set by G. Collins & Sons, valued at more than $17,000 in total.

The royal beamed as she watched her family from the sidelines in Windsor. Getty Images

The mom of three kept the glitter going by debuting a stunning pair of bright blue Aquazura heels ($1,095) with a row of crystal links adorning the slingback strap.

Middleton — who wore a range of gorgeous new looks for the Platinum Jubilee — watched the proceedings alongside Sophie, Countess of Wessex, 57, who looked lovely in a bell-sleeved pink dress by Valentino, which she’s worn previously.

The Duchess of Cambridge and Sophie, the Countess of Wessex, coordinated perfectly with their pastel hues.POOL/AFP via Getty Images

Held at Windsor Castle’s St. George’s Chapel, the traditional ceremony dates back to 1348 and is Britain’s oldest and most senior Order of Chivalry.

In addition to the event finally making its return after the pandemic, today was extra special for the royal family as Camilla Parker Bowles was inducted as a Royal Lady of the Order of the Garter.

Prince Charles and the Duchess of Cornwall walked in today’s procession as Camilla was honored as a Royal Lady of the Order of the Garter.Getty Images

Looking stunning in a long, tiered white gown under her traditional velvet robe and plumed hat, Bowles walked alongside her husband, Prince Charles, who is also a knight of the order.

As for the Duchess of Cambridge, this isn’t the first time we’ve seen the royal in a blue coat in recent months; she also wore a similar Catherine Walker dress at the annual Commonwealth Day service at Westminster Abbey in March.

The duchess looked patriotic in blue-and-white as she laughed with local residents at a London street party for the Jubilee.

And, blue is certainly a prominent color in the royal’s closet, as evidenced by the coordinated theme at the Queen’s Platinum Jubilee earlier this month, where Middleton kicked off the celebrations in a navy fascinator and, a few days later, debuted a polka dot dress by Alessandra Rich to attend a street party.

The Cambridges shared some banter during today’s ceremony as Prince William — who was inducted into the order in 2008 — removed his traditional hat. Getty Images

David Beckham spoke about his most unusual hairstyles
Demi Lovato is the latest star to rock the ‘naked dress’ trend
We use cookies on our website to give you the most relevant experience by remembering your preferences and repeat visits. By clicking “Accept All”, you consent to the use of ALL the cookies. However, you may visit "Cookie Settings" to provide a controlled consent.
Cookie SettingsAccept All
Manage consent