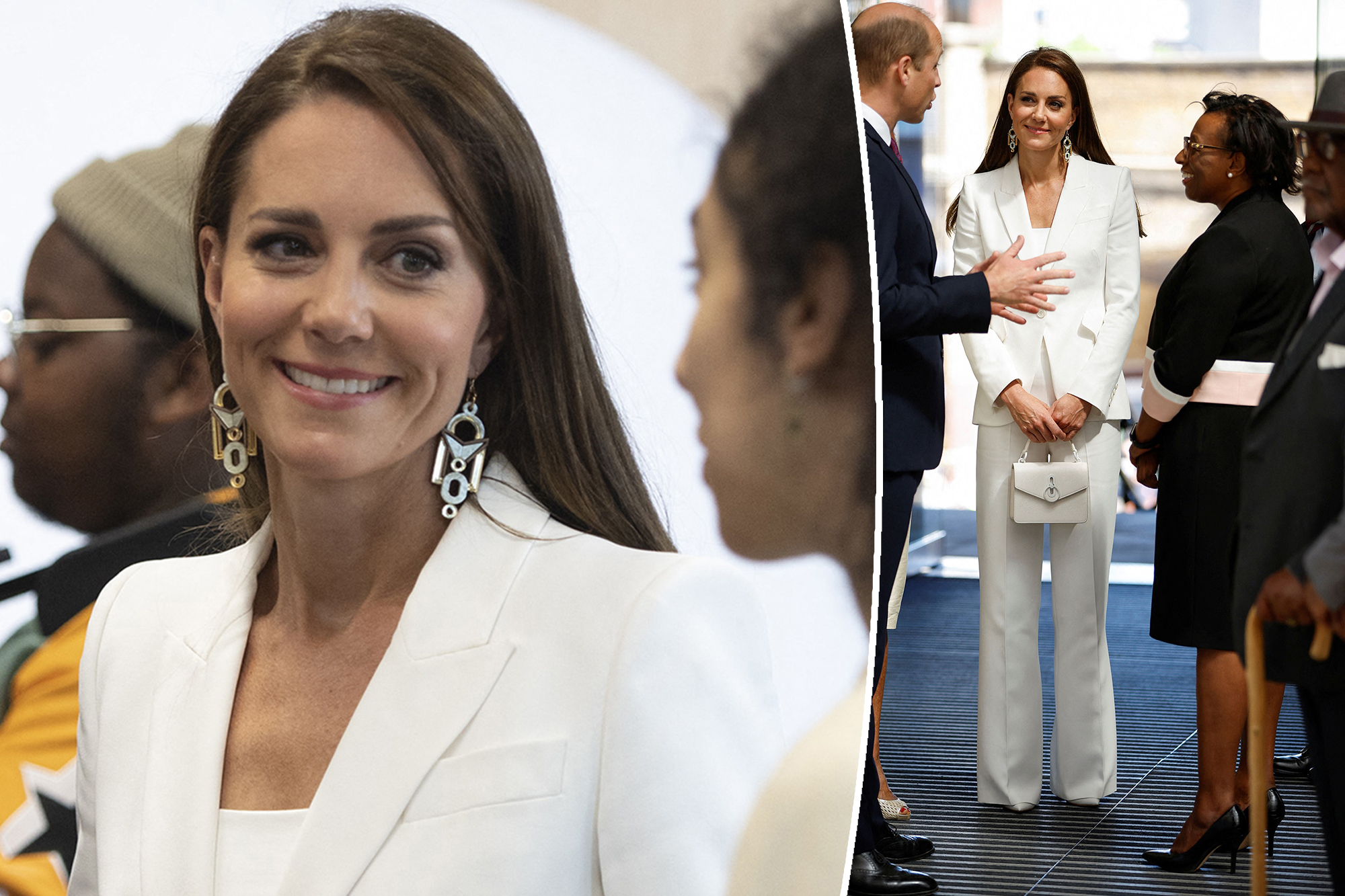 Kate Middleton and Prince William unveiled a special memorial in London today, and as usual, the future Queen Consort made sure to include a thoughtful detail in her wardrobe for the event.

The couple honored Windrush Day, a holiday that marks the arrival of Afro-Caribbean migrants to the UK aboard the Empire Windrush ship in 1948, and honors the continued contributions of immigrants to the British economy.

The royal couple attended two events to mark the occasion, and Middleton, 40, wore a pair of Art Deco-style earrings by Chalk ($85), a black woman-owned business.

The pair is available in both a gold and green colorway, with the duchess appearing to wear the green-toned version.

The duchess chose a striking pair of statement earrings by Chalk for the Windrush Day events.POOL/AFP via Getty Images

The London-based designer behind the brand, Malaika Carr, is also an architect and hand-makes each piece; the collection featuring Middleton’s earrings is based on the design of London’s Royal Opera House, which also has a connection to post-World War II Britain.

Following the war, the theatre reopened in 1946 and became England’s first permanent home for opera and ballet.

“I was blown away seeing HRH in our Florence earrings. The earrings paired with the white suit looked phenomenal,” Carr told Page Six Style.

Middleton often wears an accessory with a symbolic meaning for such events, like the bee-themed hoops she wore to a memorial for the Manchester terror attack anniversary in May.

While the white Alexander McQueen trouser suit the duchess wore looks very similar to the outfit she wore in Jamaica this spring, she actually chose a different pair of trousers to go with the label’s single-breasted suiting blazer ($1,995) this time — sporting a wide-legged style ($1,450) instead of the straight-fit pair she wore in the Caribbean.

She went completely tonal with the rest of her accessories, adding white pointed-toe pumps and a go-to white Mulberry bag.

The royal held a camera as she got involved in a workshop along with the help of a young student. Getty Images

To celebrate the Windrush anniversary, Middleton and Prince William visited Elevate, a youth organization that works with the British-Caribbean community and other diasporas to help build skills in the creative and cultural arenas.

After joining in with students for a filming and editing workshop, the royals moved on to officially unveil the National Windrush Monument at London’s Waterloo Station.

The duke and duchess posed with Baroness Floella Benjamin, Windrush passengers Alford Gardner and John Richards and children next to the new memorial — designed by Jamaican artist Basil Watson.Getty Images

The statue features a man, woman and child holding hands standing on stacked luggage and according to Kensington Palace, “symbolises the courage, commitment andresilience” of the Caribbean migrants who started new lives in the UK between 1948 and 1971.

Today’s outing marks the second time Middleton has stepped out in an Alexander McQueen trouser suit in recent days; she wore a pink version of the outfit for a roundtable discussion with government officials last week.

Ryan Gosling and Margot Robbie match on set of ‘Barbie’ movie
Heidi Klum’s daughter Leni, 18, kicks back in pink bikini
We use cookies on our website to give you the most relevant experience by remembering your preferences and repeat visits. By clicking “Accept All”, you consent to the use of ALL the cookies. However, you may visit "Cookie Settings" to provide a controlled consent.
Cookie SettingsAccept All
Manage consent