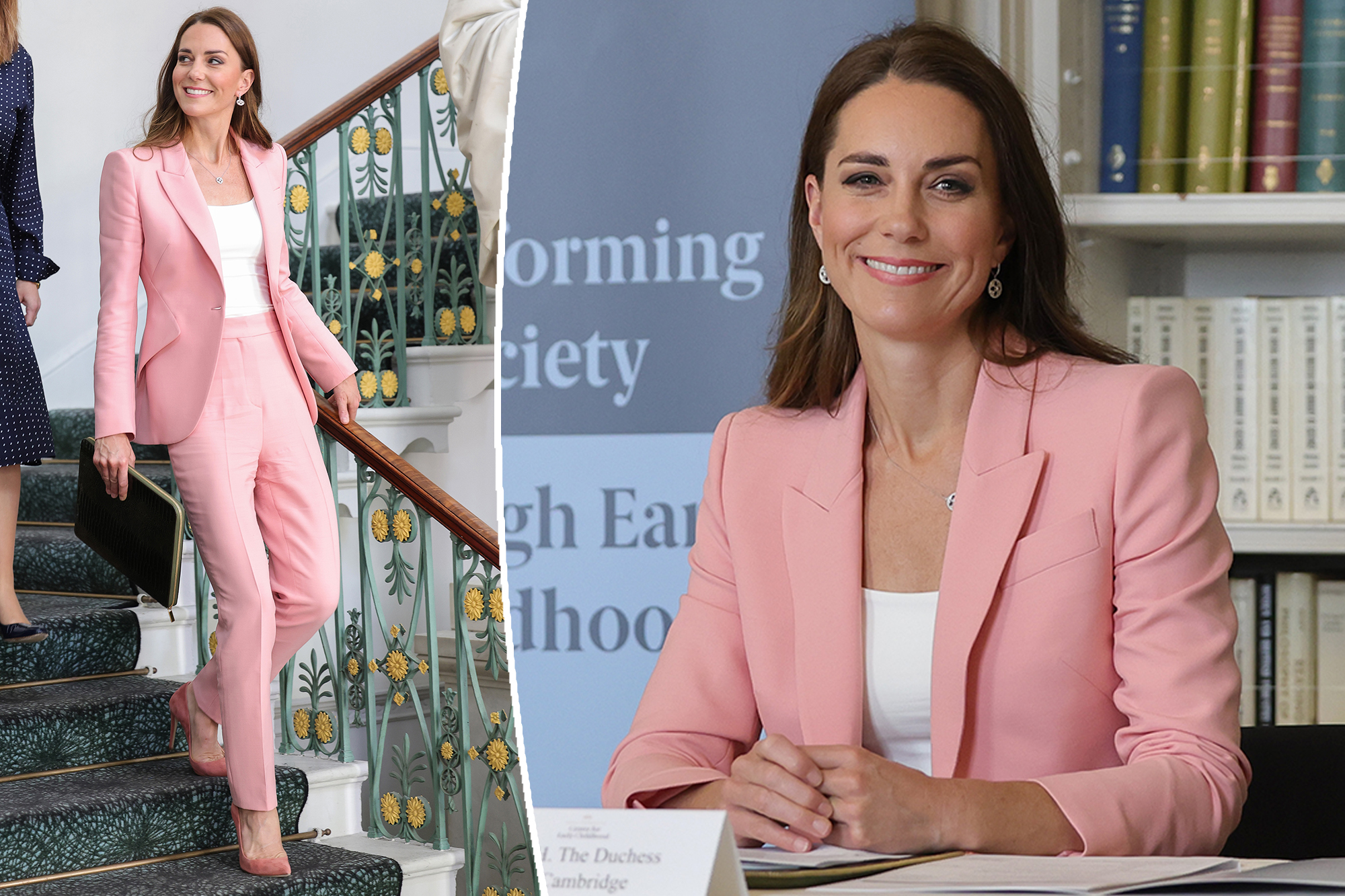 On Thursdays, we wear pink.

The Duchess of Cambridge sported a pale pink trouser suit while attending a roundtable with British government officials on behalf of her Royal Foundation Centre for Early Childhood today.

She paired her outfit with a simple white top and Emmy London pumps ($410).

The duchess added some dazzle with an old favorite necklace and earrings by Mappin and Webb, wearing the brand’s “Empress” diamond earrings ($2,147) and pendant ($2,450).

The royal launched her Centre for Early Childhood in June 2021, marking her dedication to working on improving early childhood health and education.Getty Images

She ditched her usual clutch bag for the event, carrying a leather folder as she got down to business.

If today’s ensemble looks familiar, Middleton debuted a white version of the same outfit on her Caribbean tour this spring while visiting Jamaica.

During the meeting — which was attended by top officials like the UK’s Secretary of State for Health, Sajid Javid, and the Minister for Families, Will Quince — the duchess reviewed new research by her foundation about the significance the first five years of childhood holds on lifelong outcomes.

As for her outfit, we’ve seen a similar style on the duchess in the past when she wore a darker rose-colored Marks and Spencer jacket and trousers for a visit to healthcare workers at the start of the pandemic in March 2020.

The Duchess of Cambridge wore an affordable pink suit as she chatted with staff at the London Ambulance Service in March 2020.MEGA

She doesn’t just stick to pink when it comes to colorful trouser sets; Middleton also rocked a purple power suit by Emilia Wickstead back in 2021.

Today’s appearance follows the Cambridges attending a memorial event for the 72 victims of the 2017 Grenfell Tower fire yesterday.

The duke and duchess took part in a wreath-laying ceremony for the five-year anniversary of the tragedy, with Middleton recycling a white button-front dress by Suzannah ($2,900) for the solemn event.

Kourtney Kardashian helped Travis dress better
Miranda Kerr talks ‘healthy’ influence on husband Evan Spiegel
We use cookies on our website to give you the most relevant experience by remembering your preferences and repeat visits. By clicking “Accept All”, you consent to the use of ALL the cookies. However, you may visit "Cookie Settings" to provide a controlled consent.
Cookie SettingsAccept All
Manage consent