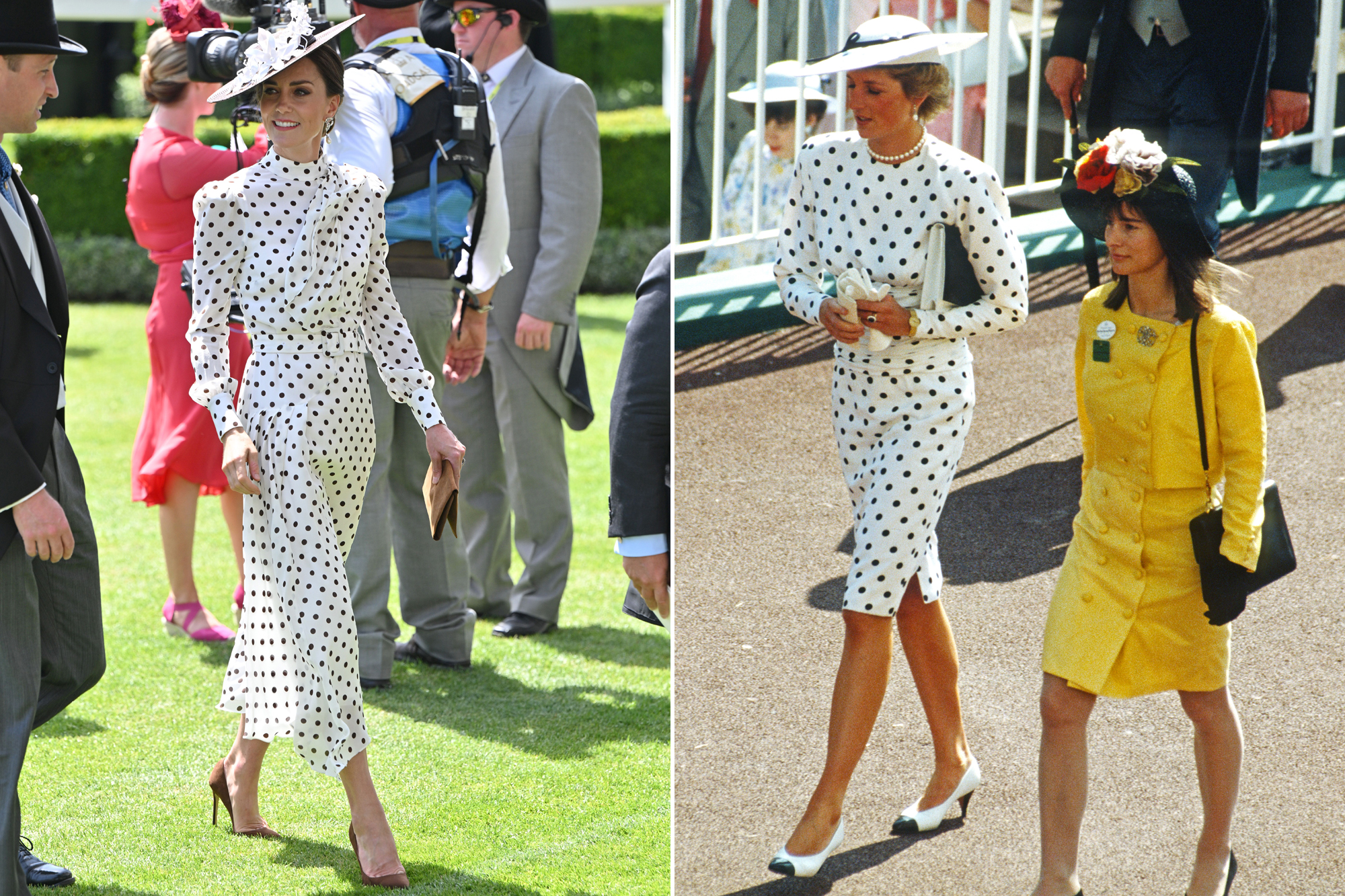 Making only her fourth appearance ever at the famous horse race, the Duchess of Cambridge, 40, channeled her late mother-in-law, who wore a similar dotted style by Victor Edelstein to the same event in 1988.

She further paid tribute to Diana by wearing the late Princess of Wales’ stunning diamond and pearl drop earrings.

Middleton’s high-necked silk design with puffed sleeves and a dramatic shoulder ruffle is an older style that originally retailed for $2,520 and was described as “inspired by ’80s yacht club culture.”

Although temperatures soared in Ascot, England, the duchess appeared unfazed by the heat in her long-sleeved, midi-length dress as she chatted with racegoers.

While Diana chose a polka dot hat and navy-and-white pumps for her Royal Ascot outing, her daughter-in-law wore a solid brown topper with white flowers along with chocolate suede pumps by Gianvito Rossi ($725) and a matching clutch.

She wore her hair in an elegant updo, showing off Diana’s earrings, which Middleton previously wore to the 2019 BAFTAs in London.

Princess Diana sported the sparkling earrings (worn with a slightly larger pearl drop) during a visit to Korea in 1992.Gamma-Rapho via Getty Images

Middleton appears to be a fan of Alessandra Rich’s spots; she wore a black dotted version of the style (along with a different pair of Diana’s pearls) to Prince Philip’s memorial in March, with the same high neck and buttons along the shoulder.

This wasn’t the only twinning moment at Royal Ascot this week; Carole Middleton made an appearance at the race on Tuesday wearing a dress from her daughter’s closet.

The duchess was all smiles at Royal Ascot today, despite the high temperatures.PA Images via Getty Images

Pete Davidson passed Kim Kardashian’s ‘boyfriend test’ while on vacation in the tropics
Kristin Cavallari spills her everyday fashion and beauty essentials
We use cookies on our website to give you the most relevant experience by remembering your preferences and repeat visits. By clicking “Accept All”, you consent to the use of ALL the cookies. However, you may visit "Cookie Settings" to provide a controlled consent.
Cookie SettingsAccept All
Manage consent