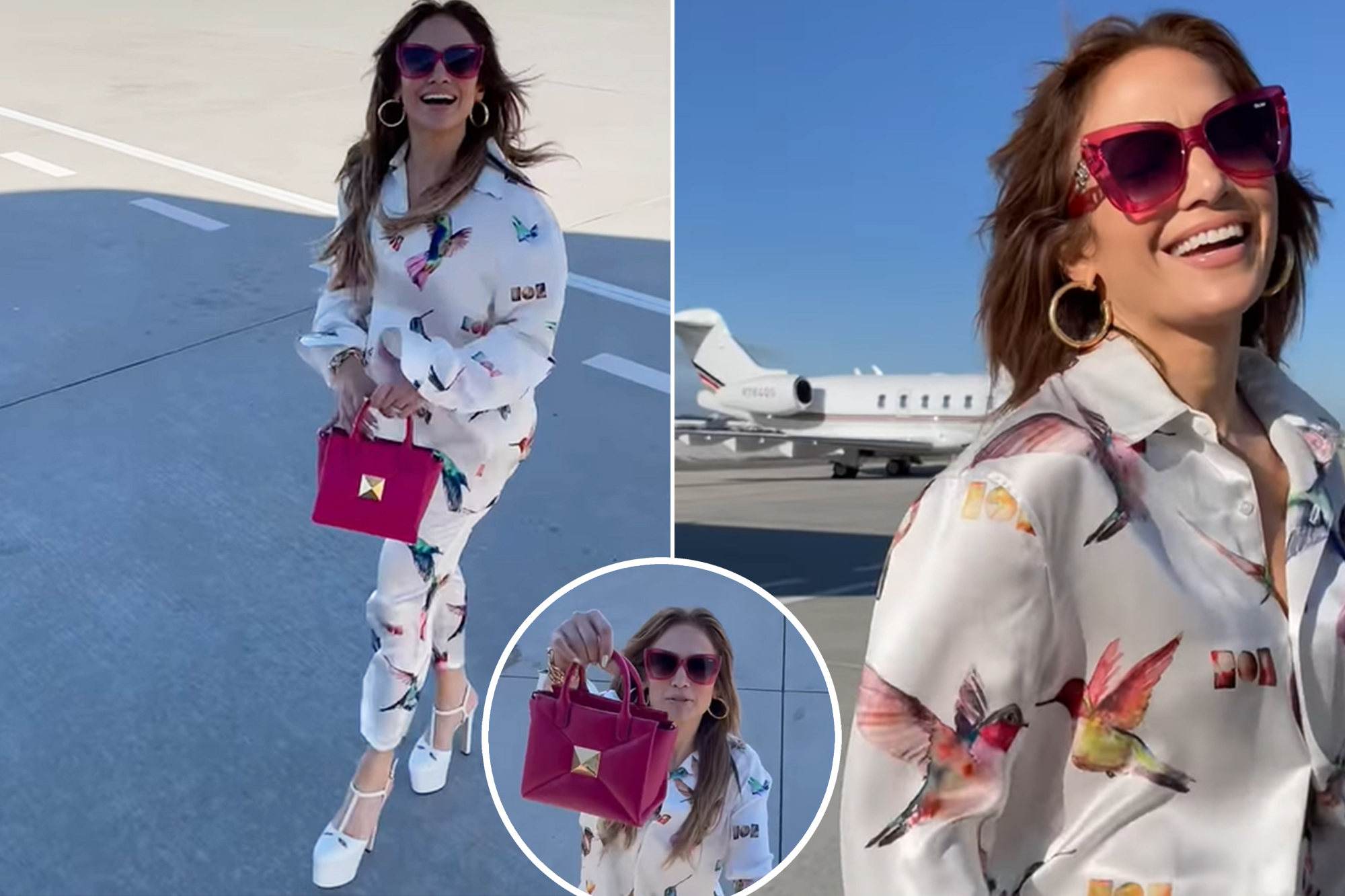 Leave it to J.Lo to make pajamas a (literal) runway moment.

While most of us go for comfy traveling clothes, Jennifer Lopez took it to the next level as she boarded a private plane in style on Sunday wearing a pair of pajamas priced at north of $1,500.

Taking fans along for the ride in an Instagram Reel, the future bride was all smiles as she walked across the tarmac in a pair of men’s silk hummingbird-print pajamas by Nahmias and six-inch Gucci platform heels as Jack Harlow’s “First Class” played in the background.

The actress beamed as she showed off her pink shades and gold hoops in the video.jenniferlopez/Instagram

This marks the second time in recent months we’ve seen Lopez, 52, wear pajamas as streetwear; back in May, she was spotted in Los Angeles wearing a white Dôen nightgown as a dress.

The singer also made sure to hold up her hot pink Valentino “One Stud” crossbody bag ($2,800) to the camera as she climbed the stairs to the glamorous plane.

Lopez gave fans a closer look at her Valentino bag in the Reel.jenniferlopez/Instagram

While she rocked pricey designer accessories with her high-end pajamas, the “Ain’t It Funny” songstress teamed the look with a surprisingly affordable pair of shades: a $65 pink style by Australian label Quay.

The sunnies are part of the brand’s “Love Island” collaboration and feature gold link detail at the sides — and if pink isn’t your thing, they’re also available in pearl, tortoise and black.

The “Marry Me” star is a big fan of the affordable brand; back in 2019, Lopez starred in an ad campaign for the sunglasses company along with then-fiancé Alex Rodriguez.

As for her current beau, she praised him as part of a Father’s Day message in her “On the J.Lo” newsletter, calling Ben Affleck “affectionate and engaged in every moment” with their blended family.

Hailey Bieber sued for trademark infringement over Rhode skincare
Julia Fox updates mom’s bikini with St. Marks Place piercing
We use cookies on our website to give you the most relevant experience by remembering your preferences and repeat visits. By clicking “Accept All”, you consent to the use of ALL the cookies. However, you may visit "Cookie Settings" to provide a controlled consent.
Cookie SettingsAccept All
Manage consent