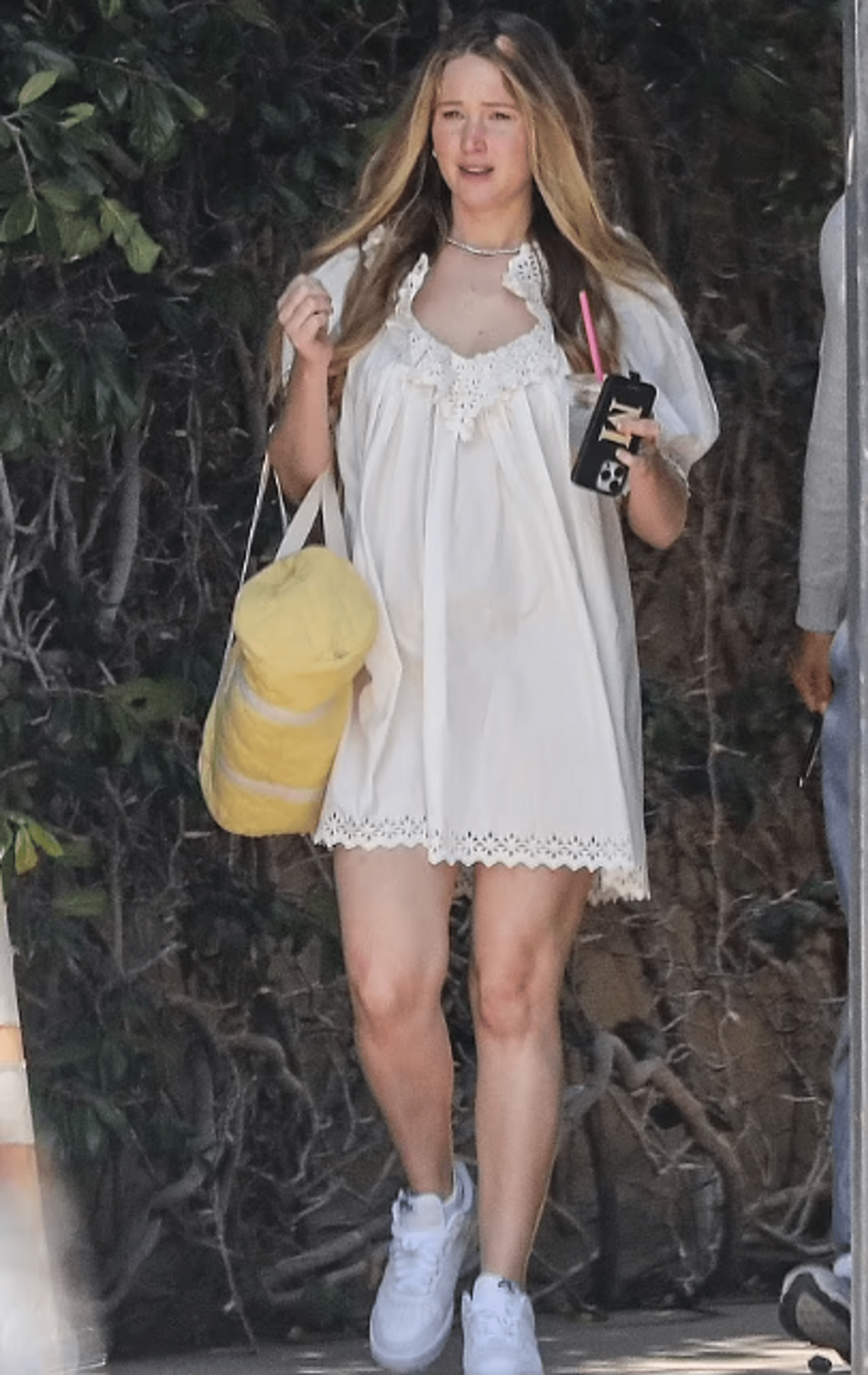 And apparently, the star feels excellent without them. After the birth of her first child, the 31-year-old actress became a mother in February 2022; Jennifer Lawrence is increasingly appearing at social events. Still, her beauty looks are as simple as possible: a minimum of makeup and no complicated styling. So in ordinary life, the actress prefers to go without makeup and with a careless hairstyle, that is, with loose hair. Nevertheless, it was such a beautiful look that the star of the movie “Don’t Look Up” and ” The Hunger Games ” recently walked the streets of Santa Monica, California. When the paparazzi photographed her, she looked great. The Oscar-winning actress wore a white short babydoll dress with puffed sleeves and beautiful ruffles around the neck, white sneakers, and sunglasses, and she complemented the look with small earrings and a beaded choker. There were two bags on Jennifer’s shoulder: one was a sports “keg,” and the other was a tote. An insider close to Lawrence Cooke Maroney’s family told People that the actress is thrilled and enjoying her role as a mother. According to him, everything in Jennifer’s life turned out the way she wanted, so the actress now prefers to spend time at home with her family and not at social events. This opinion was confirmed by Ellen DeGeneres, who, on one of the show’s last episodes, had a video call with the actress when she finally revealed the secret of the sex of her child. At the end of February, Jennifer gave birth to a boy. The presenter said that she used to live in the house where Lawrence and Maroni and their son now settled, and then she moved to the house next door. She watches with great pleasure how a young mother communicates with a child, which is very sweet.

Megan Fox, on a date with her fiance, Machine Gun Kelly, shows how to combine trendy jeans and a crop top
Beyoncé shared a new photo and showed how to wear a figure-shaped dress this summer
We use cookies on our website to give you the most relevant experience by remembering your preferences and repeat visits. By clicking “Accept All”, you consent to the use of ALL the cookies. However, you may visit "Cookie Settings" to provide a controlled consent.
Cookie SettingsAccept All
Manage consent