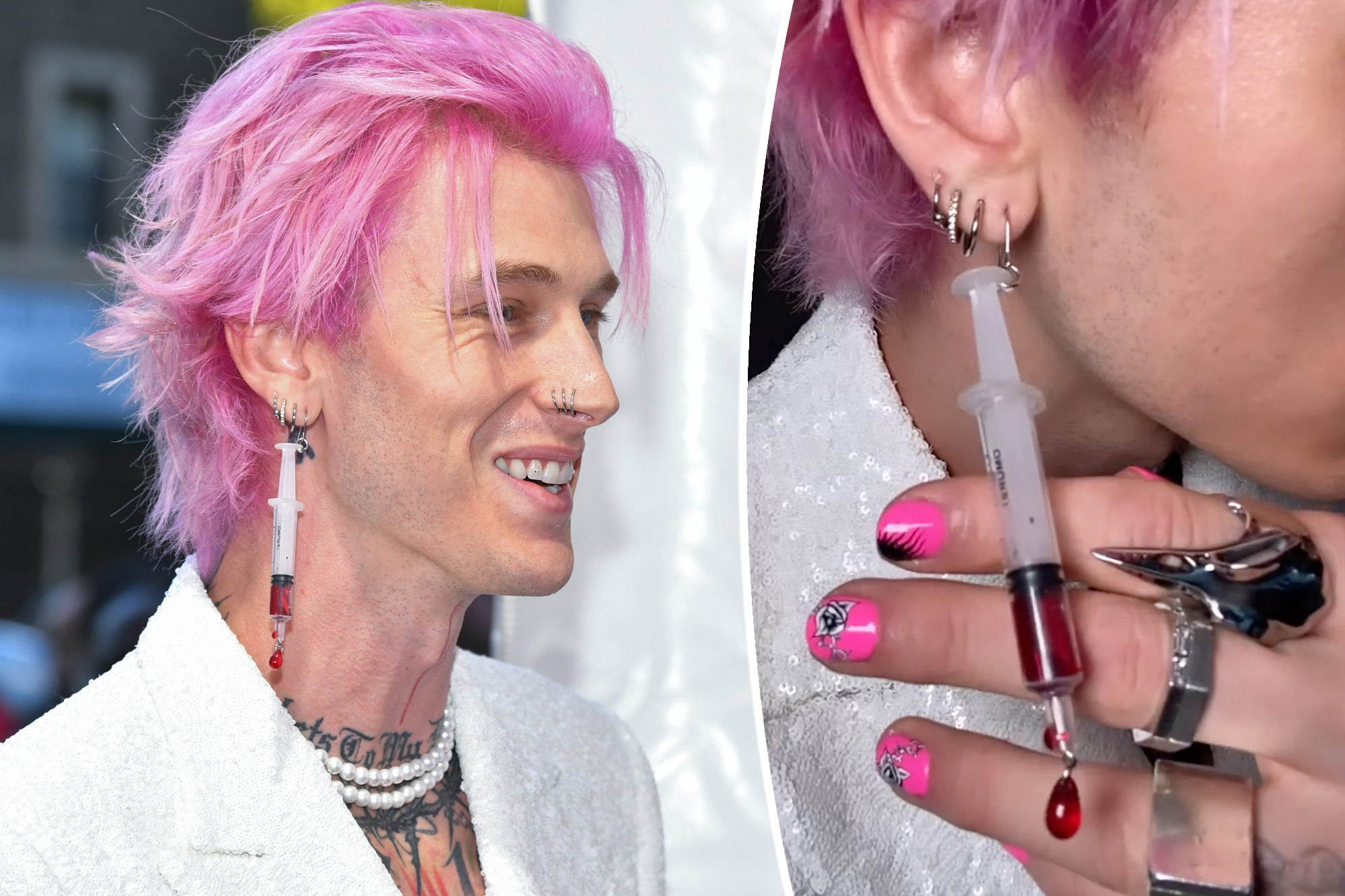 There’s blood on the carpet.

Machine Gun Kelly shocked fans by wearing what appeared to be a blood-filled syringe as an earring to the premiere of his new film, “Taurus,” on Thursday.

“Devil’s in the details,” MGK, 32, captioned a photo displaying the bloody bauble, which even included a ruby red droplet at the tip.

The rocker paired the head-turning piece with a white double-breasted Dolce & Gabbana suit, cream-colored high tops and two strands of pearls, along with bright pink hair and a matching manicure.

His fiancée Megan Fox wore a glossy, red-hot Sportmax dress — to match her man’s earring, perhaps? — and joined him to pose for photos as well as partake in a discussion on the film, which premiered during New York’s 2022 Tribeca Film Festival.

He proudly showed off the accessory on Instagram. machinegunkelly/Instagram

This isn’t the first time MGK has used blood as an accessory. In February 2021, the artist, whose real name Colson Baker, shared that he was wearing Fox’s DNA in a pendant around his neck.

He later revealed that the “Transformers” actress had gifted him a drop of her blood to wear in a necklace when she was traveling.

“Some people give, like, a handkerchief to their partner or whatever. She gave me her DNA,” he said at the time.

The singer rocked an all-white suit and no shirt for the event. WireImage

The concept of blood seems to have significance for the pair. In April, 36-year-old Fox shared that she and MGK drink each other’s blood “for ritual purposes.”

“It is controlled where it’s like, ‘Let’s shed a few drops of blood and each drink it.’ He’s much more haphazard and hectic and chaotic, where he’s willing to just cut his chest open with broken glass and be like, ‘Take my soul,’” she told Glamour UK at the time.

Kelly and Fox got engaged in January, and sealed the deal by — surprise! — sipping each other’s blood, per the actress.

He was joined by his fiancée Megan Fox. Getty Images for Tribeca Festiva

The couple confirmed their relationship in June 2020 after sparking dating rumors for months prior.

Why Hailey and Justin Bieber are the best at playing 90s fashion
Tori Spelling spotlights daughter Stella’s makeup skills
We use cookies on our website to give you the most relevant experience by remembering your preferences and repeat visits. By clicking “Accept All”, you consent to the use of ALL the cookies. However, you may visit "Cookie Settings" to provide a controlled consent.
Cookie SettingsAccept All
Manage consent