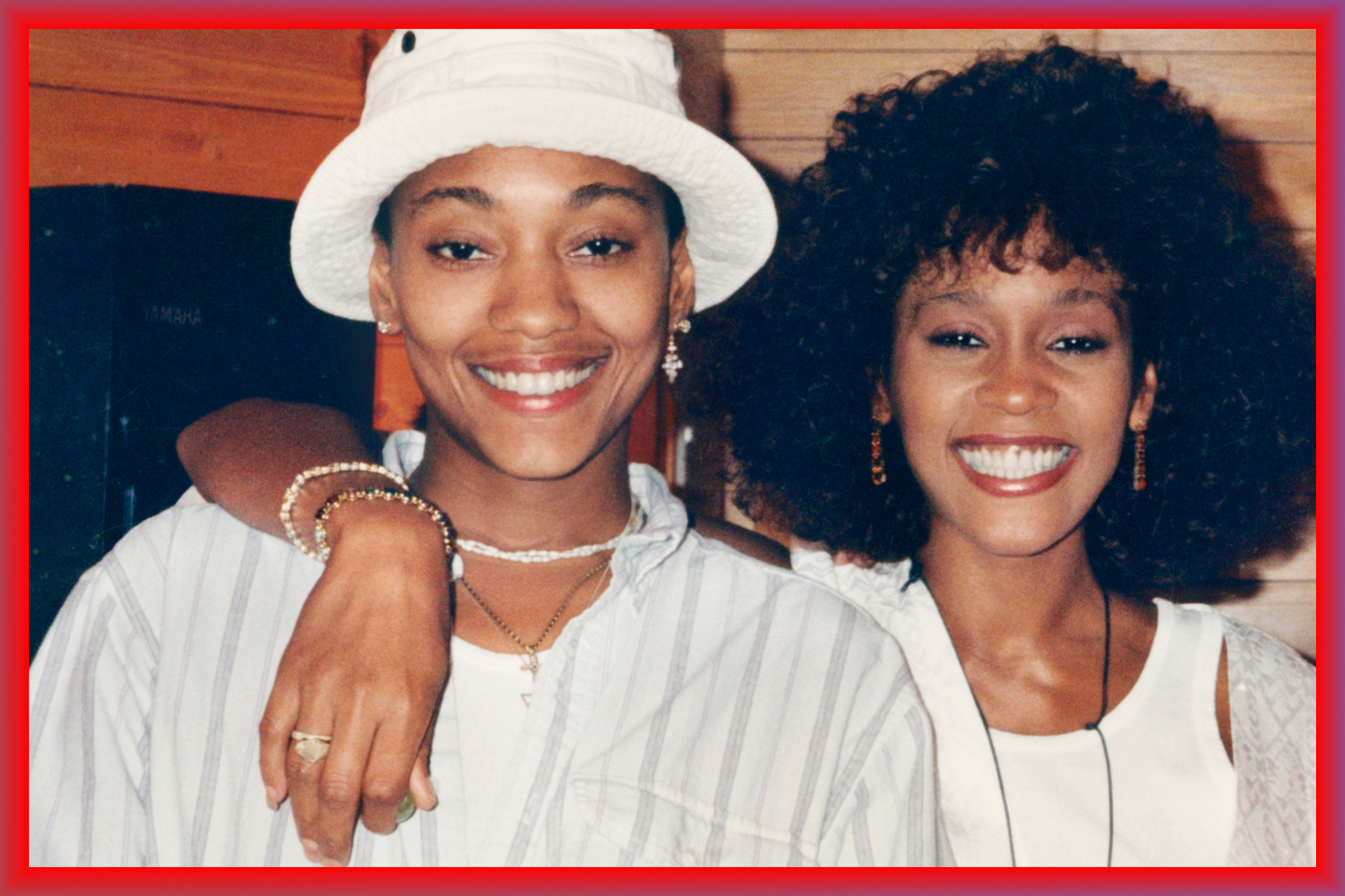 Whitney Houston was the perfect face for the MTV-dominated 1980s, “a glamorous showgirl shaped by a Svengali” – the powerful Arista Records producer Clive Davis.

But she also possessed a deep, dark secret: she was a closeted lesbian, writes author Gerrick Kennedy in his new book, “Didn’t We Almost Have It All: In Defense of Whitney Houston” (Abrams Press), out Tuesday.

Feeling pressure to conform to her strict religious upbringing and the norms of the time, Whitney hid her sexuality from the public till her tragic death, which happened 10 years ago this week.

“Because her music didn’t fit squarely in the boxes expected of a Black girl making music in the ’80s, she was seen as not Black enough. She was ridiculed. Brandished ‘Whitey’ — and endured endless speculation on her sexuality,” the author notes.

Raised in Newark, NJ, Whitney was under the thumb of her mother, Cissy, a devout church member of Newark’s New Hope Baptist Church and a member of the gospel singing clan, the Drinkard Sisters.

Houston was at the top of her game in 2009 (above) — but behind the scenes she was battling multiple demons.Getty Images

The Drinkards played the “Chitlin’ Circuit,” performing at black venues throughout the South. Cissy was a star in her own right — singing backup to the King himself, Elvis Presley, and Aretha Franklin, the Queen of Soul.

Even as a little girl, Whitney felt different. She was a tomboy and bristled at wearing the frilly clothes and hair ribbons chosen by her mother. She preferred jeans, t-shirts and running track with her two older brothers, Gary and Michael.

Whitney Houston’s mother, Cissy, made her hide her budding lesbian sexuality, according to a new book.

The three children floated between the homes of relatives when the parents were working and Cissy was on the road. Soon, Whitney was swept up in Cissy’s all-consuming desire to push her into the singing business.

“Cissy knew Whitney was destined for greatness and she could get her there. She rode her hard at church and encouraged her little girl to sing along to the records she and Aretha made. She didn’t take no shit,” Kennedy writes.

Raised in Newark, NJ, Whitney was under the thumb of her mother, a devout member of Newark’s New Hope Baptist Church.

Cissy’s solo career didn’t take off and although she was in demand as a backup singer, the recording industry was fickle. Whitney’s cousin, chart topping R&B singer Dionne Warwick, also helped encourage the young girl’s vocal talent, viewed as the family’s ticket out of poverty.

At the same time, Whitney was exploring her identity. In the summer of 1980, when she was 17, she introduced herself to a stunning, slender 19-year-old, Robyn Crawford, when they were both working as youth counselors at the East Orange Community Center in NJ.

“It was a bond that formed almost immediately, and they were inseparable that summer. If you saw one, you saw the other,” writes Kennedy.

Crawford, Whitney’s first close friend, confidante and companion outside of her brothers, had Whitney’s back and was “unyieldingly loyal.”

With Crawford, Houston could be the tomboy who preferred smoking Newports, getting high and cursing.

An undated photo of Houston with a group of friends including Robyn Crawford (front row, in hat), Houston’s personal assistant and secret lover.INFphoto.com

In the Houston living room that same year, Whitney and Robyn came together. “Their lips met, bound by all that had been unspoken between the two. That first kiss was long, warm like honey,” Kennedy writes.

“It was free and honest – loving and tender,” Robyn wrote in her 2019 memoir, “A Song For You: My Life With Whitney Houston,” after decades of silence. “We both wanted to touch and explore each other, and we did until we fell asleep in each other’s arms.”

Together that summer, they sunbathed at the Jersey Shore, went to gay clubs, and made out in a rental car before being told to move along by a cop.

“They were partners in a traditional sense but never had a real conversation about labels — lesbian, gay, bisexual, girlfriend,” Kennedy writes.

Robyn Crawford (left) and Houston at a function in 1988. Their constant closeness set tongues wagging, but Houston never came out of the closet.Getty Images

“We were friends. We were lovers. We were everything to each other. We weren’t falling in love. We just were. We were one: that’s how it felt,” Robyn wrote in her book.

In bed, they plotted songs Whitney would sing — and their future.

In that same summer of 1980, they got an apartment together and Whitney promised to take Robyn wherever she was headed, Kennedy writes.

But when whispers of the girl-girl relationship reached Cissy’s ear, she had a fit and tried to keep the two from even walking next to each other in public.

‘We were friends. We were lovers. We were everything to each other.’Robyn Crawford, on her relationship with Whitney Houston

The church and the record industry were both so homophobic, Whitney knew the affair had to end when Clive Davis gave her a record deal. She broke the news to Robyn.

“You know how I feel about you and we will always have that,” Whitney told her sweetheart, Kennedy writes.

Houston and Crawford in 2017. Crawford kept quiet about her relationship with the singer until several years after her death.

The love affair with Robyn was over the summer it began but Whitney made her an executive assistant — “a role that expanded over time,” Kennedy writes.

That role did nothing to quiet the rumors. When Whitney wanted to fly Robyn out to join her at a black radio convention in 1985, radio DJs and the tabloids caught wind of it — and the chatter was deafening.

“Was she gay?” they wanted to know.

“The public concluded that Whitney was a closet lesbian and she and Robyn were star-crossed lovers doomed by the oppression of society and Whitney’s religious family,” Kennedy writes.

When the Washington Post asked the singer about the nature of her friendship with Robyn, she snapped, “She is now my employee but we’re still the best of friends.”

Houston performing on stage during the 2004 World Music Awards. Eight years later, her life came to a tragic end.Getty Images

Whitney eventually turned to Bobby Brown, a singer from the projects of Roxbury, Mass., who liked the funk of James Brown and Earth, Wind and Fire, and formed a group called New Edition. His “loud, ghetto fabulous” black music made him an R&B king and girls threw their panties at him on stage.

Their partnership made sense: Bobby needed to class up his bad boy image and Whitney needed to escape the gay rumors. They tied the knot in 1992.

“White America looked at Whitney and Bobby and saw a pop princess and an R&B thug…The princess and the frog, that’s how we talked about their relationship. That’s the image that lingered for the entirety of their 15-year marriage,” Kennedy writes.

Once considered America’s sweetheart, Houston sings the National Anthem during the pregame show at Super Bowl XXV in 1991.Getty Images

And yet, four years after they wed, Katie Couric asked Whitney about Robyn and the gay rumors once again. This time, she responded awkwardly.

“This wasn’t her world,” she said of Robyn. “I brought her into this madness. She goes, ‘Why am I the target? What did I do?’

“I said, ‘You’re my friend…You play basketball. They think you’re a man.’

“She’s a damn good basketball player. She can beat any guy there is. I love it,” laughing nervously.

Houston with husband Bobby Brown and their infant daughter Bobbi Kristina, who died three years after her mother.Getty Images

For 15 years, Robyn stayed close by as Whitney’s executive assistant and friend.

It was Robyn who went to Cissy worried about Whitney’s cocaine addiction back in the ’80s. Cissy confronted Whitney who brushed it off and told her mother Robyn was just overreacting.

But her drug abuse was rampant and spiraling out of control.

On February 11, 2012, at age 48, the star was found face down in a water-filled bathtub at the Beverly Hilton Hotel.

The forensic toxicologist reported at the time she was “acutely intoxicated from cocaine.”

Seeing the bruise on Whitney’s left forehead, forensic pathologist Cyril Wecht believed it was an accidental drowning and “this lady fell into the water, she was unconscious, dead or dying when she fell into the tub.”

At the time of her death, a brown wig was tightly affixed to her head and she was wearing dentures. (Tooth decay is common among habitual drug abusers.)

Robyn, now 61, didn’t speak about her romantic history with Whitney for nearly 40 years until she published her memoir.

Eventually, she found stability with Lisa Hintelmann, 49, an executive director at a talent search firm. They married and later adopted twins.

“I realized that I needed to save myself,” Robyn wrote in her memoir.

Of her time with Whitney, she said, “Yes, in the end it was tragic, but the dream and the rise were beautiful. I owe it to my friend to share her story, my story. Our story. And I hope that in doing so, I can set us free.”

‘1883’ star Amanda Jaros finding fame in filth of ‘Yellowstone’ prequel
25 famous people born under the water sign
We use cookies on our website to give you the most relevant experience by remembering your preferences and repeat visits. By clicking “Accept All”, you consent to the use of ALL the cookies. However, you may visit "Cookie Settings" to provide a controlled consent.
Cookie SettingsAccept All
Manage consent