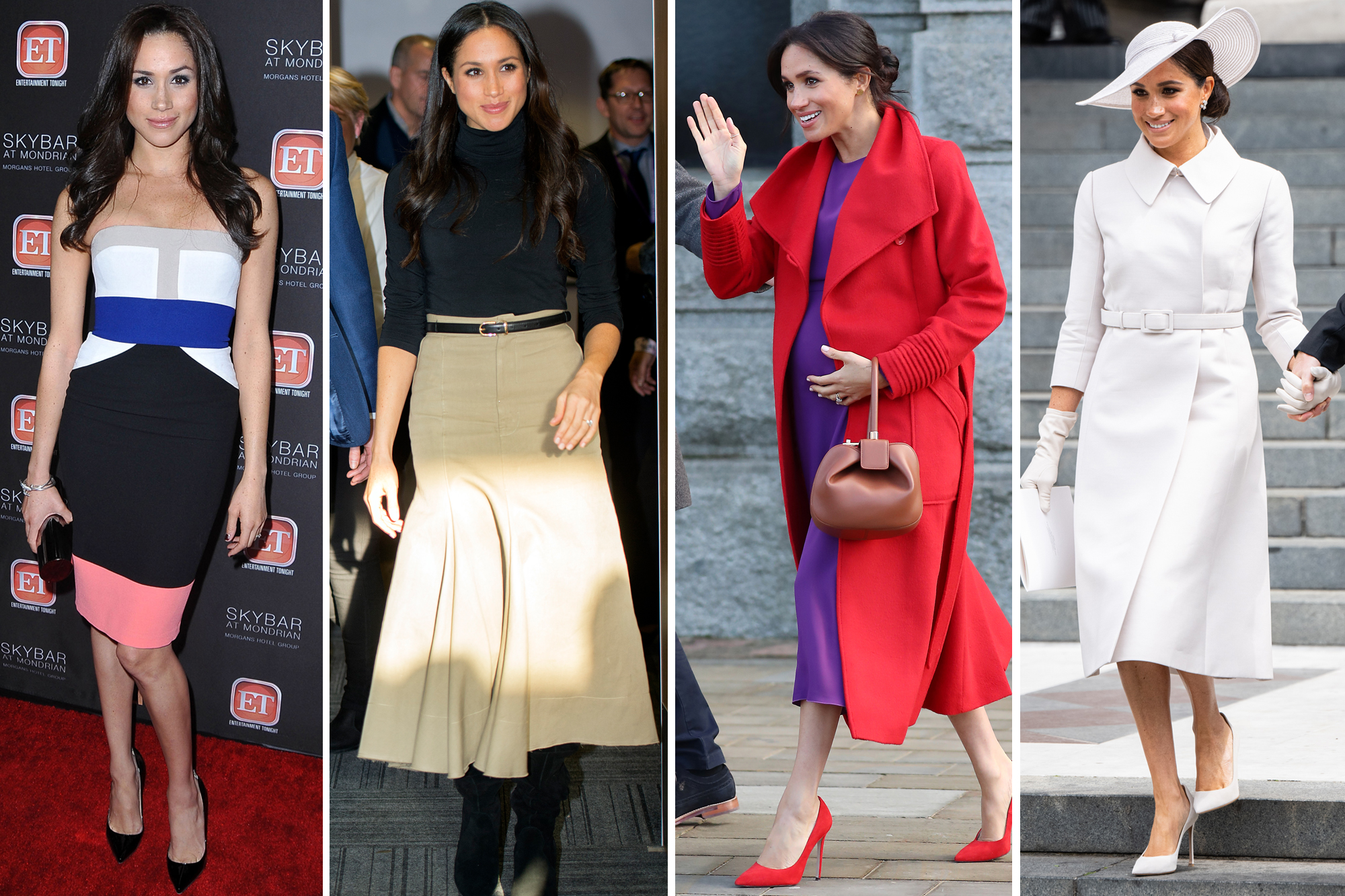 It’s been quite a ride since Meghan Markle married Prince Harry in 2018, and amid the highs and lows of royal life, the Duchess of Sussex’s style has evolved in major ways.

Markle became a Hollywood star when she appeared in legal drama “Suits” from 2011 to 2018, and back then, her wardrobe mostly featured fun minidresses, motorcycle jackets and jeans while she lived in Toronto.

Her look changed dramatically when she married into the royal family, with the newly minted duchess adding more demure looks, hats and even pantyhose to her wardrobe as she adapted to life in the UK.

And after she and Prince Harry resigned from their royal duties in 2021 and moved to California, Markle’s wardrobe shifted once more; these days, the duchess almost exclusively wears high-end designers like Carolina Herrera and Dior for public appearances.

From her acting days to her new life in Montecito, we’re taking a look at the style evolution of the Duchess of Sussex.

Markle wore labels like BCBG, Marchesa Notte and Mackage during her acting days.Getty

In the 2010s, Markle starred on “Suits,” frequently attending red carpet events and parties in colorful, curve-hugging cocktail looks — a far cry from the neutral hues and slouchier silhouettes she sports today. She also wasn’t afraid to show some skin, whether via a strapless frock or an ab-baring crop top. One thing that’s stayed the same through the years? Her love of a jacket or coat slung over her shoulders.

Markle went from ripped jeans to conservative skirts once her relationship status changed from girlfriend to royal fiancée.Getty

When the Californian started dating Prince Harry, she stuck to her laid-back style, even wearing distressed denim for her first public appearance with the prince at the 2017 Invictus Games. Once their engagement was announced, we saw Markle in more tailored toppers and modest silhouettes, like the camel maxi skirt and black turtleneck she wore with a long wool coat for her inaugural royal engagement in November 2017.

From royal bride to new mom-to-be, the Duchess of Sussex showed off a more subtle style as a member of the royal family.

The wedding gown Markle chose to become the Duchess of Sussex, designed by then-Givenchy head Clare Waight Keller, surprised many royal fans with its simplicity. And throughout her time in England, she kept to streamlined silhouettes and a palette of mostly beige, black, navy and white — with a few pops of color along the way to keep things interesting.

The old Meghan’s distressed jeans were replaced with midi skirts and evening gowns, but every so often we got a peep of her past style, like when she wore a striped sweater and black jeans to tour an equestrian club in Morocco or a Madewell denim jacket on the Sussexes’ tour of South Africa.

During her pregnancy with Archie, the duchess sported two Diana-inspired outfits.Getty

Through the years, we’ve seen the duchess rock a few Diana-inspired outfits, but she wore two outfits during her first pregnancy that were especially similar to looks seen on her late mother-in-law.

In January 2019, she sported a purple-and-red combo that reminded fans of two of Diana’s striking outfits from the 1980s, pairing a red Sentaler coat with an Aritizia midi dress. Two months later, Markle wore a custom green Erdem coat with black beading that looked very close to the one Princess Diana picked during her pregnancy with Prince William in 1982.

The duchess wore a casual combo of jeans, an “RBG” T-shirt and a J. Crew cardigan tied around her neck for a guest appearance on the “Teenager Therapy” podcast in 2020.teenagertherapy/Instagram

In March 2020, the Sussexes departed the UK for a new life in America. While it was rare to spot the duchess once the couple moved to California for good, we saw elements of her past style return as Markle volunteered and made special appearances during the height of the pandemic in 2020, dressed in casual staples like shorts, jeans and chambray shirts.

From a $690 Khaite bodysuit to a $1,290 The Row turtleneck and custom Dior coat, the duchess has shown off some high-end looks in her new life.Getty

Once pandemic restrictions lifted, the Duke and Duchess of Sussex made more public appearances — and Markle has worn some stunning designer outfits from labels like Dior, Givenchy, Carolina Herrera, Oscar de la Renta and Chanel lately. She also frequently wears trousers, unlike during her palace days, when she mostly stuck to dresses and skirts.

Whether it was a $1,290 cashmere turtleneck from The Row for a 2021 trip to New York City or the head-to-toe Dior look she wore to a church service during the Platinum Jubilee, Markle has been living her best life lately — and wearing the designer duds to prove it.

Gigi Hadid to launch knit clothing line, Guest in Residence
All about Kim Kardashian’s tummy-tightening treatment
We use cookies on our website to give you the most relevant experience by remembering your preferences and repeat visits. By clicking “Accept All”, you consent to the use of ALL the cookies. However, you may visit "Cookie Settings" to provide a controlled consent.
Cookie SettingsAccept All
Manage consent