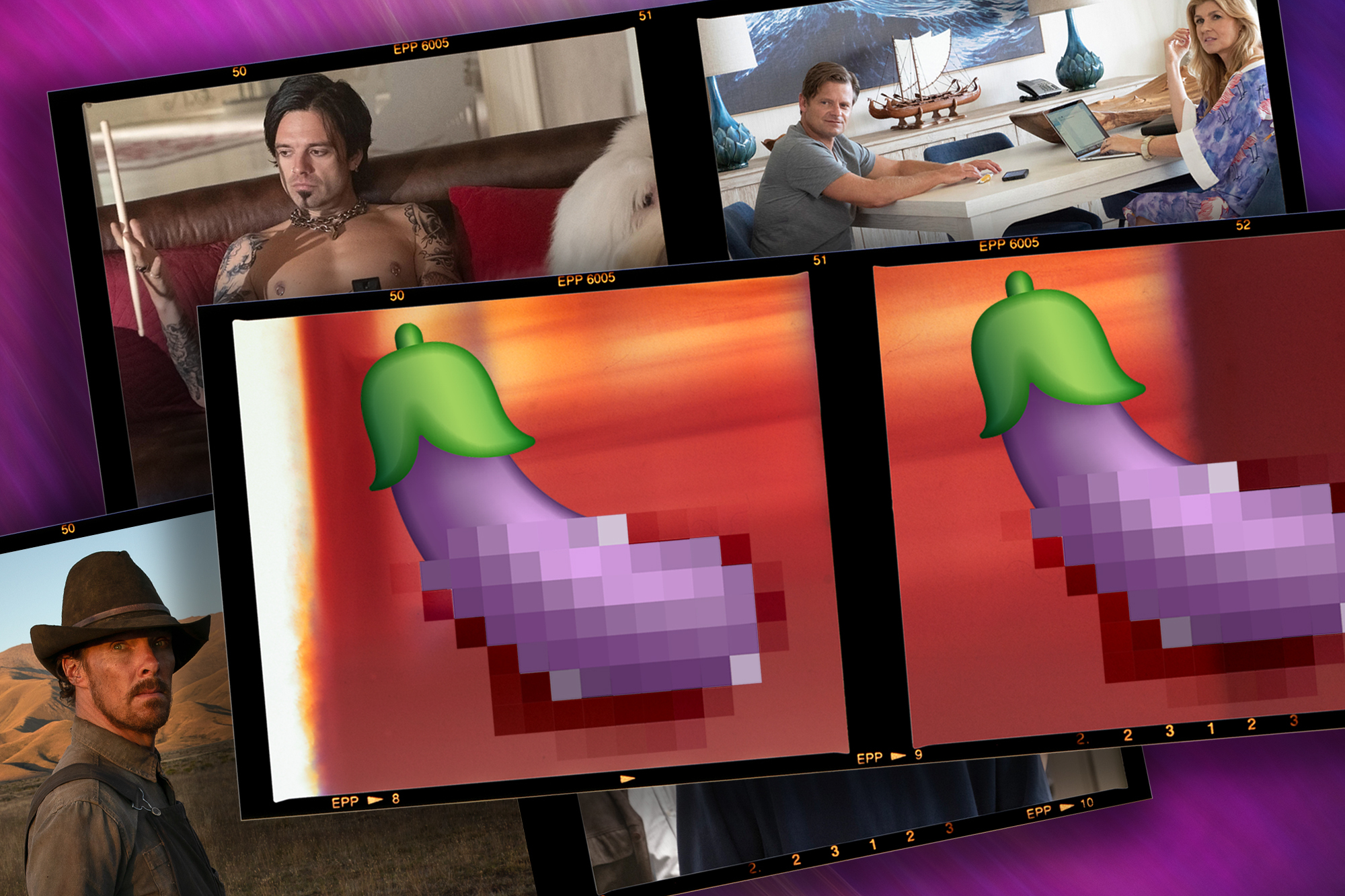 The year’s top performers sure are putting the “wood” in Hollywood.

Yes, this is the era of the on-screen peen. From “Euphoria’s” 71-and-counting penis tab to the talking member in “Pam & Tommy,” filmmakers are no longer afraid of a phallic moment. Dropping trou is now the mark of mastery: Look no further than an authentically full-frontal Benedict Cumberbatch as an Oscar front-runner for his filthy role in “The Power of the Dog.”

The proof may be in the prosthetic genitalia. Penises of all shapes, sizes and functionality are increasingly popping up on-screen in acclaimed series and films, lately including “The White Lotus,” “And Just Like That” and “Red Rocket.”

Special-effects makeup artist Jason Collins noted a surge in prosthetic penis requests — sculpting 15 different wangs in 18 months — that began when the just-renewed “Euphoria” debuted two and a half years ago.

Hollywood is dropping trou — and getting rewarded for it.Getty Images/iStockphoto

“I do think that the culture and the zeitgeist are changing with regards to what’s taboo and what’s not taboo anymore,” Collins, whose company, Autonomous FX, has worked on “Euphoria” and “Grey’s Anatomy,” told Thrillist.

After years of demanding gratuitous nudity from actresses, Hollywood is finally flipping the script with a well-timed willy — and getting rewarded for it.

While Richard Gere’s groundbreaking pants-dropping “American Gigolo” scenes from 1980 has acted as a catalyst for male on-screen nudity for the decades since, it is a lone wolf: No pants-dropping scenes that followed caused the same cinematic stir. Instead, prosthetic penises used in films such as “Step Brothers” and “We’re the Millers” were reserved strictly for comic relief.

But lately, filmmakers in the drama category are wising up to the power of the dong.

The engorged enthusiasm about male nudity may play a part in award nominations. “Don’t Look Up,” “The Power of the Dog” and “Nightmare Alley” all include an array of male appendages and, perhaps because of it, are on the road for Oscar glory.

Cumberbatch and Bradley Cooper are among the front-runners who manned up and stripped down in the past year.

“It was important to go there, unflinchingly and boldly,” Cooper, 47, said of “Nightmare Alley,” which marked his first-ever nude scene. While he “had to” do it for the story, his first day of filming granted more exposure than he might have been expecting — he was naked for six hours in front of the film crew.

Cumberbatch, 45, took a similar artistic interest in his “Power of the Dog” nude scene, telling the Hollywood Reporter, “I’m literally exposing myself in this film, and that’s interesting.”

The nudity is au natural in “The Power of the Dog.”KIRSTY GRIFFIN/NETFLIX © 2021

However, for those unwilling to bare their forbidden fruits for all the world to see, the prevalence of prosthetics has opened the gates for powerful performances.

Intimacy coordinator Amanda Blumenthal, who’s worked on “The White Lotus” and “Euphoria,” told Thrillist that one actor was actually relieved to wear a knockoff rather than film fully exposed.

“For a lot of performers, they do feel a bit more comfortable, in some ways, wearing a prosthetic, because they’re not being asked to reveal their own genitalia,” she said. “It’s like a costume piece, and it’s also part of a character. It’s not you.”

A fake also offers a primo souvenir for the lucky actors who wear the prosthetics.

And rumor has it Chris Hemsworth did the same after filming “Vacation.”

Matthew Mungle, who won an Oscar in 1993 for his makeup effects in Francis Ford Coppola’s “Dracula,” supplied the member for the 2015 comedy. “Production, I heard later, took and put it in a shadow box and gave it to him,” Mungle said of Hemsworth, 38, and his prosthetic. “The word is he has it on his mantle at his house with the Thor hammer — so he’s got both hammers there.”

Whether kept as a trophy or merely on display on-screen, special-effects designers are now stepping up their game to satisfy the entertainment industry’s big dong energy.

“Euphoria” fans were convinced they actually caught a glimpse of Eric Dane, 49, in his full glory when his Cal has a scene-stealing meltdown and urinates in his family’s foyer.

While the penis was prosthetic, the rousing performance felt raw as ever.

Makeup artist and department head Doniella Davy told Thrillist that in “Euphoria,” the pressure was on to create a prosthetic that wouldn’t detract from dramatic moments like that one — while still contributing a hefty shock factor.

“You’re walking a line of something that’s completely ridiculous that could take the audience out of it,” Collins added.

“And Just Like That” includes an NSFW sex scene between Evan Handler and Kristin Davis, who play married couple Harry and Charlotte. Showrunner Michael Patrick King confirmed it was a prosthetic.Craig Blankenhorn/HBO Max

With authenticity comes the question of size — which, yes, matters. Collins worked on “Pam & Tommy,” and knew what was he was getting into, since Mötley Crüe drummer Tommy Lee has a reputation for his sizable pecker due to the sex tape that shocked the internet.

Collins told The Post that “well over $100,000” was spent on prosthetics for the show, including the animatronic penis and pierced nipples actor Sebastian Stan, 39, wore in order to “guarantee that audiences [could] see the impressions of Tommy’s nipple rings underneath every shirt.”

In “Pam & Tommy,” viewers also get a full-frontal phallic scene with Sebastian Stan.HULU

“We were able to say ‘OK, he is of sizable mention. How long, big, or how thick do we want to go?’” Collins told Thrillist. “We also have to bring [Stan] into play as well, because body types are completely different.”

The prosthetic “was more than one-sixth of his body,” Tichenor said in an interview with Grantland.

So, as actors unzip for a chance at phallic fame and filmmakers vie for a gold statuette, the full-frontal frenzy could make prosthetic peens the perfect Oscar bait — knock on wood.