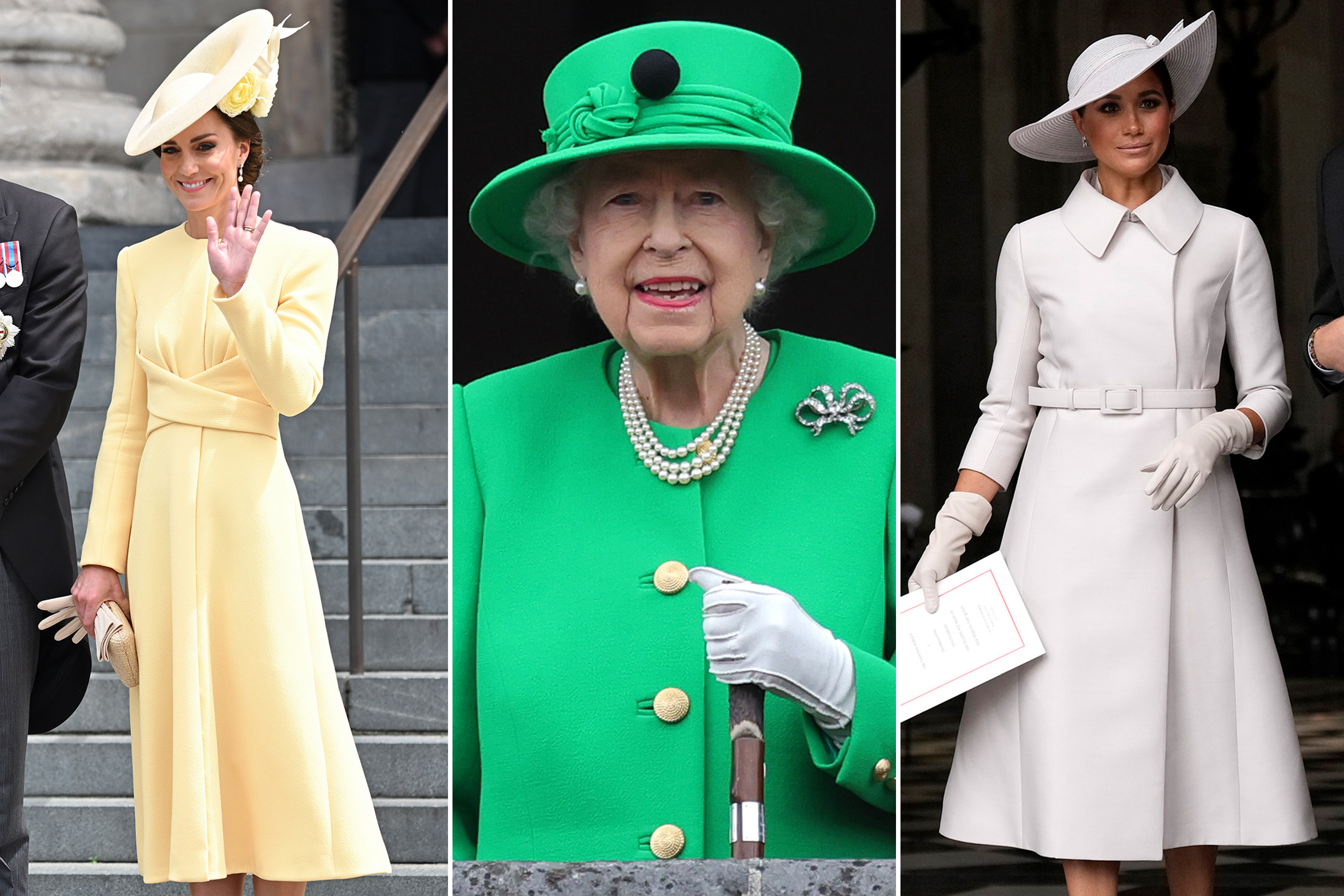 The festivities kicked off last Thursday, June 2 with the Trooping the Colour parade, and the whole royal family coordinated in shades of blue — thought to be Her Majesty’s favorite color.

Sustainability also seemed to be top of mind at the event, with Kate Middleton, Meghan Markle and Camilla Parker Bowles all opting for outfits that were already in their closets.

Camilla, Duchess of Cornwall, and Catherine, Duchess of Cambridge, during the 2022 Trooping the Colour parade. Getty Images

The 40-year-old Duchess of Sussex, meanwhile, appeared to rewear the navy off-the-shoulder Roland Mouret dress she debuted on the eve of her wedding to Prince Harry in 2018, pairing it with a ribbon-tied Stephen Jones hat for a fresh spin.

The Duchess of Sussex appeared to rewear a look from her royal wedding for the Trooping the Colour parade.© Kelvin Bruce

But it was 4-year-old Prince Louis’ look (and series of hilarious facial expressions) that stole the show, with Kate Middleton and Prince William’s youngest sporting the same sailor suit his father did at Trooping the Colour in 1985, when the Duke of Cambridge was only 2.

On Friday, the family headed to St. Paul’s Cathedral for the National Service of Thanksgiving, with the Duchess of Cambridge looking like a ray of sunshine in a pale yellow Emilia Wickstead, coordinating Philip Treacy hat and the Queen’s Bahrain Pearl Earrings.

The Duke and Duchess of Cambridge attend the National Service of Thanksgiving at St. Paul’s Cathedral.WireImage

And this time, it was Markle’s turn to channel Diana in a head-to-toe Dior look consisting of a sleek belted coat, gloves, straw hat and pumps.

The Cambridges visited Wales on Saturday, with Kate nodding to the Welsh flag in a bright red coat by Eponine London while her husband and children coordinated in navy blue.

Prince William and Kate Middleton brought Prince George and Princess Charlotte on their trip to Cardiff Castle in Wales.WireImage

For that evening’s Platinum Party at the Palace, the duchess changed into a cream-colored Self-Portrait midi dress ($570) with a blazer-style bodice, but she wasn’t the only Middleton in attendance: Her pregnant sister Pippa was spotted in the stands as well, showing off her baby bump in an apple green smocked dress by Me+Em ($895).

Both Kate and Pippa Middleton attended the Saturday’s Platinum Party at the Palace.Getty Images

And to close out the celebrations on Sunday, Kate and her kids did a bit of baking at home, with the duchess dressing down in a pink gingham Brora blouse ($205) and her favorite & Other Stories jeans ($99).

She then stunned in a vibrant raspberry Stella McCartney dress for the Platinum Jubilee Pageant, along with matching pumps and sparkling floral earrings reportedly from the Queen’s own collection.

Speaking of Her Majesty, she made a surprise appearance on the balcony of Buckingham Palace Sunday afternoon, honoring late husband Prince Philip in a bright green Stewart Parvin look and matching Rachel Trevor Morgan hat affixed with a black mourning pin.

Here’s to 70 years on the throne for Britain’s longest-reigning monarch.

Iggy Azalea wears Bella Thorne’s ‘naked’ dress on birthday
Emily Ratajkowski celebrates birthday in bikini on Instagram
We use cookies on our website to give you the most relevant experience by remembering your preferences and repeat visits. By clicking “Accept All”, you consent to the use of ALL the cookies. However, you may visit "Cookie Settings" to provide a controlled consent.
Cookie SettingsAccept All
Manage consent