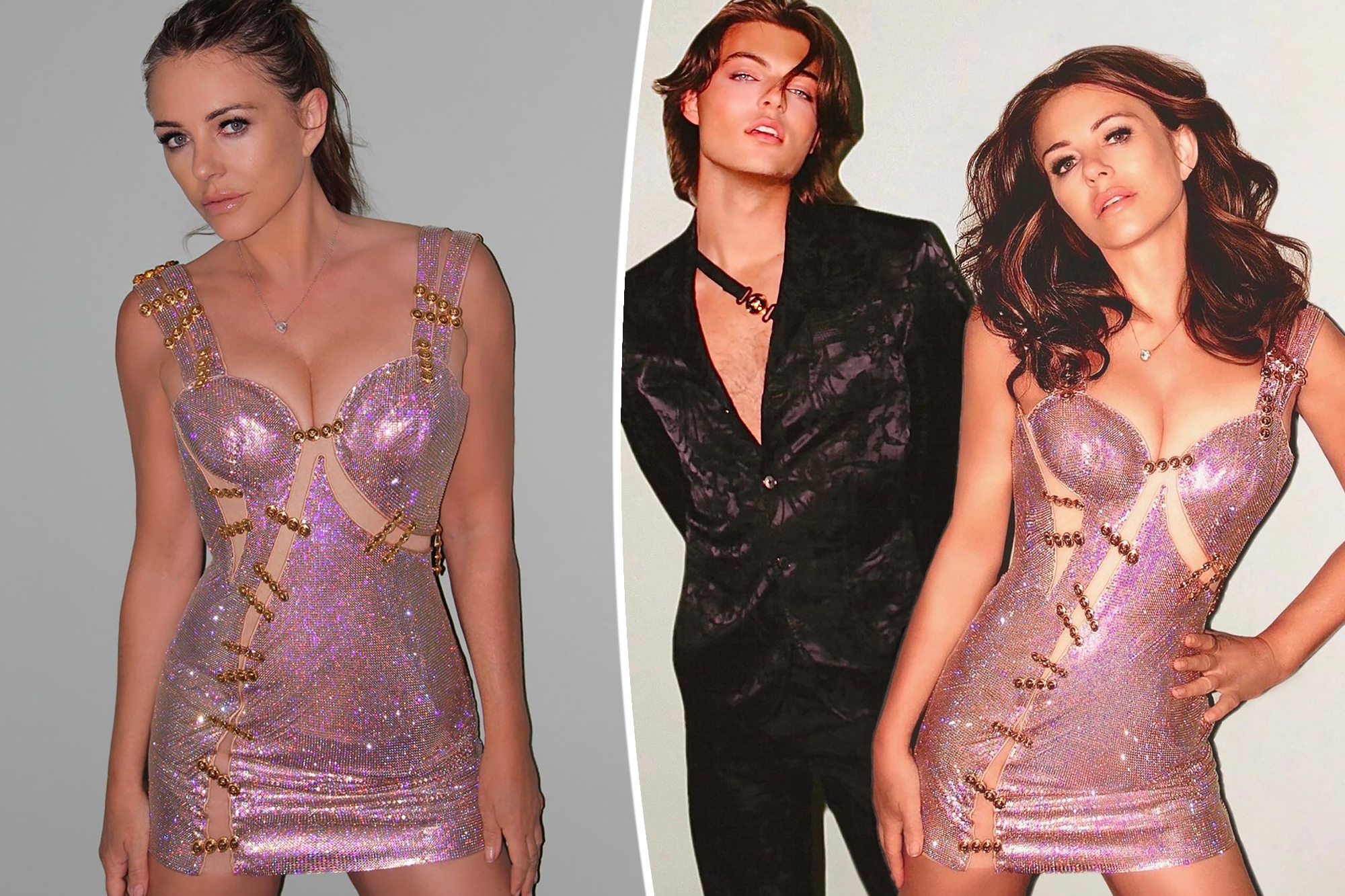 Nearly two decades after shocking the world (and making fashion history) in her black safety-pinned gown by the luxury label, the “Bedazzled” actress chose an equally sexy Versace style to celebrate her birthday.

On Sunday, Hurley — who turned 57 on June 10 — posed on Instagram in a sparkling pink chainmail dress with wild cutouts.

Instead of being tethered together with gold safety pins, her birthday mini was held closed with tiny gilded discs — but still showed plenty of skin.

Hurley posed alongside her lookalike son, Damian, who showed off a black Versace suit and shampoo commercial-worthy luscious locks.

The “Royals” queen captioned her own snaps, “Having a @versace moment ❤️❤️,” tagging her son, designer Donatella Versace and her stylist, Mike Adler.

The British actress shot to fame when she showed off this Versace safety pin dress alongside Hugh Grant in the ’90s. Getty Images

Back in 1994, Hurley wore her pinned-together black gown to the premiere of “Four Weddings and a Funeral” alongside then-boyfriend Hugh Grant.

In the years since, stars including Emily Ratajkowski, Miley Cyrus, Bella Hadid and Miranda Kerr have paid homage to the unforgettable dress. Damian even nodded to his mom’s most famous look with a safety-pinned Versace blazer in 2019, and Lady Gaga got her hands on Hurley’s original in 2012.

Hurley’s latest look is also reminiscent of the slit-up-to-there purple gown she wore at the CFDA Awards in 1999 — which she hauled out of her closet for Harper’s Bazaar in 2020.

Perhaps we’ll see her bring her birthday dress out in a few decades, too.

David Beckham joked about the slovenliness of his wife
Jennifer Aniston wears ‘Friends’ dress, 20 years later
We use cookies on our website to give you the most relevant experience by remembering your preferences and repeat visits. By clicking “Accept All”, you consent to the use of ALL the cookies. However, you may visit "Cookie Settings" to provide a controlled consent.
Cookie SettingsAccept All
Manage consent