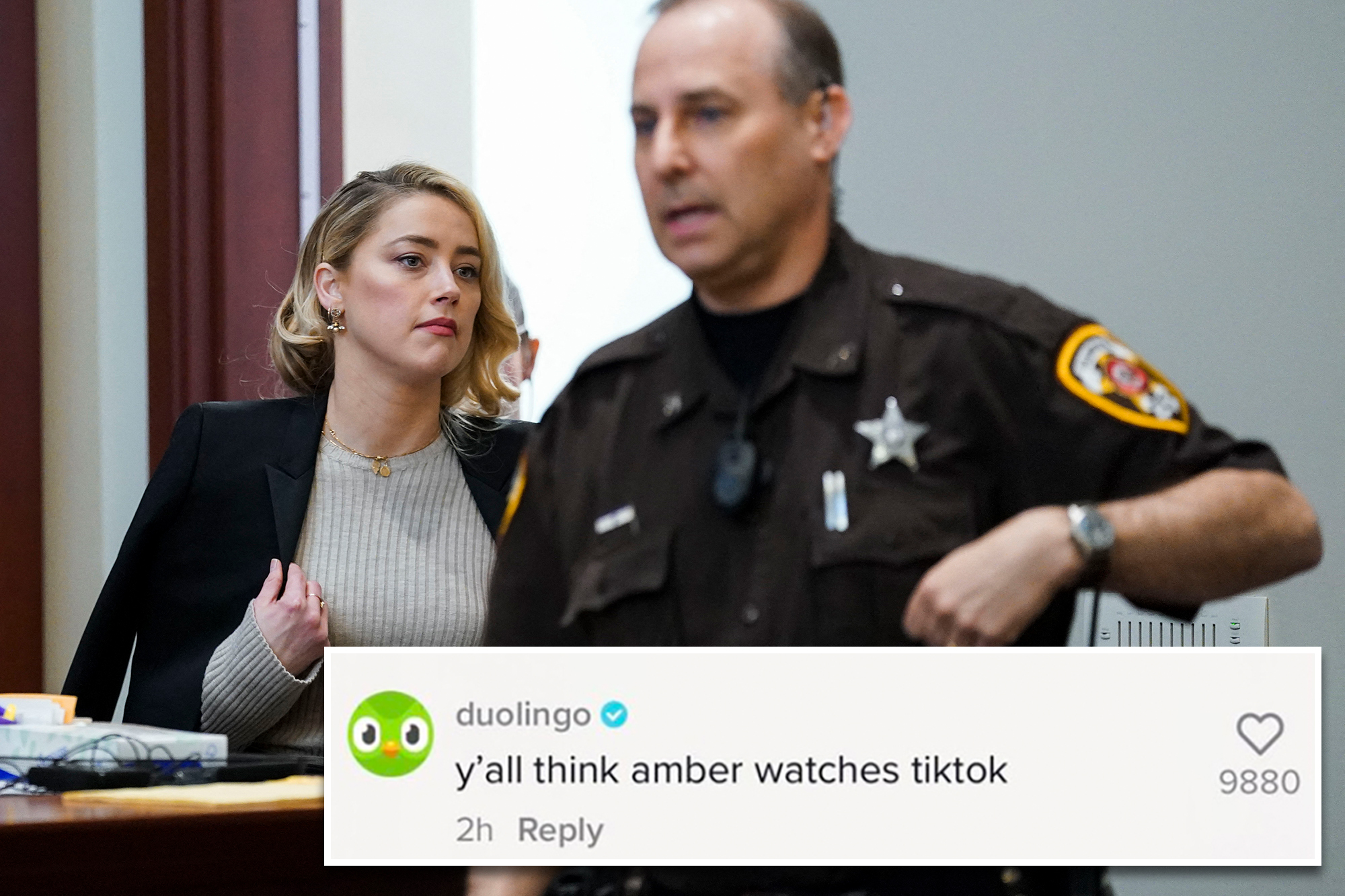 Language-learning app Duolingo has come under fire after its social media team left an “insensitive” quip about Amber Heard beneath a viral TikTok video.

On Tuesday, NBC News uploaded a clip to TikTok showing Heard being cross-examined at the blockbuster defamation trial where she is being sued by ex-husband Johnny Depp.

In the video, Heard insinuated that she was the target of an online hate campaign, saying: “You can look either of us up online and figure out who’s being abused.”

The joke was quickly condemned by furious social media users, many of whom took to Twitter to slam the company for weighing in on a sensitive legal case.

“On what planet does a brand — even @duolingo — think it’s cool to crack jokes about an alleged victim of domestic violence? The Depp fandom bubble on TikTok is very real but no brand should get anywhere near it,” one person blasted, with their tweet racking up more than 44,000 likes.

“I’d sue Duolingo just to make a point,” another raged, implying Heard should take legal action against the company.

“We’re waiting on a statement explaining why your team thinks domestic violence is a laughing matter!” a third person tweeted directly to Duolingo.

The joke was quickly condemned by furious social media users, many of whom took to Twitter to slam the company for weighing in on a sensitive legal case. @ChrisHarihar / Twitter

However, not everyone was angered by the fact the company chimed in on the trial, with one accusing Amber Heard supporters of clutching at straws with their outrage.

“You guys don’t actually care about this, right? A TikTok comment…from Duolingo?” the Twitter user asked.

Some companies may feel compelled to comment on the ongoing legal drama in a bid to maintain relevance, as the court case is captivating people across the US.

Some companies may feel compelled to comment on the ongoing legal drama in a bid to maintain relevance, as the court case is captivating people across the US.

A recent analysis from social media monitoring company NewsWhip shows Americans are more interested in the Depp v. Heard trial than they are in news stories about inflation, abortion or the war in Ukraine.

Indeed, the trial has been playing out on social media, with tens of thousands of videos pertaining to the case created on TikTok.

On that app, videos with the hashtag “#JusticeForJohnnny” have been viewed a staggering 13.4 billion times. A majority of the clips created on TikTok have been critical of Heard and her testimony.

Heard has been the subject of intense hatred on Twitter and TikTok, with Johnny Depp superfans smearing her name.

Depp is suing Heard for defamation over a 2018 Washington Post op-ed that the “Aquaman” star wrote, in which she said she was a victim of sexual violence. She did not specifically name Depp in the article, but it was written after Heard filed for a restraining order against her ex-husband in 2016 over abuse allegations.

Depp is seeking $50 million in damages. Heard has filed a $100 million countersuit.

Harry Styles proud to flash ‘bum-bum’ — but ‘no peen’ — in new movie
Porsha Williams Celebrates The Birthday Of Kandi Burruss – Check Out Her Post Below
We use cookies on our website to give you the most relevant experience by remembering your preferences and repeat visits. By clicking “Accept All”, you consent to the use of ALL the cookies. However, you may visit "Cookie Settings" to provide a controlled consent.
Cookie SettingsAccept All
Manage consent