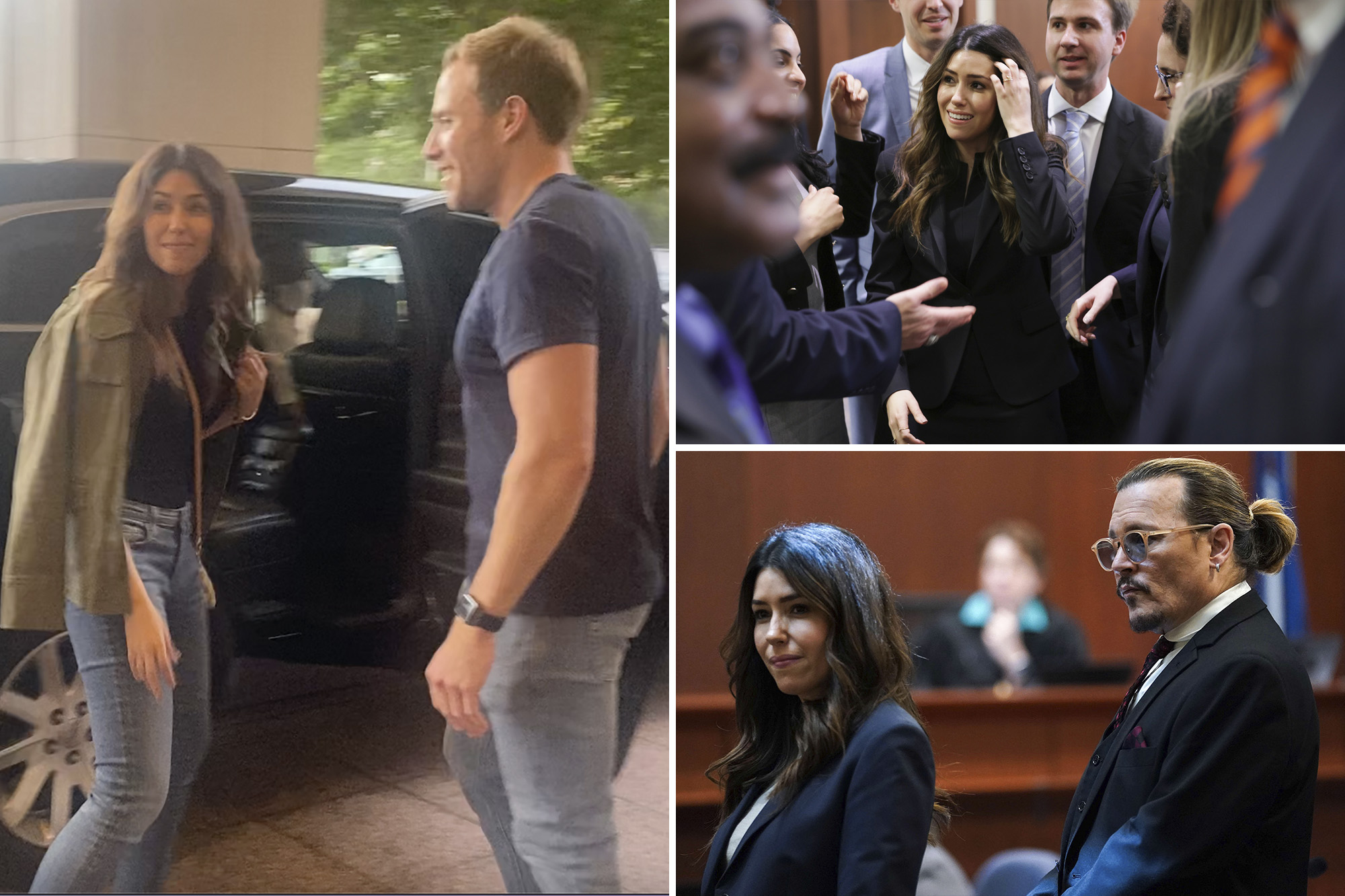 The 37-year-old attorney — who helped win the “Pirates of the Caribbean” star’s recent defamation case — was spotted out and about with her boyfriend, Edward Owen.

The pair was bombarded with interviews and photographers as they left the Ritz-Carlton hotel in Virginia Thursday heading to the airport.

Fans were waiting outside for Vasquez and her man, who took selfies with onlookers. Reporters tried to even get in a question or two, but the lawyer just moved on to her next destination as she got into a car.

Owen, 38, is an England-based WeWork executive who met Vasquez in November at the Cow gastropub in London, according to the Daily Mail. He was educated at Cambridge and is currently the head of real estate for Europe, the Middle East and Asia for the co-working space company.

“It’s quite a new relationship but Edward is smitten with her,” a source recently told the publication. “He has visited Camille in the US since this trial started and she plans to visit him in the UK as soon as the case is over.”

Vasquez was spotted hopping into a car with her boyfriend Edward Owen as they were heading to the airport from their hotel near Fairfax County Courthouse on Thursday.SplashNews.com

“It’s long-distance and they’re both high flyers in their respective careers, but they’re hoping to make it work,” the insider added.

Vasquez was at the helm of the Depp trial, as a significant member of his legal team, and representing the firm Brown Rudnick. Depp, 58, sued ex-wife Amber Heard for accusing him of abuse in a 2018 Washington Post op-ed.

The court case came to a close on June 1, with the jury awarding Depp $10 million in compensatory damages and $5 million in punitive damages.

Johnny Depp stands next to his lawyer Camille Vasquez after a break in the defamation trial against ex-wife Amber Heard at the Fairfax County Circuit Courthouse in Fairfax, Virginia, on May 18.POOL/AFP via Getty Images

The University of Southern California graduate questioned the “Aquaman” actress several times on the stand and also headed Heard’s cross-examination.

The Post reported on Sunday that the native Spanish speaker has been inundated with offers from Hollywood and is currently at the center of a bidding war between law firms that want her on their legal teams.

“Talent agents are circling Camille because they recognize that she is the unicorn — a smart, savvy, poised attorney whose impactful performance during the trial propelled her to a rare level of visibility,” a source noted Sunday. “And the fact that she is a woman of color is an added bonus.”

Vasquez is becoming a rising star in her own right after helping win Depp’s court case.AP

“Camille is inarguably a great voice to weigh in on legal matters and networks are naturally chomping at the bit to speak with her about on-air opportunities,” a former network executive familiar with the offers revealed to The Post.

Vasquez is still an associate at Brown Rudnick, however, celebrity lawyer Judd Burstein believes that “she’ll be a partner soon.”

Another insider stated: “The legal community is buzzing with firms fighting to be the highest bidder for Camille to join their team. She’s a shark and her performance in trial showed it.”

‘First Kill’ star Imani Lewis on the Netflix lesbian vampire show
‘Downton Abbey’ star accuses Paddington Bear of stealing from Queen
We use cookies on our website to give you the most relevant experience by remembering your preferences and repeat visits. By clicking “Accept All”, you consent to the use of ALL the cookies. However, you may visit "Cookie Settings" to provide a controlled consent.
Cookie SettingsAccept All
Manage consent