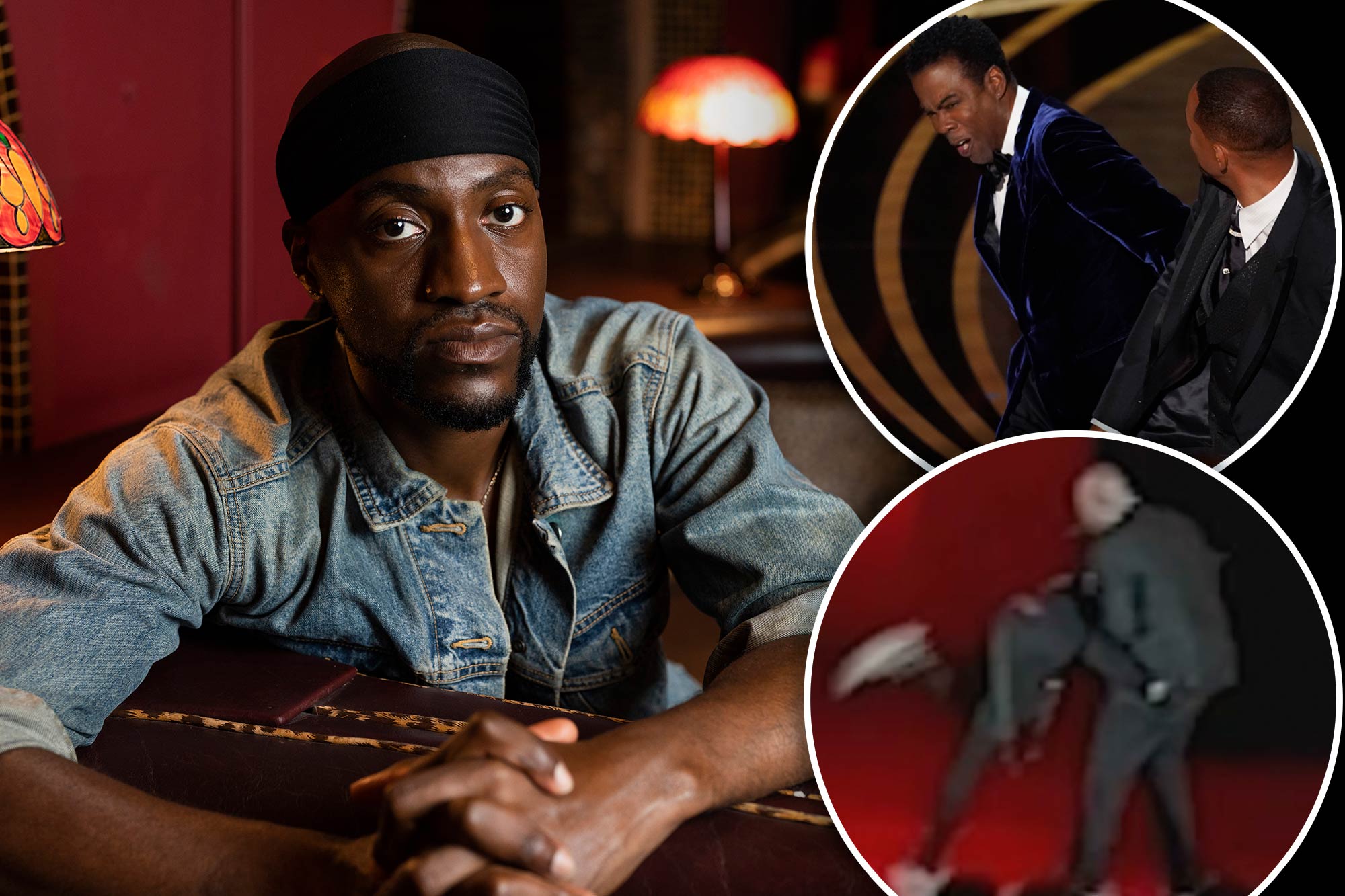 On March 23, standup comic Sampson McCormick was performing at the Win-River Resort & Casino in Redding, Calif., a venue he’s headlined many times over the last decade. But this time was different because it ended with him getting punched in the face.

It started when a female heckler interrupted his act, and McCormick, 36, made a few jokes at her expense. “I wasn’t mean or anything, just roasted her a little bit and she got upset,” he said.

“The next thing I know, a big, burly man came rushing up to the stage and hit me in my jaw.”

In his 21 years of performing, McCormick said he’s dealt with plenty of hecklers, “but this was the first fistfight I’ve ever been in while performing.”

Amid two recent high-profile assaults of A-list comics onstage — first Chris Rock, who was slapped by Will Smith at the Oscars in March, and Dave Chappelle, who was tackled by a stranger at the Hollywood Bowl earlier this month — comedians across the country say violence from audience members is an increasing problem.

During his 21-year career, McCormick said he has dealt with plenty of hecklers but no actual violence — until last March.Lauren Justice for NY Post

Curtis Shaw Flagg, 37, president of The Laugh Factory in Chicago, told The Post he’s seen an alarming uptick in incidents over the past year, as people feel increasingly emboldened to lash out if a comic displeases them.

“Not long ago, we had a patron stand up in the middle of a performance and say, ‘I will be outside waiting for you, I’m going to kill you,’” Flagg said. “After the show, we did a sweep of the outside and there was no sign of the guy, and the comic left unharmed. But nobody felt safer.”

In recent weeks, the Laugh Factory chain — which has clubs in Hollywood, Las Vegas, Chicago, Reno and Long Beach — has added cameras and metal detectors to its venues, and in some locations, they’ve doubled their security personnel.

Even while under attack, McCormick managed to record his assault on camera and document it on social media. Twitter/Sampson McCormick

“Where there’s smoke, there’s fire,” Flagg said. “Chris Rock was the kindling. And Chappelle put a little more flame in the fire. Those are the guys we think of as untouchable.

“I’m literally thumbing through security applications as I talk to you,” added Flagg. “We want people to know when they’re coming in, if you try anything, you will be handled.”

Many comics reacted to the Rock and Chappelle attacks with fear and anger.

Howie Mandel told E! News he doesn’t “want to go on stage. I’m just really afraid.” Bill Maher called it a “war on jokes,” and standup Heather McDonald offered free front row tickets to any police officers who want to attend her shows. “Please DM me,” she wrote on Instagram. “I suggest other comedians offer to do the same.”

Meanwhile, over the past year, lesser-known stand-up comics have dodged punches in Australia, been accosted by angry rappers in Atlanta and had their personal space invaded by a “Real Housewives” cast member in New York.

Comic Affion Crockett posted on Instagram about a woman “storm(ing) the stage like the Capitol” at his performance in Jacksonville, Fla., in November 2021. (She told the stunned comic that his jokes were “insulting a lot of people tonight.”) Several comics came to Crockett’s defense online, including Kathy Griffin, who tweeted “This is why I’m not going back on tour yet… This is not how even a ‘normal heckler’ behaves. Walking up on stage? I don’t think so. She is zombie-like.”

When Will Smith hit Chris Rock at the Oscars on March 27, Americans witnessed on-stage violence against comedians right in their living rooms.Chris Pizzello/Invision/AP

For the most part, comics in the past didn’t feel physically in danger for cracking a joke.

Eddie Murphy, who made wildly offensive homophobic jokes during the ’80s, apologized after a protest organized by gay rights activists in San Francisco shut down one of his movie shoots in 1996. And when Andrew “Dice” Clay hosted “Saturday Night Life” in 1990, his monologue was interrupted by protesters shouting, “Racist, sexist, anti-gay, Clay go away!” Jerry Seinfeld once had a drink thrown at him, and Joe Piscopo had his nose broken by mobsters in New York.

But mostly, telling offensive jokes wasn’t a ticket to abuse. When a video of Pauly Shore getting slapped by an angry audience member went viral in 2006, it wasn’t long before news leaked that the whole thing had been staged.

That invisible barrier between audience and performer has disappeared in recent years, said Wayne Federman, 62, a stand-up comedy vet and author of the 2021 book, “The History of Standup from Mark Twain to Dave Chappelle.”

What changed? Thirty or 40 years ago, “the world was a very different place,” said Judy Gold, 59, a standup and author of “Yes, I Can Say That: When They Come for the Comedians, We Are All in Trouble.”

“People attending shows didn’t have recording devices back then. If someone didn’t like a comedian, they wouldn’t attend their shows or simply changed the channel. Since the advent of social media, everyone has a soapbox. People feel powerful sitting behind their electronic devices, spewing hate and conspiracy theories.”

Now, people are taking out their frustrations on everyone from airline employees to professional athletes to school teachers. A CBS News poll from January found that 54 percent of participants believe the “biggest threat to America’s way of life” isn’t natural disasters or foreign threats, but “other people in America.”

Comic Judy Gold said social media has emboldened audience members who might have previously avoided comics they found offensive. Thanks to Instagram and Twitter, she said they now “have a soapbox.”T. Charles Erickson

Comedy clubs, in particular, can be powder kegs, said Federman, “because they usually combine cramped spaces, alcohol consumption, proximity to the performer, and — at times — provocative comedians.”

Jamie Masada, the 68-year-old owner and CEO of the Laugh Factory, has been running the iconic club’s original Hollywood location since 1979, where he’s booked everyone from Richard Pryor to George Carlin to Sam Kinison, and he’s never seen anything like the vitriol simmering in comedy audiences today.

“Just a few weeks ago, some young guy stormed past me, heading right for the stage,” Masada said. “I was like, ‘Where are you going?’ And he said, ‘I’m going to talk to the comic.’ I was like, ‘No, no, no, you can’t do that. That’s not how this works.’ Our security guys ran him out, but it happens all the time these days.”

Masada, who recently spent more than $15,000 on new security cameras, called it “plastic surgery. It won’t solve anything.” What he thinks is needed is a grand gesture.

“Will Smith and Chris Rock should go to a stadium, hug each other, say it was a mistake, and we’ll film it all and release it as a commercial,” Masada suggested. “I’ll pay for the whole thing.”

Flagg agrees that we need to start having more civil conversations. He recalled a recent confrontation at the Laugh Factory, when an offended audience member cornered a comic at the club’s bar and grilled him over a joke he found offensive.

“They ended up having an open and honest conversation about it,” Flagg said. “The weird thing is, it finally clicked for this guy, why he was maybe getting worked up over nothing, when the comic told him, ‘I meant it as a joke.’ He was like, ‘Oh, OK, now I understand.’ That’s just flabbergasting to me. Why are you coming to a comedy club if not for jokes? Are they expecting a TED talk?”

Jamie Masada, owner and CEO of the Laugh Factory, recently spent $15,000 on new security cameras, but suspects they will do little to curb on-stage violence. Getty Images

For McCormick, he’s not willing to sit down with every irate customer who doesn’t like his shtick. He’s more concerned with how to protect himself from bodily harm. “After my attack, I was told by the sheriff’s department that I could get a misdemeanor for defending myself,” he said. “Even after being hit first, by someone twice my size.”

He said he’ll continue to tour, with a comedy act that he considers uplifting, fun, and positive. And the next time he sees somebody charging to the stage, with their fists clenched?

“I grew up in Anacostia, in downtown Washington, DC,” he said. “I know how to punch somebody’s lights out if I have to. And when I need to get the hell out of there, you won’t catch me because I’m fast.”

Foo Fighters drummer Taylor Hawkins told friends he “couldn’t f— do it anymore” before death: Rolling Stone report
Eric Clapton cancels shows after testing positive for COVID-19
We use cookies on our website to give you the most relevant experience by remembering your preferences and repeat visits. By clicking “Accept All”, you consent to the use of ALL the cookies. However, you may visit "Cookie Settings" to provide a controlled consent.
Cookie SettingsAccept All
Manage consent