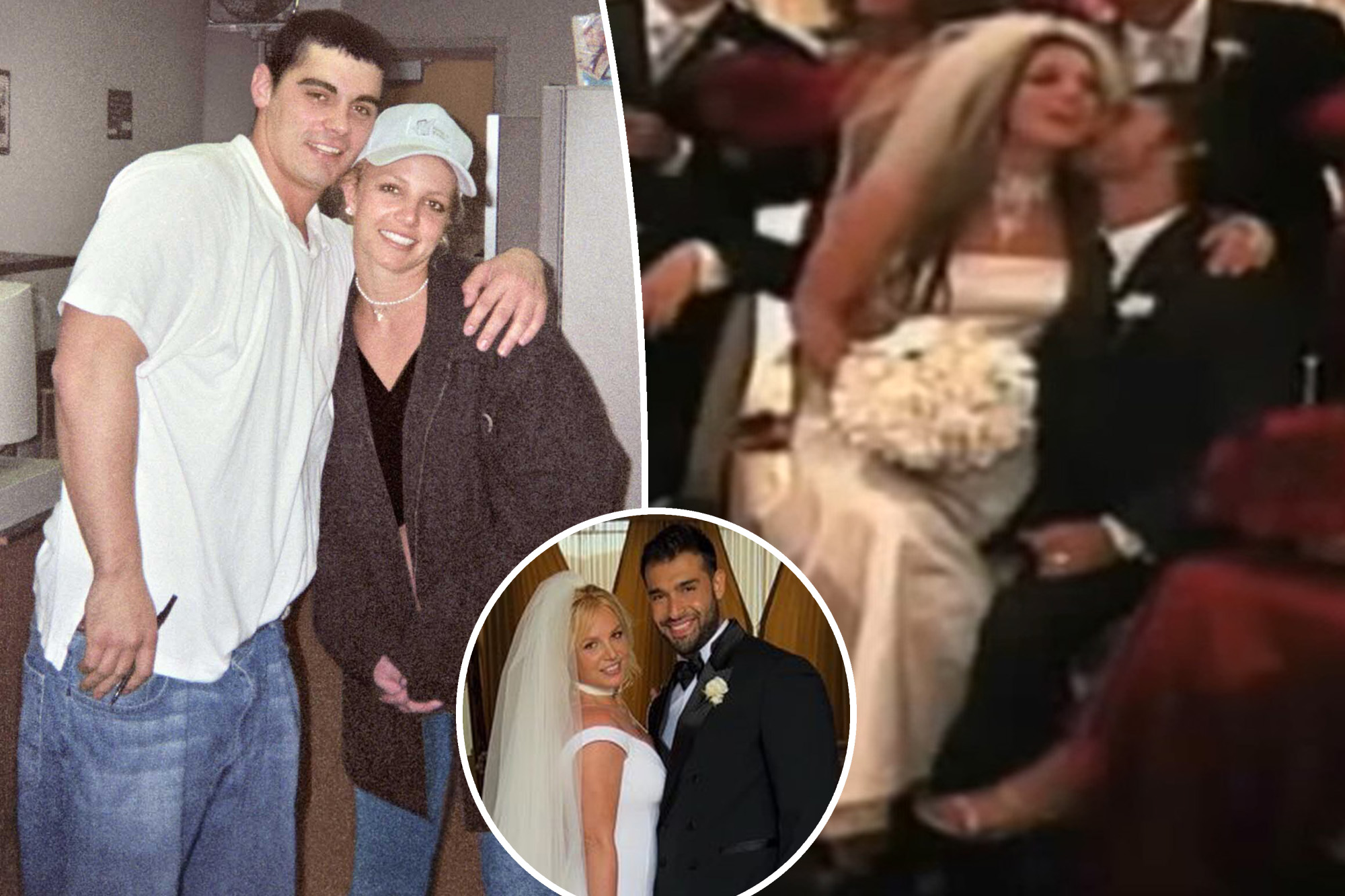 Oops!… She did it again.

For her walk down the aisle, the Princess of Pop wore a sleek, sophisticated Versace wedding dress with a portrait neckline, pearl buttons, high slit and 10-foot train.

She also wore plenty of diamond jewelry by Stephanie Gottlieb, including a sparkling choker, a tennis bracelet and drop earrings in addition to her two stone-studded wedding bands.

But the bridal style didn’t stop there. Designer Donatella Versace also supplied Spears with three different reception dresses: a black blazer-inspired mini, a two-toned outfit and a red fringed frock, all ideal for dancing the night away with her nearest and dearest.

Spears and Versace have worked together for many years, with the designer dressing the musical icon multiple times throughout the 2000s and supporting her during her lengthy conservatorship battle.

She later changed into a red mini to party with pals including Madonna.Kevin Ostajewski/Shutterstock

This wasn’t the “Stronger” singer’s first time saying “I do,” however. Back in 2004, she and childhood pal Jason Alexander had a blink-and-you’ll-miss it Las Vegas ceremony, resulting in 55 hours of wedded bliss.

For the impromptu union at the Little White Wedding Chapel in Sin City, Spears went casual in era-appropriate low-rise jeans (her “something blue,” perhaps), a belly-baring black crop top, and just a touch of bridal white in the form of a baseball cap.

The marriage didn’t last, but in a show of “Toxic” behavior, Alexander, 40, later attempted to crash her wedding to Asghari.

Less than a year after Spears’ and Alexander’s vows were annulled, the superstar wed backup dancer Kevin Federline — better known as K-Fed — with much of their courtship and subsequent nuptials captured on their reality show, “Britney and Kevin: Chaotic.”

At their nuptials on September 18, 2004, a newly brunette Spears strutted down the aisle in a much more traditional strapless silk gown by celebrity favorite Monique Lhuillier.

“Britney was at the height of her career when her team reached out to me to design her wedding dress,” Lhuillier told Page Six Style exclusively in 2021.

“She was incredibly down to earth, sweet and kind. She had a childlike excitement about the process. We had multiple fittings in undisclosed locations to avoid paparazzi. I designed her gown, neckpiece, gloves and a beautiful cathedral-length veil. I also designed her second lace minidress and dressed her entire bridal party.”

She went short and sexy for the reception.Kevin and Britney: Chaotic/YouTu

Spears’ sheer, sultry reception look wasn’t her only outfit change of the evening; for the couple’s afterparty at a nearby nightclub, she sported a custom white Juicy Couture tracksuit with “Mrs. Federline” spelled out across the back. Her bridesmaids, meanwhile, coordinated in pink Juicy suits personalized with “The Maids,” while mom Lynne Spears’ look read, “Hot Mama.”

Federline and his groomsmen all wore white Juicy sets as well, with the groom’s identifying him as “The Pimp.” (His buddies were “The Pimps.”)

Spears and Federline on their wedding day in September 2004.Kevin and Britney: Chaotic/YouTu

Despite their large loungewear order, Spears and Federline didn’t last long as husband and wife; the couple, who share sons Sean Preston and Jayden James, separated in 2006.

In an iconic move, the “Sometimes” crooner wore her lacy reception dress to buy a Mercedes on the day the duo’s divorce was finalized in 2007.

Love may fade, but fashion is forever.

Cher and Donatella Versace launch the Chersace collection
Princess Eugenie debuts tattoo at Queen’s Platinum Jubilee
We use cookies on our website to give you the most relevant experience by remembering your preferences and repeat visits. By clicking “Accept All”, you consent to the use of ALL the cookies. However, you may visit "Cookie Settings" to provide a controlled consent.
Cookie SettingsAccept All
Manage consent