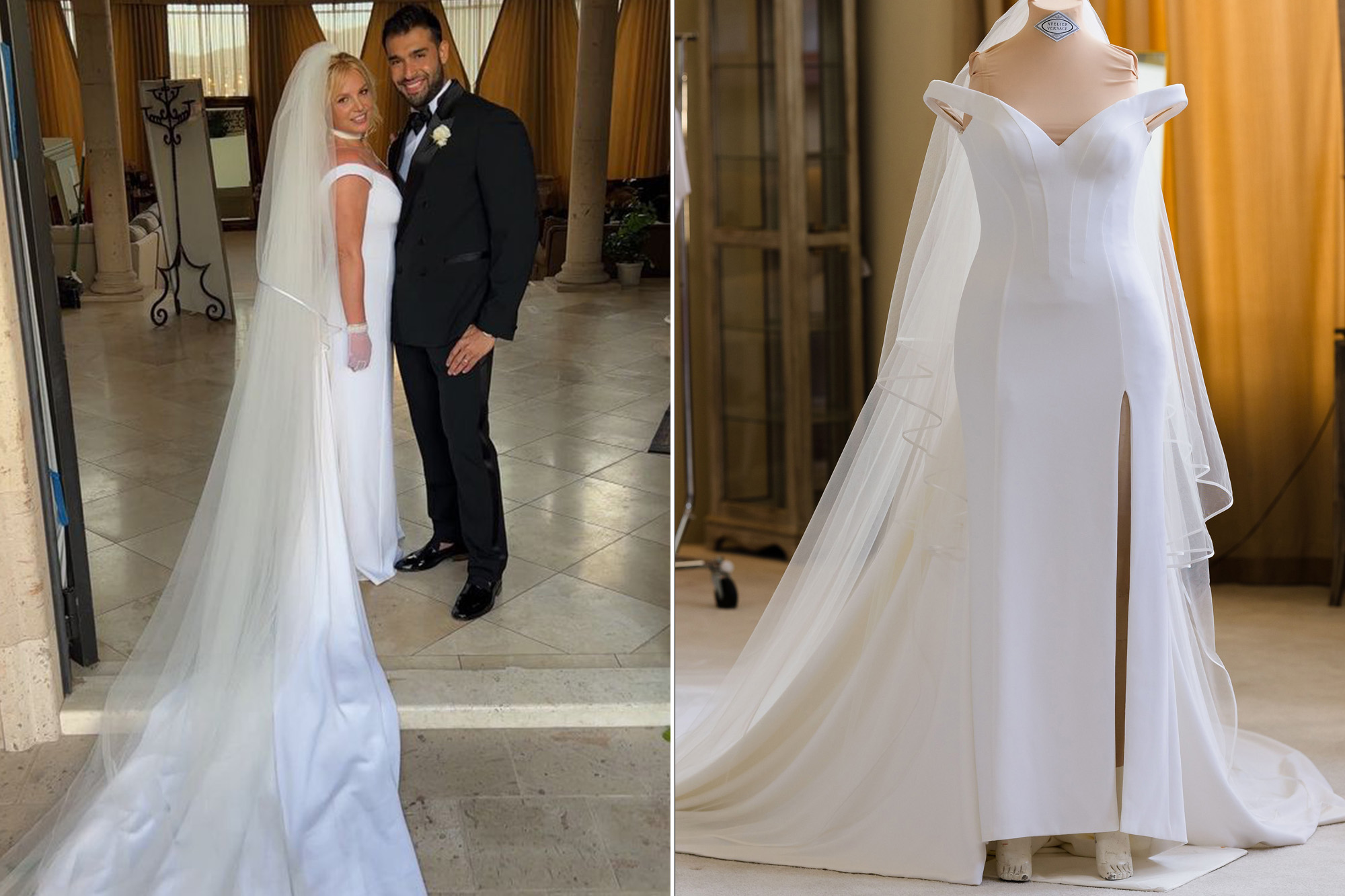 Britney Spears is a Versace bride.

The pop princess said “I do” to fiancé Sam Asghari Thursday at the couple’s home in Thousand Oaks, Calif., and walked down the aisle in a custom creation by Donatella Versace — with the designer herself among the guests in attendance.

Spears, 40, paired the dress with a nearly 15-foot-long white satin-edged veil, pearl-beaded fingerless mesh gloves and 62 carats’ worth of diamonds from Stephanie Gottlieb, who also provided the bride and groom’s wedding bands.

According to Vogue, the singer’s bridal bling included drop earrings set with round and pear-shaped stones, a heart-shaped diamond tennis necklace and an oval diamond tennis bracelet.

In addition to dressing Spears for her ceremony, Versace also provided her with not one, not two, but three reception looks: a black blazer-style mini, a red-hot fringed frock and a two-toned look, per Vogue.

The fashion house also outfitted Asghari, 28, in two different looks for the big day: a classic tux for the ceremony and a navy version for the party, the latter of which he wore with a black T-shirt that read, “Britney & Sam.”

She later changed into a red mini to party with pals including Madonna.Kevin Ostajewski/Shutterstock

Spears first shared the designer behind her dress in a since-deleted Instagram post in November, posing in a pale pink corseted ballgown and writing, “No … this is not my wedding dress 👗 bahahah !!!! Donatella Versace is making my dress as we speak 🤫 .”

In March, Donatella paid a visit to Spears and Asghari at their home, with the “Sometimes” singer sharing snaps and joking, “these 2 bad bitches are up to no good.”

Spears and Versace have a long history together; the fashion house dressed the music icon in two different sparkling styles for the 2008 MTV VMAs, and in 2002, Spears sat front row at Versace’s show in an unforgettable rainbow-hued gown.

“I’ll never forget when you came and stayed with me Britney, you were and will always be magical!!!!” Donatella captioned a snap of the pair at the show, praising the star’s “glamorous” look.

Notably, the designer was also among the major names who celebrated on social media when Spears’ conservatorship was finally terminated after 13 years in 2021.

Britney Spears in a Versace dress at the 2009 MTV VMAs.WireImage

“Freedom is a human right. My heart is smiling for you, Britney. Congratulations on your regained and deserved emancipation. I love you, your fierce fans love you and the world NEEDS your brilliance. Happy Britneypendence day!” Donatella wrote on Instagram at the time, sharing another throwback snap of the duo along with the hashtag #FreeBritney.

Spears and Asghari got engaged in September after nearly 5 years together, with the personal trainer presenting his bride-to-be with a “one-of-a-kind” 4-carat diamond ring by Roman Malayev.

The custom sparkler features a round brilliant center stone in a platinum cathedral setting, along with pavé detailing on the bridge and Asghari’s nickname for Spears, “Lioness,” engraved inside the band.

“The couple made their long-standing relationship official today and are deeply touched by the support, dedication and love expressed to them,” Asghari’s talent manager, Brandon Cohen of BAC Talent, exclusively told Page Six at the time.

Naomi Campbell stars in the Self-Portrait campaign
Julia Roberts in denim mini shorts boasted a toned figure
We use cookies on our website to give you the most relevant experience by remembering your preferences and repeat visits. By clicking “Accept All”, you consent to the use of ALL the cookies. However, you may visit "Cookie Settings" to provide a controlled consent.
Cookie SettingsAccept All
Manage consent