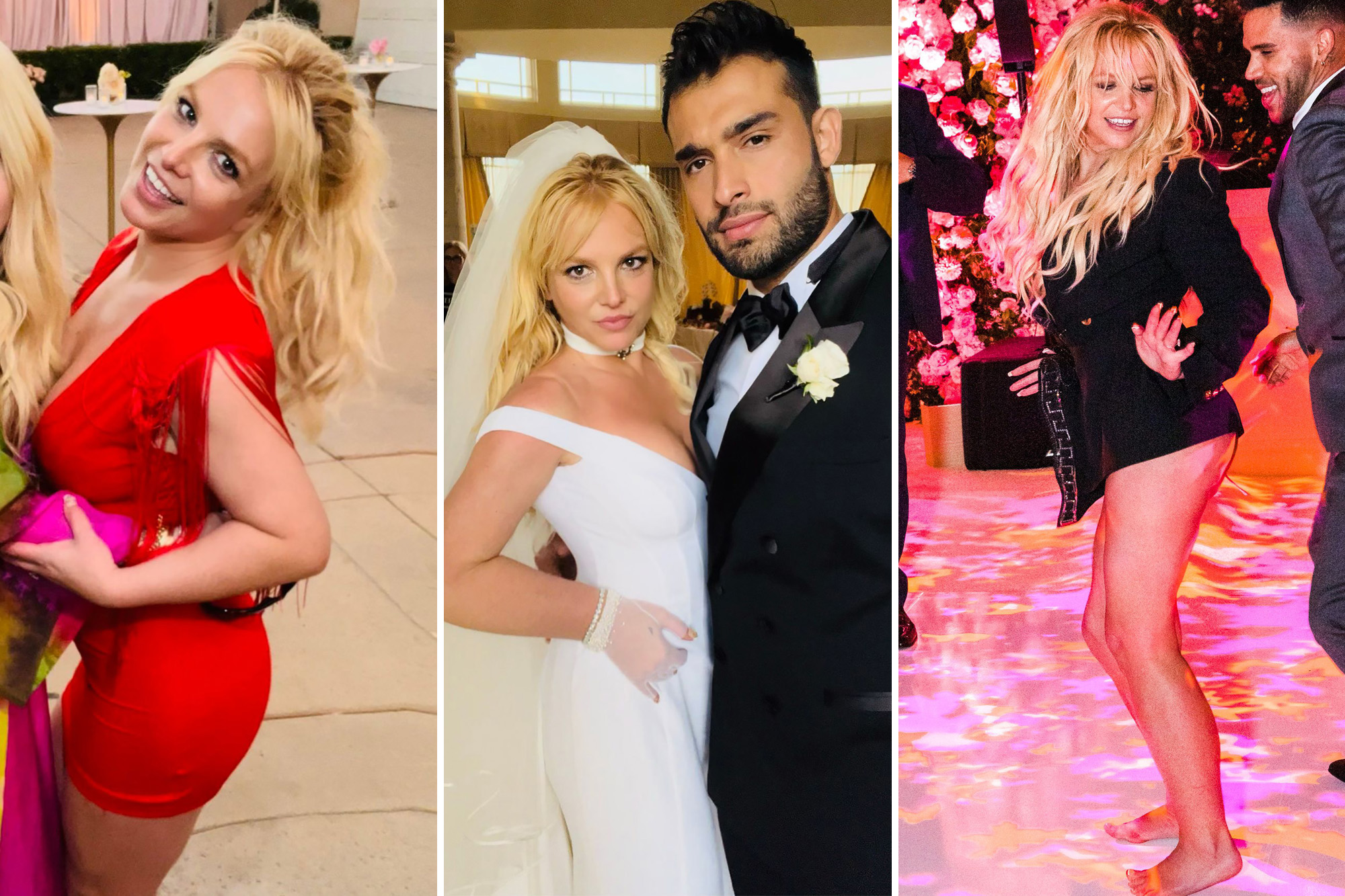 Britney Spears married Sam Asghari on Thursday in an intimate ceremony at their Los Angeles home, and the pop star didn’t disappoint when it came to delivering some memorable fashion moments.

While she went with a sleek, classic white custom Versace creation with a high slit and a traditional veil for the ceremony, she went a more classic Britney route for the reception festivities.

After the “I dos” were over, the “Toxic” singer changed out of her custom Versace wedding gown into three party-ready looks, all by the designer.

She kicked off the event — and her shoes — in a black blazer-style mini dress to dance the night away with pals like Madonna, Paris Hilton, Drew Barrymore and Selena Gomez.

The new Mrs. Asghari let her hair down on the dance floor in a black Versace mini.Kevin Ostajewski/Shutterstock

The long-sleeved, super-short dress featured glittering silver trim and button detail at the front, and the singer wore her hair in long, loose waves for her first reception look.

A peek at Spears’ fiery red two-toned reception look as she converses with Selena Gomez.Kevin Ostajewski/Shutterstock

According to Vogue, she then changed into a “two-toned outfit” before her final outfit of the night: a sassy red fringed mini.

Her second reception look included cap sleeves and flirty red fringe at the shoulders, and she added glittering silver heels to recreate her legendary kiss from the 2003 VMAs with Madonna.

Spears — who changed into a red mini dress — and Madonna recreated their infamous kiss at the wedding reception.Kevin Ostajewski/Shutterstock

Spears and Asghari met in October 2016 on the set of her music video for “Slumber Party” and officially announced they were a couple in January 2017. The two became engaged in September 2021.

Julia Roberts in denim mini shorts boasted a toned figure
Vanessa Hudgens in an electric blue dress with a flowing train and other guests of the MTV Movie & TV Awards 2022
We use cookies on our website to give you the most relevant experience by remembering your preferences and repeat visits. By clicking “Accept All”, you consent to the use of ALL the cookies. However, you may visit "Cookie Settings" to provide a controlled consent.
Cookie SettingsAccept All
Manage consent