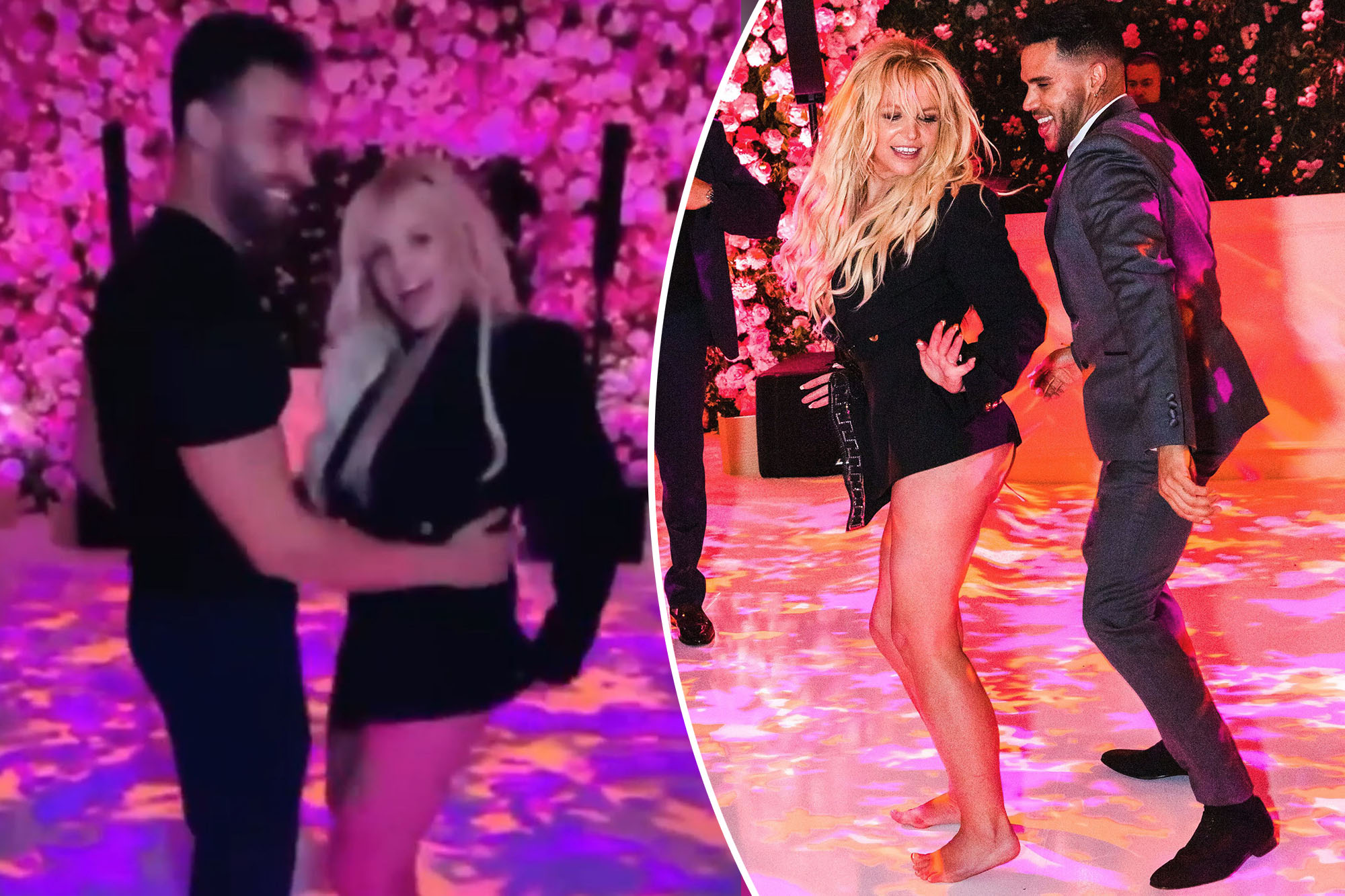 Britney Spears celebrated her marriage to Sam Asghari by dancing the night away in her undies.

The pop star, who tied the knot on June 9, revealed via Instagram on Saturday that she wore her “first diamond thong” during the star-studded reception.

Spears, 40, let fans in on the intimate secret when she shared a video of herself dancing in a black Versace blazer dress, which left little to the imagination.

“LIVING IS GIVING … pssss don’t worry I had my first diamond thong underneath my jacket … hope I didn’t offend anyone 😜😜😜 !!!,” she captioned a clip of the newlyweds busting a move during the wedding reception.

In addition to the suit-inspired micro-mini, Versace provided Spears with two more party looks: a two-toned outfit and a red fringed frock.

Meanwhile, Asghari, 28, sported a T-shirt emblazoned with “Britney & Sam” for the reception, and couldn’t seem to wipe the smile off his face the entire night.

Britney Spears, who wed Sam Asghari, danced the night away in a “diamond thong.”Instagram / @britneyspears

Elsewhere in the video, the “Toxic” hitmaker was seen dancing with Madonna as the Queen of Pop’s classic hit “Like A Virgin” played in the background.

“How surreal would that be! Jamming to Madonna and Madonna is there lol,” one fan commented, with another adding, “Ok. That’s pretty rad. Madonna dancing to her own song at your wedding. Wow.”

Spears danced the night away with guests including Willie Gomez.Kevin Ostajewski/Shutterstock

Paris Hilton, Selena Gomez, Drew Barrymore and Donatella Versace – who designed Spears’ wedding dress – were among the celebs in attendance.

“So many incredible people came to our wedding and I’m still in shock !!!” Spears gushed in another post shared to Instagram.

“@drewbarrymore my girl crush and @selenagomez who btw is way prettier in person if that’s possible both came !!! I was speechless … I kissed @madonna again and we danced into the night with @ParisHilton.”

Notably missing from the nuptials were the singer’s parents, Lynne and Jamie Spears, who did not score an invite following their falling out with the singer over her conservatorship, which was terminated in November 2021.

“You look radiant and so happy!” Lynne commented on Britney’s Instagram post from Friday. “Your wedding is the ‘Dream’ wedding! And having it at your home makes it so sentimental and special! I am soooo happy for you! I love you!”

Britney and Asghari met in October 2016 on the set of her music video for “Slumber Party.”

The two made their romance public in January 2017 and became engaged in September 2021.

Celine to present collection at Paris Men’s Fashion Week
Tony Awards red carpet 2022 live updates: All the best-dressed stars
We use cookies on our website to give you the most relevant experience by remembering your preferences and repeat visits. By clicking “Accept All”, you consent to the use of ALL the cookies. However, you may visit "Cookie Settings" to provide a controlled consent.
Cookie SettingsAccept All
Manage consent