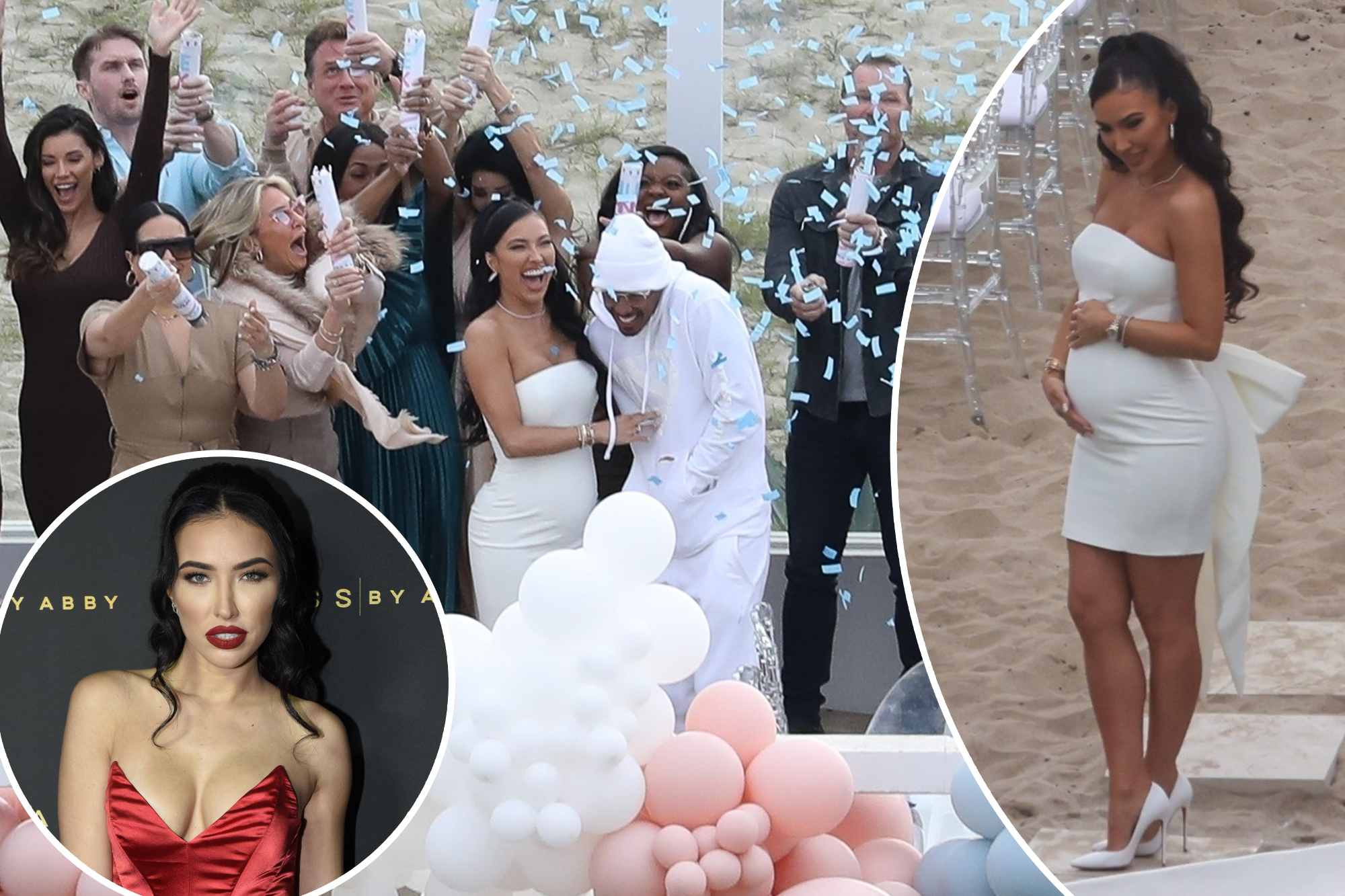 Is eighth time a charm for Nick Cannon?

It appears the TV host may be expecting another child, as he hosted a gender reveal party with Johnny Manziel’s ex, Bre Tiesi, in Malibu, Calif., on Saturday.

Pics from the party show Cannon, 40, and a pregnant Tiesi, 30, gathered together with a small group of friends and surrounded by pink and blue balloons.

Tiesi – who recently finalized her divorce from Manziel – was photographed cradling her baby bump in a white bodycon dress with towering stilettos.

Cannon matched Tiesi (whom he worked with on “Wild N Out”) in a white ensemble of his own, consisting of a hoodie, sweatpants, sneakers and a beanie.

Surprise! Bre Tiesi is pregnant and expecting her first child.BACKGRID

Photos from the event also show guests popping open confetti cannons, which shot blue confetti into the air to reveal Tiesi is expecting a baby boy.

This will mark the first child for Tiesi. Reps for Cannon and Tiesi did not immediately respond to Page Six’s request for comment.

Guests shot blue confetti into the sky to reveal Tiesi is expecting a baby boy.BACKGRID

The party pics come months after Cannon revealed he had gone celibate following the advice of his therapist. He welcomed four children with three different women in under a year, telling “Drink Champs” hosts DJ EFN and N.O.R.E. in October that he was “going to see if [he] could make it to 2022.”

Tragically, Cannon lost his 5-month-old son Zen, whom he shared with ex Alyssa Scott, to brain cancer in December.

Tiesi and Cannon were all smiles at the event, which was held on the beach in Malibu.BACKGRID

“This weekend I made a valid effort to spend the most quality time I could spend with Zen. We woke up on Sunday … and [went] to the ocean … and then I had to fly back to New York for the show,” Cannon said on his eponymous talk show at the time.

“By the time I got in the car and was headed to the airport, I had to turn around.”

They were surrounded by a group of friends and pink and blue balloons.BACKGRID

Tiesi was previously married to NFL star Manziel, but the romance was short lived. The pair got engaged in 2017 and quietly wed in 2018 at a California courthouse.

Six months later, she filed for divorce and scrubbed Manziel from her Instagram page commenting that “vows were broken.”

Braunwyn Windham-Burke celebrates 2 years of sobriety
Farrah Abraham moving out of California, ‘suicidal’ after arrest
We use cookies on our website to give you the most relevant experience by remembering your preferences and repeat visits. By clicking “Accept All”, you consent to the use of ALL the cookies. However, you may visit "Cookie Settings" to provide a controlled consent.
Cookie SettingsAccept All
Manage consent