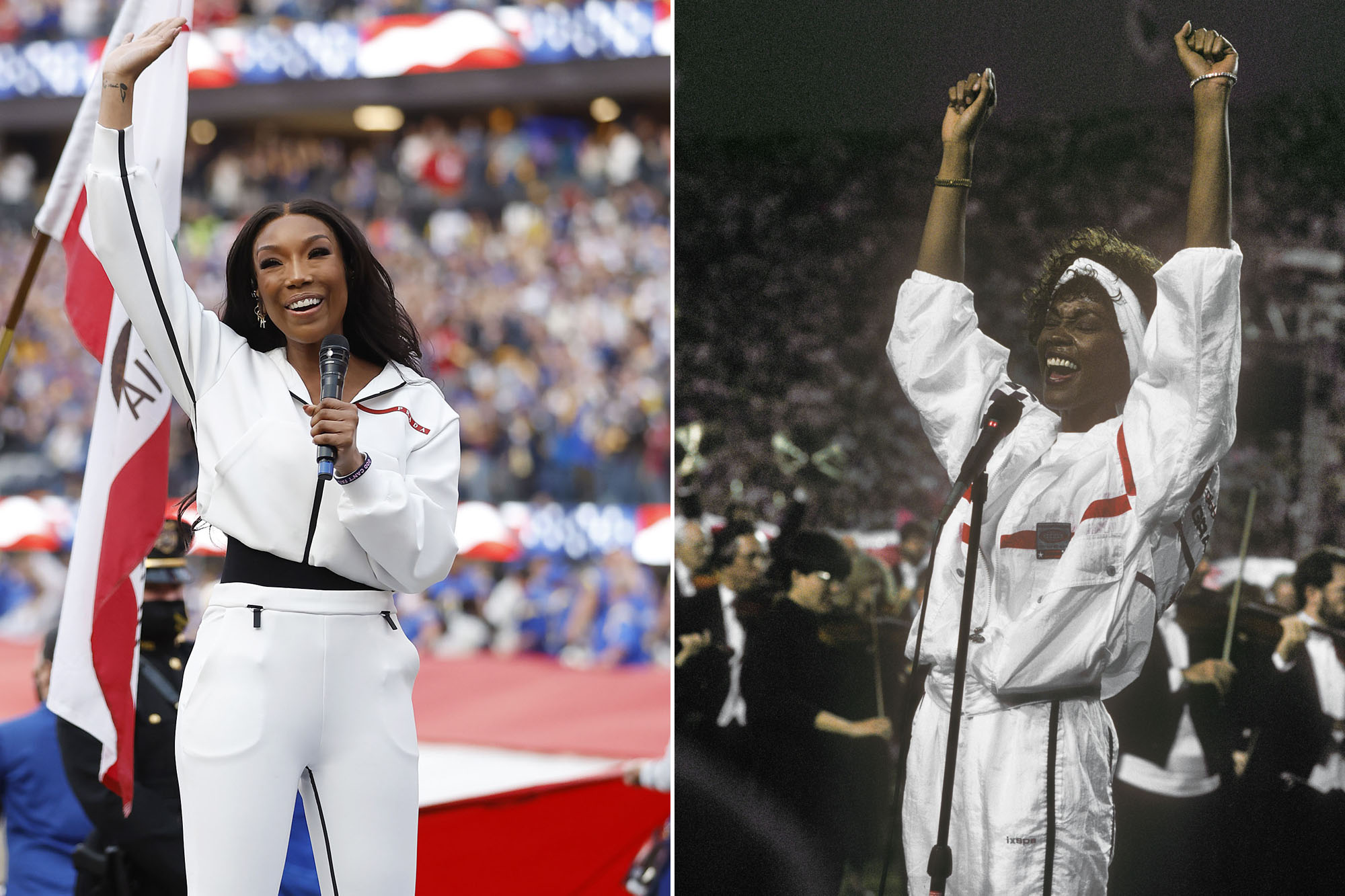 Brandy gave a sartorial salute to her late idol, Whitney Houston, while performing the national anthem at Sunday’s NFC Championship game between the Los Angeles Rams and the San Francisco 49ers.

While singing “The Star-Spangled Banner” at at SoFi Stadium in Inglewood, California, the Grammy winner donned a white Prada tracksuit with black trim and red accents, recalling the similar style Houston wore to perform at the 1991 Super Bowl.

Her homage didn’t go unnoticed by fans. “One thing about Brandy, she’s gonna always find a way to pay homage to Whitney Houston,” one tweeted.

Another pointed out the degree of detail the 42-year-old put into her look, writing, “Down to the cross earrings. Brandy don’t play about her Whitney!!”

Brandy and Houston, who died in 2012 at the age of 48, co-starred in the 1997 movie musical “Rodgers & Hammerstein’s Cinderella,” with the former taking on the titular role and the latter playing her Fairy Godmother.

“I’ve been asked about Whitney so many times, and I still cannot find the words to describe what that experience was like,” Brandy told Page Six of her late mentor in 2021. “I spent my whole life trying to meet this woman, to feel her essence and her presence. To finally get to sing with her, to work with her, it was unbelievably surreal.”

Even Brandy’s cross earrings were a nod to Houston.Getty Images

Continued the “Have You Ever” singer, “At the same time, I felt so safe to be myself. Once all the giddiness wore off and it was time to be a professional and bring what I needed to bring to the table, she made me feel comfortable enough to be able to do that. If she didn’t, I probably would’ve froze or something. She gave me the confidence to put my best foot forward.”

Beyoncé’s Ivy Park Valentine’s Day collection is coming
Chrissy Teigen unveils new blue elephant wrist tattoo
We use cookies on our website to give you the most relevant experience by remembering your preferences and repeat visits. By clicking “Accept All”, you consent to the use of ALL the cookies. However, you may visit "Cookie Settings" to provide a controlled consent.
Cookie SettingsAccept All
Manage consent