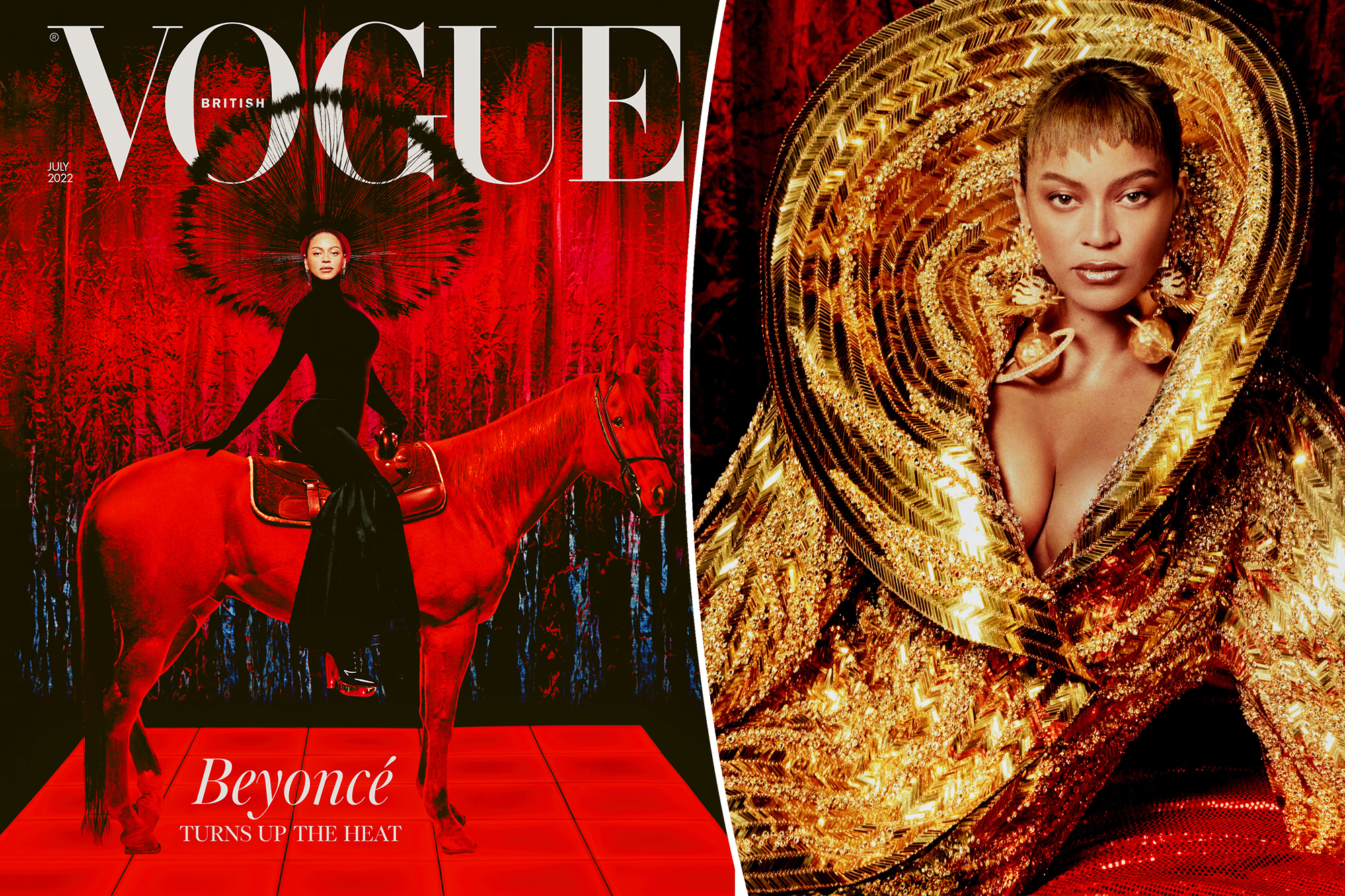 The iconic singer sent shockwaves through her fan base Thursday when she announced her next album, called “Renaissance,” will be released July 29.

Editor-in-chief Edward Enninful described the inspiration for the photo shoot as “a fashion fantasia spun from the tropes of club life during the last century’s final quarter” including “mirror balls, light boxes, headdresses.”

He added that Beyoncé “wanted to play with fashion like never before.”

In the pages of the magazine, the Grammy winner, 40, wears a gold sequin-covered sculptural coat by Schiaparelli Haute Couture paired with matching planetary earrings from the brand. She finishes the celestial look with choppy bangs and a golden lip color.

She also wears a silk corset, sequined leggings and silk train, all by Harris Reed, accessorized with a pink version of the designer’s feather headpiece and platform boots made in collaboration with Roker while sitting atop a large disco ball in another shot.

Bey is a disco queen, sitting atop a mirror ball with another hanging on the ceiling and wearing a silk corset with sequin leggings.beyonce/Instagram

Lastly, in a turn towards the goth, Beyoncé poses atop a motorcycle in an all-leather look, including a patchwork leather jacket by Junya Watanabe, Commando vinyl leggings, Harris Reed & Roker platform boots and a beaded leather headpiece with silver studs by Malakai.

If these looks are any indication of Bey’s new era, it’s sure to be glamorous and playful.

In an edgy shot, she sits atop a motorcycle in an all-leather look.Rafael Pavarotti

The superstar hinted at the title of her seventh studio album last year in an interview with Harper’s Bazaar, saying, “With all the isolation and injustice over the past year, I think we are all ready to escape, travel, love, and laugh again.”

“I feel a renaissance emerging, and I want to be part of nurturing that escape in any way possible,” she said.

Ana de Armas shares first look as Marilyn Monroe in ‘Blonde’
Kourtney Kardashian helped Travis dress better
We use cookies on our website to give you the most relevant experience by remembering your preferences and repeat visits. By clicking “Accept All”, you consent to the use of ALL the cookies. However, you may visit "Cookie Settings" to provide a controlled consent.
Cookie SettingsAccept All
Manage consent