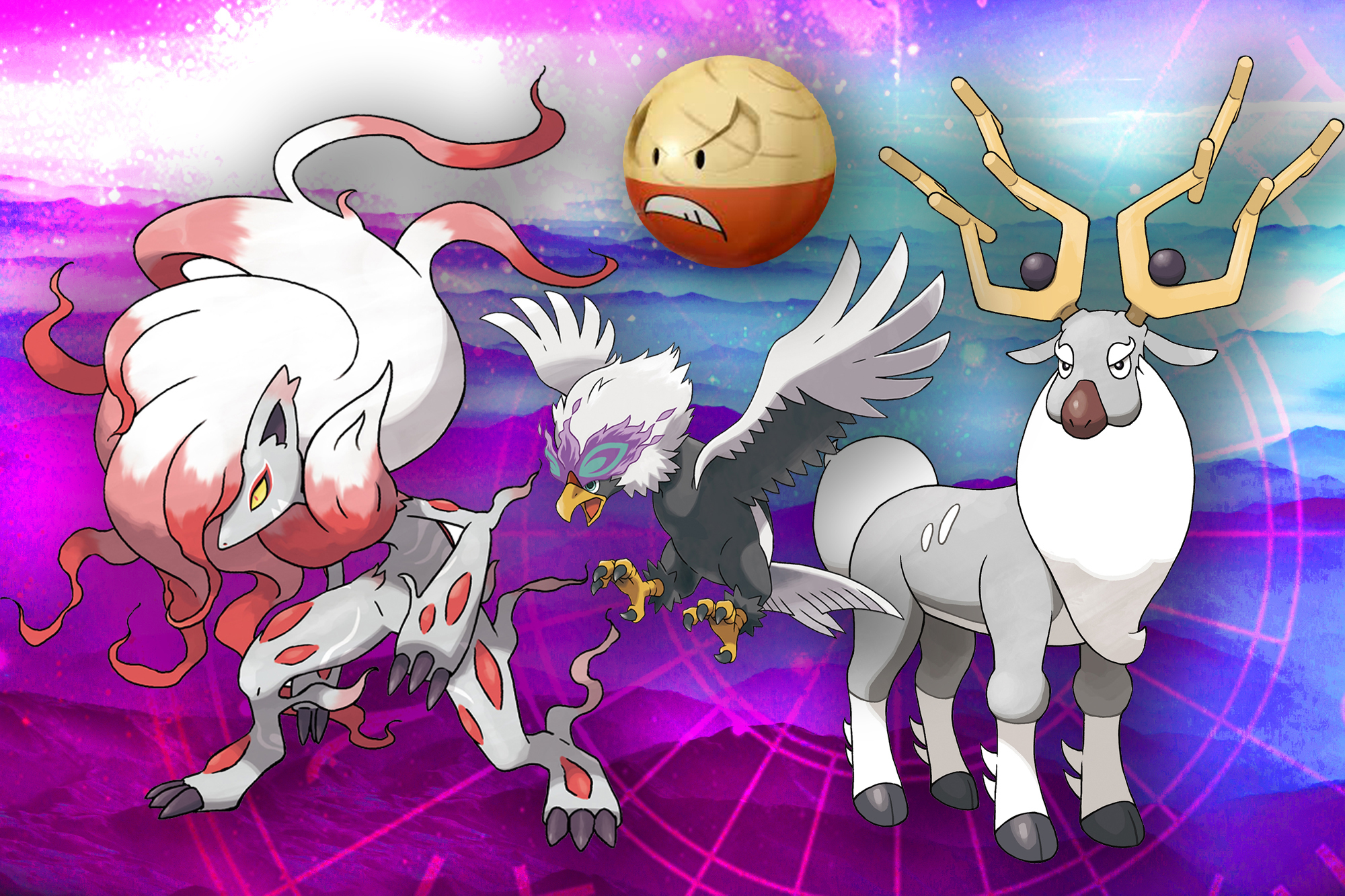 The time has come!

Slated to be one of the biggest releases in video game and media history, Pokémon Legends: Arceus is set to take the world by storm.

As the highest-grossing media franchise in the world — worth $100 billion since it was created in 1996 — the series owned by Nintendo and Game Freak is about to break ground with a whole new spin on the “gotta catch ’em all” formula that made it so famous in the first place.

Known as a media empire that includes games, television, films, anime, books, manga comics, music, merchandise and more, the franchise is set for Pokémon Legends: Arceus to breathe new life into it. Whether you’re a fan of Ash Ketchum, Pikachu or any of the recent games — such as Brilliant Diamond or Shining Pearl — and enjoyed playing through Kanto, Johto, Hoenn, Sinnoh, Unova, Kalos, Alola or Galar, more journeys lie ahead!

Luke James — one of the rising voices in geekdom in America and a Pokémon veteran — spoke exclusively with me and The Post to help create the definitive list of Hisuian Pokémon that aligns with astrology and the zodiac. (Follow Luke James for everything that’s hot.)

What should we know about the creatures you’ve chosen to identify each zodiac sign with from Pokémon Legends: Arceus?

“This game is epic — and the new Hisuian forms are unique to the region. Hisui is the land on the Pokémon planet that pre-existed before the continent became called Sinnoh. Pokémon Legends: Arceus is set in the past, and in order to celebrate the release of the new game, Nintendo decided to give us what we want—variant forms of some truly incredible creatures. In this article, I wanted to only work with Hisuian variants. I took all the information I could find, plus used some of my inside knowledge about the game and created this list for everyone. I’d love to hear what people have to say as they play through the game.”

Kleavor links with an Aries.Pokémon

Kleavor, the new evolution of Scyther, is an aggressive Pokémon that brandishes its crude axes with pride as it flies toward you at alarming speeds. Being the first of many Noble Pokémon within the game, it’s ready to tackle any battle head-on with any foe ready to face it. Aries, like Kleavor, are very impulsive and aggressive, ready to take on any task.

Ursaluna, a newly discovered evolution to our beloved Ursaring, has adapted to the harsh environment of Hisui and, in doing so, has become one of the Alphas in its province. Despite Ursaluna’s new burly physique, this Normal/Ground Pokémon is immensely strong yet stubborn like an ox or bull. Many Taureans possess strength vitality like this apex beast of a Pokémon.

Braviary harnesses the spirit of a Gemini.Pokémon

One of the fastest birds in its region, Hisuian Braviary grows impatient if it is stuck in one place for too long. This Pokémon loves to take flight to the skies and move wherever the wind takes it, just like a Gemini. Braviarys are also very vocal and love to emit a bloodcurdling scream when on the hunt. Like Braviary, Geminis are very spontaneous and always want to be soaring in vast new directions at a moment’s notice.

Hisiuan Goodra has now donned a shell upon its back and, with this shell, it has been given the ability to control just how hard it wants its guard to be. Goodras are extremely clingy to their trainer and have a love-hate relationship with solitude. When it grows attached to a trainer, it will run rampant if it ever leaves its side or if anything terrible happens to this person. The protective nature of this Pokémon is very similar to that of a Cancer.

Hisuian Arcanine is perfectly connected to a Leo.Pokémon

Hisuian Arcanines are stunning and majestic creatures that are known to sit at the peaks of mountains, overlooking their kingdom. During large snowstorms, Arcanines are known for being compassionate and helpful towards lost travelers and will help guide them to safety. Confident yet daring, Hisuian Arcanine aligns deeply with Leos.

Unlike Lilligant’s original form, Hisuian Lilligant has grown well-developed legs due to navigating to the vast and difficult expanse of the Hisui region. Despite its newfound beauty, Lilligant can pack quite the punch (or kick, rather) to any foe that threatens it. In doing so, Lilligant has developed quite a loyal relationship with its trainers, closely mirroring the resilience of a Virgo.

Alluring and beautiful, this new Pokémon is known for charming everyone and everything that it meets. As it is known to cause winter, it can bring brisk ice and snow to the Hisui region. Enamorus, native to this grand land, fuels so much love and protection into the climate that it breathes fresh life throughout all of Hisui. Like Enamorus, Libras exude enchanting skills.

Hisuian Zoroark is a Scorpio.Pokémon

Though immensely aggressive and intimidating, this Pokémon of illusion has the ability to drive a stranger mad with terror. However, Zoroark has a very special soft spot for anyone in its inner circle and will go to great lengths to ensure their safety. This same ferocity aligns greatly with Scorpio.

Sagittarius most closely aligns with Wyrdeer.Pokémon

Sagittarius and Wyrdeer are both extremely adventurous and free-spirited. There isn’t a place in the world where Wyrdeer can be stopped from treading. Wyrdeer are spontaneous and quick, having very few limitations when it comes to traversing the land of Hisui.

Capricorn is represented by a Sneasler.Pokémon

Sneasler is a very daunting and strategic opponent. With its newfound ability to expel lethal toxins from its claws, Sneasler becomes an extremely strong heavy-hitter. Cautious, cold and calculated, this docile Pokémon is able to traverse any terrain and, like a Capricorn, is able to climb any mountain it sets its eyes on so long as they focus their ambition.

Hisuian Voltorb is the symbol for Aquarius.Pokémon

The anatomy of Hisuian Voltorb is oddly mechanical, mirroring a Pokéball. When threatened, Voltorb springs into action and can channel enough energy comparable to 20 lightning bolts simultaneously. This makes it a devastating and explosive opponent. Aquarians, like Voltorb, are very calculated and possess a logical and detached nature.

Pisces is connected to a Basculegion.Pokémon

Basculegion is infused with strength and perseverance. Bonded to the souls of those they lost before them, Basculegion is one of the lucky few that manages to survive its journey upstream. Basculegion is seen leaping from streams and rivers, radiating joy from a hard task fulfilled. Despite its appearance, Basculegion are kind-hearted and sensitive, as well as nostalgic. Pisces exude a similar mystical nature.

Special thanks to Luke James for collaborating with me on this article! Be sure to check out which national Pokémon aligns with your zodiac sign, too!

Luke James is an artist and cosplayer with a special soft spot for everything MCU. He’s all about everything in geekdom, especially Avatar and Pokémon. In his spare time, he’s either in the gym hitting the weights or learning chaos magic in practice to become the next Scarlet Witch. Professionally he protects the public by being a real-life superhero as a firefighter.

Kyle Thomas is a globally recognized pop culture astrologer who has been featured in “Access Hollywood,” E! Entertainment, NBC & ABC television, Cosmopolitan Magazine, Hulu, Bustle, Elite Daily, Marie Claire and more. He is known for his cosmic guidance for celebrities, business executives and prominent influencers. His work harnesses the power of the stars in regards to entertainment lifestyle and trends affecting people worldwide. For more information, visit KyleThomasAstrology.com.