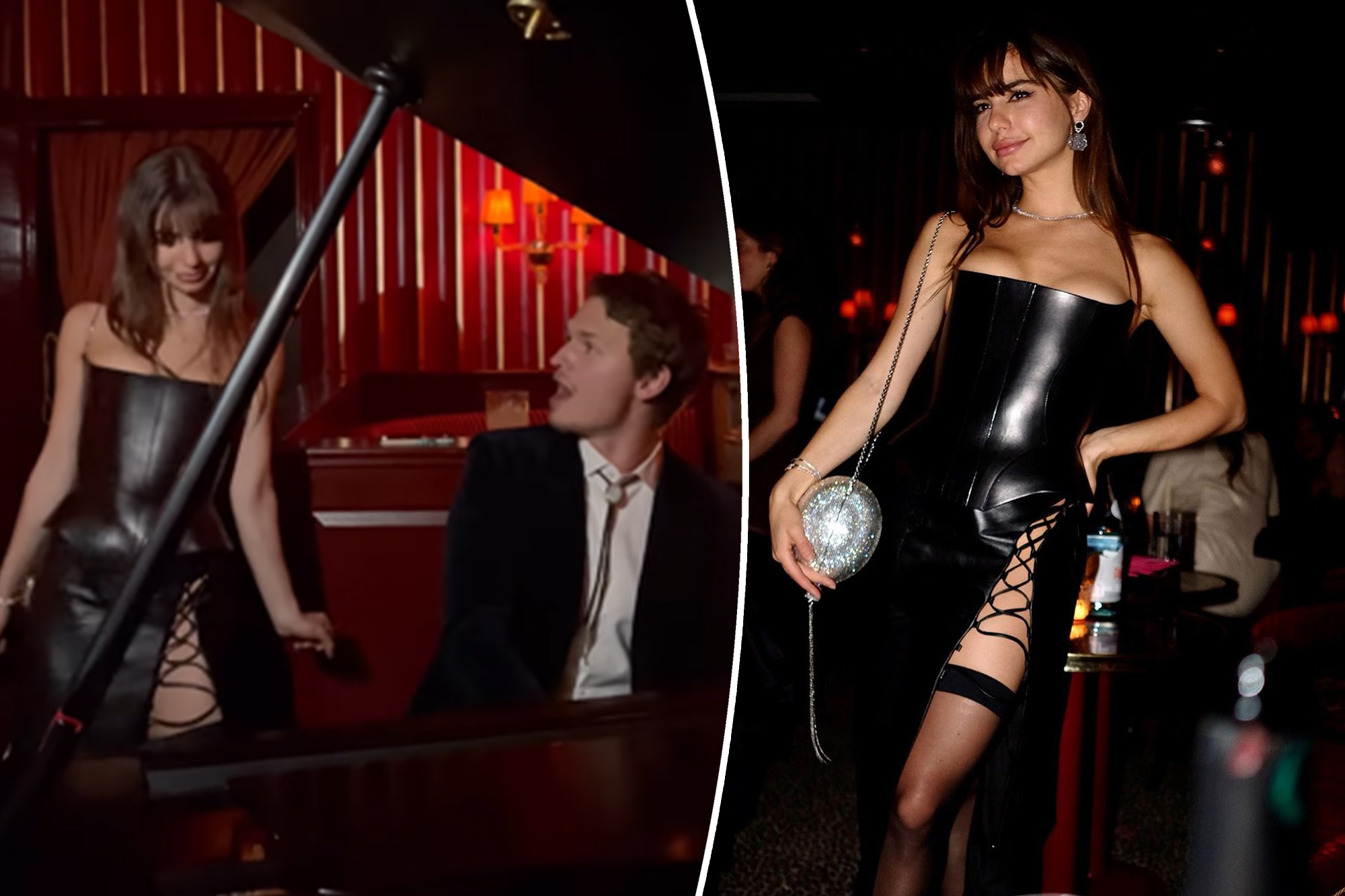 Elgort, 27, was spotted romantically serenading the ballerina Friday night for her 26th birthday celebration at the new NYC hotspot The Nines.

The “Baby Driver” star played the piano in a black suit while crooning to Komyshan, who wore a formfitting black dress with a dangerously high slit, at the elegant supper club.

Pals posted clips of the impromptu performance to their Instagram Stories in which the couple were also seen hugging.

Komyshan’s birthday bash was themed “Violetta’s Burlesque,” according to the invitation.

The night started with dinner at Soho restaurant Balthazar before moving to burlesque theater The Slipper Room and ultimately to The Nines, which recently opened in the former Acme restaurant space.

Sometime during the night, Komyshan found time to pose for a picture outside on the hood of a lime green Maserati.

The birthday girl took a break from the bash to pose on the hood of a lime green Maserati.violetta/Instagram

A source told Page Six in September 2021 that Elgort and Komyshan were “together but not,” adding, “It’s complicated.”

But when the pair attended his “West Side Story” premiere in November, they certainly seemed cozy. They also appeared to ring in the new year as a couple in the Bahamas, though they didn’t post pictures together.

Elgort and Komyshan — who briefly split in 2014, according to Us Weekly — met while they were both attending LaGuardia High School in New York.

Komyshan celebrated her birthday in style with a “burlesque” theme.violetta/Instagram

Their latest outing came at The Nines, which just officially opened and has been described by the New York Times as “sumptuously done in scarlet and swathed in corduroy.”

The place has “a small bar and lounge at the entrance,” according to the Times. “Then, behind a lush curtain is the main dining room with another bar, seating for 70 and a piano.”

Komyshan’s party started at Balthazar and ended at The Nines.violetta/Instagram

That caviar potato has already been getting as much Instagram love as the starry clientele. Socialite and DJ Hannah Bronfman posted a pic of the swanky spud with the caption, “Bringing the Parisian flair.” The place has also been visited by Vogue lifestyle writer Elise Taylor.

There is buzz that the hotspot’s piano could attract more stars to sit in and tickle the ivories.

The new space was masterminded by Jon Neidich and Golden Age Hospitality, the group that’s also behind Le Crocodile, Bar Blondeau, the Happiest Hour and other spots. Acme’s subterranean bar and lounge also remain at the space.

The Nines’ caviar potato is getting props from the likes of Hannah Bronfman.violetta/Instagram

Neidich told the Times, “Acme was closed for 14 months due to the pandemic. It had a good run, and when we signed a new lease I decided to change it into something different.”

The space is reportedly inspired by old-school “high-end New York and lobby bars in grand hotels.”

David Adefeso Is Heading Back To The Desert And Fans Are Intrigued
Playboy responds to ‘abhorrent’ allegations in ‘Secrets’ docuseries
We use cookies on our website to give you the most relevant experience by remembering your preferences and repeat visits. By clicking “Accept All”, you consent to the use of ALL the cookies. However, you may visit "Cookie Settings" to provide a controlled consent.
Cookie SettingsAccept All
Manage consent