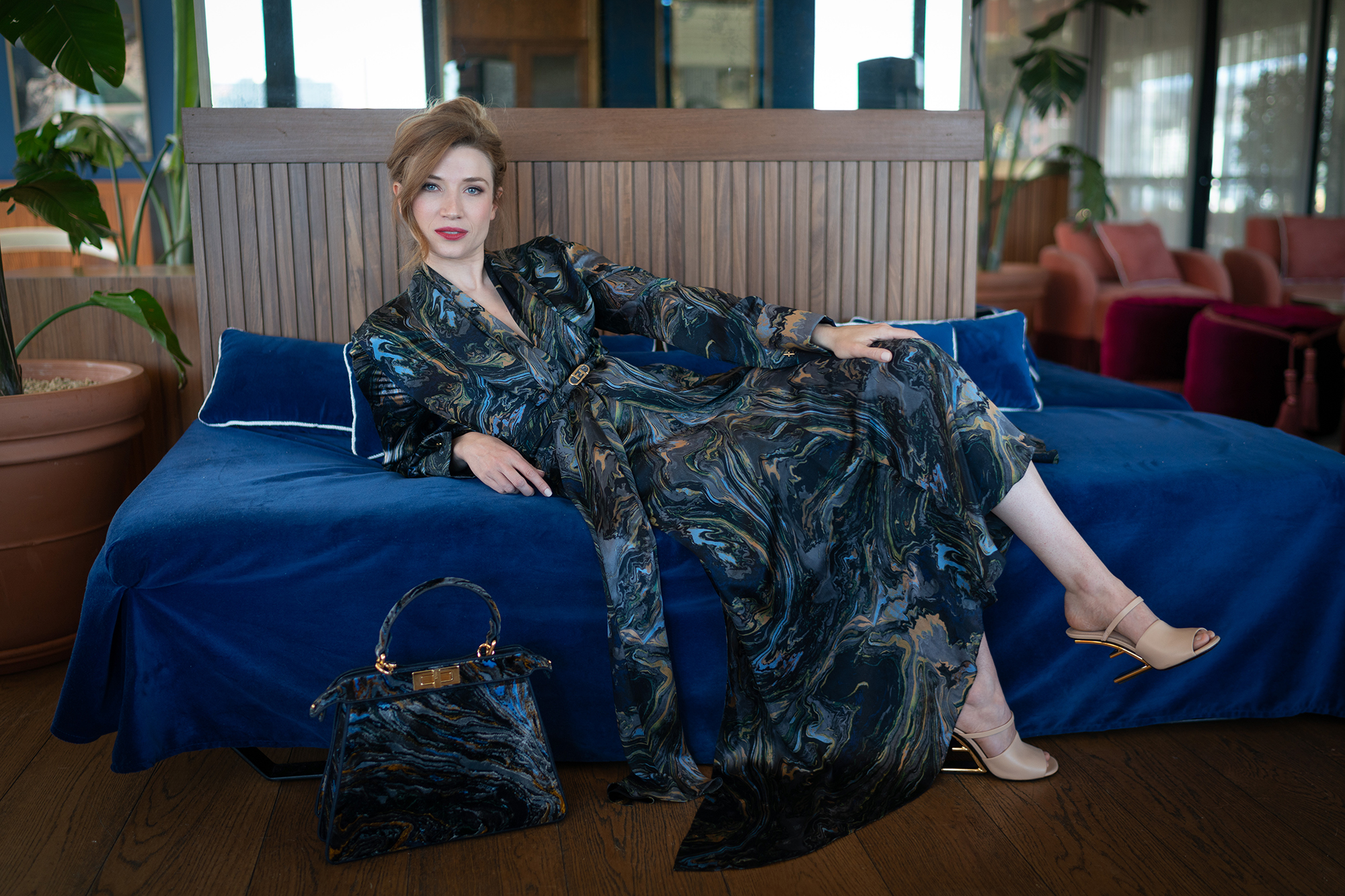 It didn’t take long for actor Amanda Jaros to feel like an actual pioneer during the grueling, months-long shoot of the new western “1883.”

“We shot in Texas and Montana in just crazy conditions,” said the head-turning star. “Winds so strong that some of the cast and crew tents went flying. Freezing cold temperatures, sweltering heat. One stunt double got hypothermia in the cold waters we were immersed in in episode four.”

“But there’s something to be said for putting yourself through difficulty and surviving.”

Jaros, cast as the heroine Alina in the Paramount+ prequel to its mega hit series “Yellowstone,” underwent three weeks of cowboy camp, where she learned to ride and rope — and experience the kind of rugged conditions the trailblazers of the time had to endure.

“I did struggle with my vanity on this show,” she said with a laugh, recalling that she needed to get comfortable with not shaving her legs or arms.

“But I told the hair and makeup department, ‘Go ahead and make me look hideous!’ Trust me, Alina was not concerned with how she looks.”

One day during filming amid dusty, sweaty conditions, she was introduced to a producer of the show, Michael Friedman.

“Michael said, ‘Oh, hello. What do you do?’” said Jaros, a striking, strawberry blonde who is hard to miss when not in character.

“I thought that was such a compliment.”

Jaros, a single Angeleno who has been described as “20-something” but has steadfastly not revealed her date of birth or age, has become skilled at a range of roles — an upper-class Brit on “NCIS,” a 1960s hippie chick on “Fall Into Me” and a junkie on an episode of “Castle” — something she’s wanted to master since first taking the stage in high school.

“I knew I wanted to play wildly different characters. I never felt like the ingenue. I always felt like a character actor — and it’s been really fun to have somewhat succeeded in that.”

Jaros’ character, a married Eastern European, has fled the old world with her husband and they pursue a new life in the rugged American West. She has to learn how to handle a carriage, how to ride for miles at a time, how to cross rivers.

Often in tattered clothes, coated in muck and grime.

All of which Jaros embraced after volunteering to do her own stunts.

“I didn’t know what I was getting into,” she laughed.

“On my hardest day, I had to do a lot of takes of an exhausting climb up a mile high hill. Eventually my body just gave out. I had to tell production, ‘If we’re doing more takes of me running up that hill for a mile, I’m going to need a vehicle to transport me.’”

She learned that another sacrifice was required.

The show’s creator, Taylor Sheridan, asked Jaros and a few other actors who play immigrants to not shave their arms or legs.

“It’s because of close-ups,” she said. “Sure, it became uncomfortable. It was fine for Alina — but I wanted to wear tank tops on my days off.

“I was only self-conscious when I wasn’t in character. Eventually, I just had to embrace it. The night I wrapped, the very first thing I did was hop in the shower and shave!”

One aspect of Alina was familiar to Jaros: her heritage.

The character has an accent the show’s creators call Balkan — a blend of Eastern European, Romanian and Slovakian.

“Luckily I played a Czech immigrant in ‘My America,’ which is close. My dad’s sideof the family is Czech so I thought I could get it.

“As I kid, I’d try and impersonate what I saw on TV,” she added. “I can pull most out of my hat: British, Southern Texas, the Carolinas, Minnesota, Staten Island, Brooklyn. I’m drawn to character parts and accents have given me that opportunity.”

“They’re all delightful,” she said.

“I had the privilege of working with Tim and Faith from the beginning of cowboy camp. They were always so kind.” The fact they agreed to do the show “is what allowed it to happen,” she added.

“Sam Elliott was a dream to work with, so sweet and humble. It was taxing for all our bodies, emotional states, energies — it was a real team effort.”

Jaros isn’t just having a good winter — she’s having a spectacular one.

She is also starring in the ABC true story “Women of the Movement,” a Civil Rights period drama in which she plays the wife of one of the white men who murdered a young black man, Emmett Till, in the 1955 notorious case.

Viewers of “1883” will hardly recognize Jaros in “Women of the Moment,” as she dons slim-waist dresses and fire-red lipstick and wears her hair tightly coiled.

“I felt much prettier on this show,” she laughed.

Though currently a small-screen darling, Jaros is eyeing Hollywood feature films, hoping to produce, maybe even direct, while also continuing to act.

“Plans are in place,” she said coyly.

The cast of “1883” filmed in Texas and Montana in rugged outdoor conditions.Instagram @AmandaJaros

Meanwhile, she is looking forward to how things go with “1883,” which airs its season finale on Feb. 27.

“I think the ‘Yellowstone’ fan base is so excited about this show that I’d be really surprised if it didn’t get picked up for a second season,” she said.

It takes one to know one.