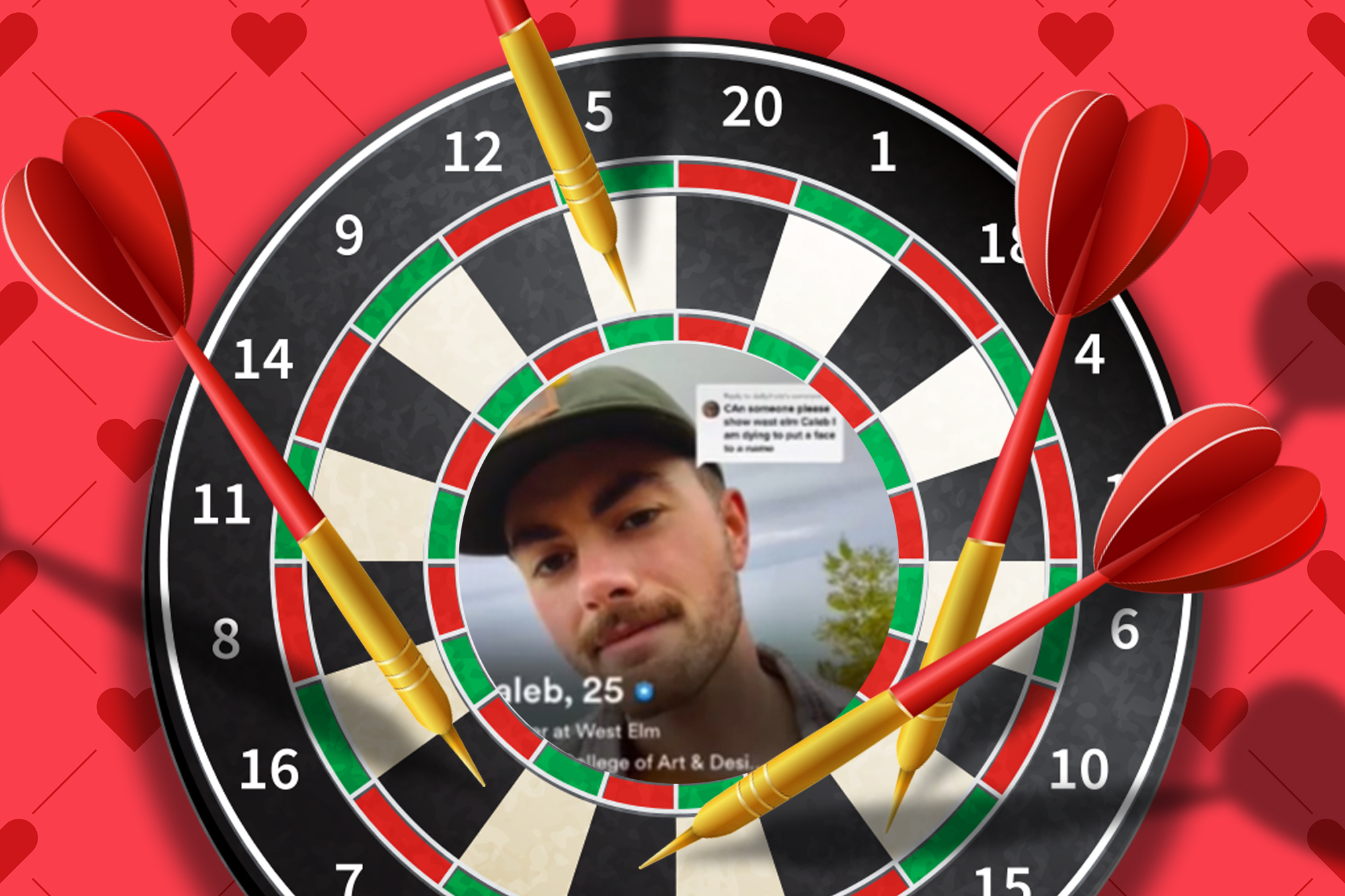 The internet hive whipped itself into a frenzy last week over an alleged 25-year-old heartthrob, a serial ghoster on the Hinge dating app who was convicted by the buzzing masses of being … kind of rude!

However, what started as a seemingly relatable TikTok moment ended up becoming one of the digital realm’s most raging debates, with more overwrought think pieces devoted to Caleb’s perceived culpability — and/or possible innocence — than the US’s withdrawal from Afghanistan.

There, the legend of New York City’s most eligible f – – kboy, West Elm Caleb, was spun: He is allegedly a young, lightly mustachioed furniture designer named Caleb with a nasty habit of aggressively wooing his dates before disappearing from their radars.

Often, TikTok legend has it, he sees more than one woman a day.

The Post has attempted to reach out to Caleb and his supposed high-end home furnishings employer (which has a dedicated online “influencer” PR rep) to hear their side of the story.

So far, dead silence. Wait, has Caleb ghosted us, too?

Alas, it remains to be seen if the object of half the internet’s collective rage is even real. Some social media watchdogs are crying hoax — and the masses are listening.

In fact, the woman credited with instigating the conversation says that she’s never met the storied West Elm Caleb — but her own disappointing date with another Caleb prompted an onslaught of commiseration from other women in NYC.

The original TikToker outing “West Elm Caleb” admitted that she had never met *the* “West Elm Caleb” — but that many women had contacted her about the same man, leading her to share their stories in the hopes of calling out a serial ghoster.Courtesy of @meemshou

Caleb eventually became somewhat of a quickie viral mascot — or folk anti-hero — for the dreadful realities of online dating. If you’ve ever been single in this day and age, you know a West Elm Caleb. He’s the one who never texted back after a seemingly amazing first date, leaving no explanation as to why he wouldn’t follow up after going out of his way to charm.

As the online explainers rolled in and the hot tweets fired off, so too came the intelligentsia’s raging hot think pieces. By Friday and into the weekend, inboxes were flooded with SubStack newsletters from writers breathlessly intellectualizing Caleb’s actions and the reactions to it.

First, Caleb seemingly deserved our wrath. According to Julie Krafchick, co-host of the podcast “Dateable” with Yue Xu, dating apps provide an “anonymity that allows people to do things” they wouldn’t do otherwise.

“If your aunt sets you up with someone, you’re not going to ghost that person,” she told NBC News in an interview about West Elm Caleb. “But a rando on Tinder? Why not? There’s no one that’s going to catch you.”

The witch hunt then spiraled, as pissed-off singletons attempted to dox Caleb, and others shared the equivalent perpetrator in their own dating ecosystem.

Then, the pendulum swung the other way: Caleb did nothing wrong, everyone has the right to ghost.

“Welcome to dating in the twenty-first century, ladies,” wrote SpectatorWorld’s Ben Sixsmith. “Caleb sounds like a cad but if you want casual dating, don’t be too surprised when people treat you casually as well.”

Many went on to say that calling Caleb out — in a trial by TikTok — was even more “morally dubious” than any amount of ghosting or “love bombing” Caleb committed. Besides, as Buzzfeed’s Katie Notopoulos argued, “did he actually do anything so bad?”

Alas, we may have really and truly beaten this dead horse to the ground.

“West Elm Caleb does not deserve to die,” wrote Becca Schuh. “But West Elm Caleb, and all men, (and, I know, women,) should think before they act on the apps. Everyone should make the effort to be a decent human. West Elm Caleb’s punishment has perhaps been too great for his crime, but hopefully it nonetheless taught him a lesson.

Schuh wrapped it up better than perhaps any of the internet’s hottest takes on this most-embarrassing cultural touchstone.

“This also all taught me a lesson: I’m so tired.”

Read on to find out how Hinge’s hottest specter first took over social media.

What is a “West Elm Caleb”?

Caleb is the one who never texted back after a seemingly amazing first date, leaving no explanation as to why he wouldn’t follow up after going out of his way to charm.

At its most extreme, experts call it “love-bombing” — when a date showers you with compliments, gifts and affection in a twisted bid to gain immediate trust, only to later disappear.

Indeed, the culture of rapid swiping for dates and algorithmic compatibility has facilitated the internet dating pool’s more egregious womanizers.

He’s allegedly no urban myth. The man dubbed unaffectionately “West Elm Caleb” is one Caleb Hunter, 25, according to internet sleuths, as well as some of those alleging to be his victims.

The woman who initially went viral, TikTok’s @meemshou, inadvertently launched the hunt for West Elm Caleb when she shared her own experience with a crappy Caleb — who turned out to be a different guy from the one that has captivated dozens of women IRL, and millions on social media.

In a now-deleted clip published last week, she explained that her initial viral video was created “to make a joke about this very tall Caleb” she briefly courted in NYC, which pulled in more than half-a-million views — “but I kept having girls comment being like ‘is this West Elm Caleb?’ ”

“I was so confused,” she told followers. “But then I get a DM from a Caleb who says he’s also very tall, and I click on his bio, and it says ‘West Elm furniture designer.’ ”

After countless women came forward to cross-reference details about the roving Romeo, it’s since been revealed that the prime suspect is a one Mr. Caleb Hunter. An alleged screenshot of his Hinge profile, depicting a young man with a cropped beard and the tell-tale mustache, and a tagline that described him as a “designer at West Elm.”

There are many versions of a West Elm Caleb — a man who sends you an excessive amount of love notes and then disappears without any explanation.

What did West Elm Caleb do?

This dating dweeb allegedly has sent at least one unsolicited nude photo to a date, ghosted women, and sent his Spotify playlist to more than one gal, telling each that he made it just for them.

He seemingly also dated several ladies at once and fibbed about how much he uses Hinge. But his main offense has been bombarding women with love messages on Hinge and then suddenly peacing out and leaving them hanging.

Where is West Elm Caleb now?

The dude has been gone like the wind and hasn’t been spotted since his antics went viral. He has scrubbed his social media accounts across various platforms and hasn’t commented on anyone’s videos.