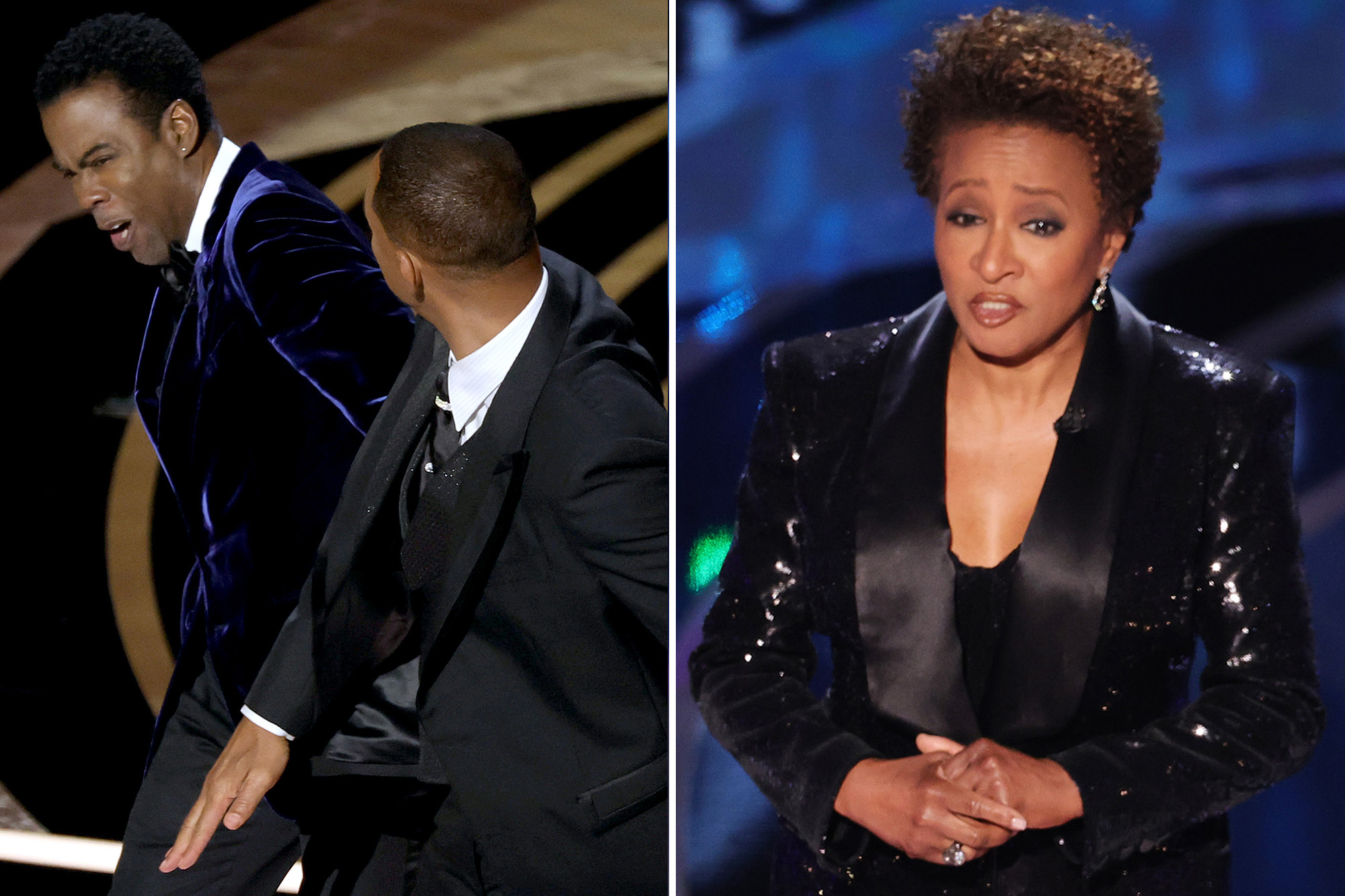 Hollywood may be moving on from Will Smith’s spectacular slap of Chris Rock at the Oscars — but Wanda Sykes isn’t forgiving or forgetting.

The 58-year-old comedian — who was co-hosting the awards show when Smith stormed the stage and slapped comedian Rock across the face — says she is “still traumatized” almost two months on from the incident.

Sykes made the admission in a new interview with People magazine, adding that she was appalled the actor wasn’t booted from the theater after the violent act.

“I can’t talk about it. I get emotional,” she stated. “I couldn’t believe he was still sitting there, like an a – – hole. Shouldn’t you be sitting there with a lawyer or LAPD, motherf – – ker?”

Sykes told the publication that she believes Smith acted out because he is struggling with personal issues — but she doesn’t have much sympathy.

Sykes was hosting the Oscars on the night Smith stormed the stage and slapped Rock. She is pictured center with her co-hosts Amy Schumer (left) and Regina Hall (right).Getty Images

It’s not the first time the comedian has spoken out against Smith since the March 27 slap.

Two days after the incident, Sykes appeared on “The Ellen DeGeneres Show,” similarly saying she was angered by the fact the actor wasn’t escorted out of the event.

Less than an hour after the assault, Smith won the Best Actor Oscar for his role in “King Richard,” and even received a standing ovation from the audience.

“For them to let him stay in that room and enjoy the rest of the show and accept his award, I was like, ‘How gross is this? This is just the wrong message,’ ” Sykes told DeGeneres. “You assault somebody, you get escorted out of the building and that’s it. For them to let him continue, I thought it was gross.”

She added: “I just felt so awful for my friend Chris. It was sickening. I physically felt ill.”

Sykes hasn’t been holding back in her critiques of Smith’s behavior. Just two days after the assault, she told Ellen DeGeneres she was “sickened” by his assault on Rock. ABC via Getty Images

Sykes isn’t the only star to publicly slam Smith for the assault — which occurred after Rock made a joke about Smith’s wife, Jada Pinkett Smith, who suffers from alopecia.

Comedian Jim Carrey said he would have sued Smith, while Steve Harvey said he “lost a lot of respect” for Smith.

Meanwhile, the “Independence Day” actor is continuing to lay low in the wake of the assault.

Smith (right) slapped Rock onstage at the Oscars after the comic made a joke about Jada Pinkett Smith bald head.

Last month, Smith was spotted in Mumbai, India, amid reports he still hasn’t apologized to Rock over the on-camera assault.

However, Smith has resigned from the Academy of Motion Picture Arts and Sciences following the uproar about his actions, and he has additionally been banned from any academy events for the next 10 years.

Elsewhere, Rock has also been keeping a low profile — but he did reference the slap during an appearance at the Royal Albert Hall in London last Thursday night.

Less than an hour after the assault, Smith received the Best Actor Oscar for his role in “King Richard.”

“I’m OK, if anybody was wondering,” Rock quipped. “I got most of my hearing back . . . [But] anyone who says ‘words hurt’ — has never been punched in the face.”

The funnyman said he wouldn’t be speaking further about the incident — unless he received a hefty check from a streaming service.

“People expect me to talk about the bulls – – t. I’m not going to talk about it right now. I’ll get to it eventually — on Netflix,” he joked.

Katie Austin, Denise Austin’s daughter, is new SI Swimsuit rookie
Megan Thee Stallion nearly naked for Billboards 2022 performance
We use cookies on our website to give you the most relevant experience by remembering your preferences and repeat visits. By clicking “Accept All”, you consent to the use of ALL the cookies. However, you may visit "Cookie Settings" to provide a controlled consent.
Cookie SettingsAccept All
Manage consent